More than 65 people are believed to have been killed in yesterday's 6.3 earthquake in Christchurch, and authorities are warning that the death toll is likely to rise. There is widespread destruction in the central city and rescue teams are working to pull trapped people from the rubble.

09:05 Michael Meade, Pubic Affairs Manager, Civil Defence; and Paul Burns, the task force leader of Urban Search and Rescue, at its base of operations in Latimer Square

09:25 Jessica Maddock, RNZ reporter, who is outside the CTV building

09:35 Laura McConchie, a 111 operator whose house has been wrecked.

One of the board members of the Crusaders rugby franchise has been been killed in the disaster.

09:50 Bruce Davis whose wife works as an enrolled nurse at Kate Sheppard rest home. Residents have been evacuated.

10:35 Bruce Irvine, Chair of Pyne Gould Corporation, the building occupied by the company in central Christchurch crumpled in the quake yesterday.

10:40 Kirsty Clemence, who was rescued from the roof of the Pyne Gould Corporation building yesterday

10:50 Steve Gurney, resident of the seaside surburb of Sumner.

11:05 Nilgun Kulpe a counsellor with Relationship Services in Christchurch who was working on the 5th floor when the earthquake struck

A camera sent down into the CTV building has found a pocket of 15 people alive but trapped.

11:50 Mike Ardagh, Acting head of the emergency department in Christchurch

The emergency department at Christchurch Hospital is extremely busy with many seriously injured people.

11:55 Jessica Maddock, update from RNZ reporter, who is outside the CTV building

11:57 Don Rood, Head of RNZ News, with an update on the extra number of armed forces personnel and resources being sent to Christchurch 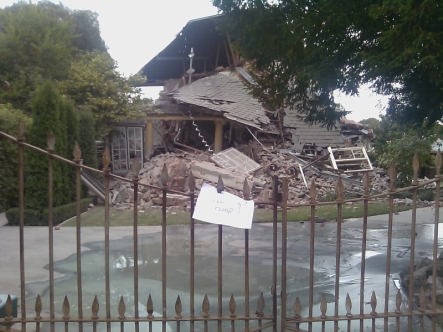 A damaged house in Christchurch. Photo by Kip Brook.