Haami Piripi, Chairman of Te Runanga o te Rarawa (the tribal council that represents the interests of 23 marae in the Far North)

Deborah Carlyon - her company Stuart & Carlyon was one of only three companies that passed a Consumer NZ survey of 17 financial advisors; Chris Lee, Kapiti-based stockbroker and outspoken critic of finance companies. His company provides advice, stockbroking and investment services; and Annabel Cotton, Commissioner for Financial Advisers with the Securities Commission - she's overseeing the new Financial Advisers Code which is set to be introduced late 2010.

Philip Lord Norton of Louth, Lords of the Blog.

Peers in the House of Lords have entered the blogosphere with their own blog commenting on issues of the day and even a weekly constitutional quiz. 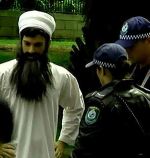 Craig Reucassel and Andrew Hansen, members of The Chaser, the notorious Australian satricial comedy group. Their show, The Chaser's War On Everything, has been on TV since 2006 and has become notorious for pushing the boundaries - they're probably most famous for creating a fake motorcade to get someone dressed as Osama Bin Laden through the security checks at Sydney's APEC meeting in 2007. Just published The Chaser Annual 2009 which marks ten years of the group.

Just This by Brian Turner
Published by Victoria University Press

The original award-winning story of love, life, wine and angels stretching out from Burgundy at the beginning of the 19th century

Artist: Kings of Convenience
Album: Declaration of Dependence
Track: Boat Behind
Video: I'd Rather Dance With You

The New Zealand-Bahrain soccer game and why it's 1982 again for the All Whites' supporters plus what the IRB is looking at doing to improve rugby safety.

11:45 Week That Was with Radar and Gemma Gracewood