09:05 Winston Peters and the Spencer Trust

Rex Widestrom, former NZ First staffer who claims the Spencer Trust was set up around the time of the Winebox inquiry to funnel anonymous donations to fund legal battles; and Sir Robert Jones, millionaire who donated $25,000 to New Zealand First which was put into the secretive Spencer Trust - Sir Robert says he thought he was giving the money to NZ First and is seeking an explanation of what the money was used for.

Fred Harrison, Research Director of the London based Land Research Trust and Director of the forecasting consultancy, Economic Indicator Services. He's researched the history of business-cycles over the last 300 years and formulated a theory of an eighteen year boom-and-bust cycle, based on land value fluctuations. 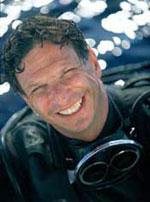 David Doubilet (left) is an undersea photographer with an extensive portfolio. He has photographed over 60 stories for the National Geographic Magazine where he is currently a contributing photographer-in-residence.

10:45 Reading: The Mesmerist written and read by Barbara Ewing.