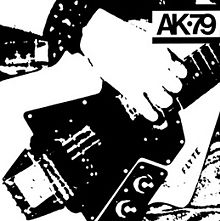 The Terrorways, Proud Scum, Spelling Mistakes, Scavengers and the X-Features came together thirty years down the track, bringing together their historical import with the high-powered rock and roll fun that had earned this music a place in history in the first instance.

Radio New Zealand National was there to record the performances and speak to the musicians.

'AK79 Live' documents what happened on those two nights, and illustrates how pop subculture from the late 70s continues to have an impact on both the participants and the course of local popular culture itself.

Part one features Proud Scum and The Scavengers.