Hello Sailor - Live at The Powerstation 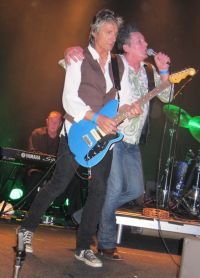 This concert features legendary bohemian-rockers Hello Sailor, a band who has been around in various guises since 1975 and who’ve possibly left drops of sweat on every concert stage in New Zealand.

Although formally splitting in 1980 after two albums, there have been numerous reunions and a further four albums released since. Among the group’s many and varied achievements, first album Hello Sailor released in 1977 became the first NZ-made record to be certified gold, and the band entered the APRA NZ Hall of Fame in 2011. The group’s last album Surrey Crescent Moon was released in 2012.

Tonight though, we remember Hello Sailor and join the group performing in front of a heaving Powerstation in November 2011, at a concert with co-headliners Dragon to celebrate 36 years of musical activity.

Produced and engineered by Andre Upston for Radio New Zealand National on 4 November 2011.