Aotearoa’s Godfather of Hip Hop Darryl Thomson, aka DLT, and long-time Māori composer, the late Te Taite Cooper will receive the Iconic Award, which recognise those who’ve made a significant contribution to Māori music.

They wrote ‘E Tū’ when they were still teens. It tackled themes of inequality and racism, and encouraged young Māori to draw upon the strength of their tīpuna, challenging them to “e tū, stand proud, kia kaha, say it loud”. 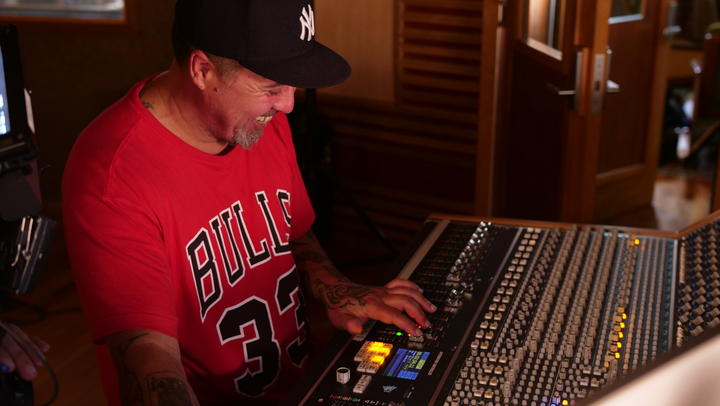 The story behind ‘E Tū’ is retold in the RNZ Music video series NZ Hip Hop Stand Up, which features interviews with DLT, Dean Hāpeta), Teremoana Rapley and Bennett Pomana.

Aside from his work with the posse, Darryl has had a very productive solo career, releasing two albums of his own including The True School, which featured the chart-topping single ‘Chains’, a collaboration with Che Fu.

‘Chains’ won Best Single at the 1997 New Zealand Music Awards and Che-Fu was awarded Best Male Vocalist for the song.

DLT’s second album, Altruism, came out in 2000 and remained in the Top 40 Album Chart for several weeks. It included singles, ‘Liquid Skies’ and ‘I’m Your MC’.

DLT will receive the Lifetime Contribution to Māori Music Award, Te Tohu O Manawa Rahi Ki Te Ao Pūoro Māori, recognising his work as a rapper, songwriter, producer and mentor for many young Polynesian hip hop artists, as well as being an advocate for all things Māori.

Te Taite Cooper (Ngāti Kahungunu) composed ‘Te Hokinga Mai’ with Bishop Takuira Mariu and the Pakipaki Community, to celebrate the return of taonga which featured in the Te Māori Exhibition that toured North America in the mid-1980s.

The waiata remains one of the most well-known and celebrated songs of Ngāti Kahungunu.

The song was recorded in 1986 after Te Taite gifted it to Pakipaki Bilingual School, which he’d attended, and was tutoring for at the time. It was performed by students and featured in a television documentary about the Te Māori Exhibition.

Te Taite had enjoyed a busy and prosperous career abroad, before returning to New Zealand in the mid-1980s. He was the musical director and choreographer for kapa haka group Mauri Ora Māori in Los Angeles from 1962-63, which he described as perhaps the first ‘mini kapa haka group’ (it had just six members) to leave New Zealand.

Their routine was made into a 20-minute film for the National Film Unit, and use as a school Māori resource on kapa haka, as well as being shown in New Zealand and abroad as a tourist promotion.

The group toured California and Arizona performing one hour programmes in junior high schools throughout 1962 and 1963.

He began his academic career after graduating from Victoria University with a Dip Māori in 1992 and a B.A. in Education in 1994. He worked as a tutor, tikanga advisor, and composer, and was completing his thesis "Framing the Māori Image" at the time of his death.