Run the Jewels on US Politics and their new album '4'

Run The Jewels' new record 4 is the album for now. Released with perfect timing, it discusses issues not only prominent in America right now, but around the world. 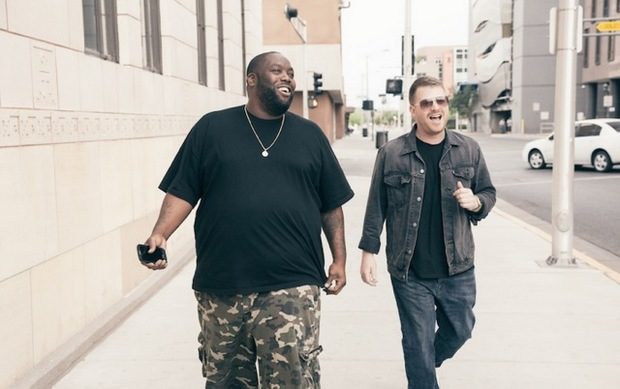 Music 101's Charlotte Ryan spoke with Run The Jewels' Killer Mike (Michael Render), and EL-P (Jaime Meline) about US politics and how their new album is the soundtrack for today's political uprising.

The positive reaction to 4 has been "pretty overwhelming" for EL-P, and "a little scary" sometimes.

"What it means is, the things we're saying are now falling on ears that are really attentive," he said. "For a musician, for a writer, for an artist, that's something that you always want. You always want a receptive audience, but you don't expect it."

Describing himself and Killer Mike as "a couple of class clowns", EL-P said the pair's strong sense of humour was an important part of connecting with listeners.

Killer Mike, who grew up with his grandparents, said one phrase he often heard as a child was "you gotta laugh when you wanna cry", and it was something that had always stuck with him.

"There really is an absurdity of laughter and joy in perilous times, if you remain hope-filled and other people are sharing that experience with you," he said.

He also credited his grandparents with instilling a sense of political and social awareness in him at a young age.

"My grandparents were born 1922, 1932, so there was no grand political epiphany, 'oh my god, blacks are not treated well or poor people', it was an understanding from the very beginning that the world is fighting against you in terms of the truth that they told," he said.

A lot of his political awareness came from watching movies with his grandfather, like the original Planet of the Apes series, or reading books like George Orwell's Animal Farm, which helped him to understand the dynamics of power in society.

"It was media that did it, it wasn't necessarily an incident, because I understood what apartheid and Jim Crow were because my grandparents would tell me and were honest about what it was, but when I read this book and saw these movies it locked in for me all these ways that this is what it is."

Killer Mike's father was a police officer when he was growing. Growing up in Atlanta, Georgia, all his "heroes and villains" were black.

"It wasn't like I was just scared of officers, the power that officers had, my dad helped me understand early. Policemen have total power over you in some situations and it's up to us to regulate that power as a society so that it's not abused.

"So I've met my share of good and bad officers and in most cases, because I'm in Atlanta, they look like me," he said.

The new Run the Jewels album is a nod to the so-called "golden era" of hip hop, with appearances from legendary producer DJ Premier of Gang Starr and Greg Nice of Nice and Smooth on the track 'Ooh La La'.

While EL-P said it was a conscious move to a degree, they don't make music that is "old school".

"We knew that we really wanted to give a nod to what our influences were, because the spirit of that music is still what drives us," he said.

"Now we're people who love new music, we're not that type of rappers who think that everything was better back in the day, we're 100 percent into new music but we're honest about what our influences are, what the spirit of the stuff we fell in love with in terms of hip hop music is."

As well as being available to purchase and stream, Run the Jewels 4 is also available as a free download - which EL-P said was because they didn't want money to be the deciding factor in whether someone heard their music or not.

"There are people that cannot afford Spotify, Tidal, Apple Music, Amazon, it shouldn't be prohibitive, it shouldn't be that you can't listen to or join in the spirit of the music that we're making simply because there's a paywall there," he said.

"We just knew that we wanted the hearts and minds of people and we didn't want to be just about the cold hard transaction."

While it seems appropriate that the album has been released during an election year - as was the case with two previous albums - this was just a coincidence, according to the duo.

"I kind of think of Run the Jewels as these two stoned friends like stumbling through history," EL-P said.

"We're like the Forrest Gump of rap basically, we literally can't help but somehow trip and stumble our way into these times and it's only simply because of a just a bevy of random circumstances and things that happen."

Despite the possibility of a second term for Donald Trump looming on the horizon, Killer Mike said he wasn't too worried about the elections.

"I'm not worried because my community has always managed to survive and some of us even found a way to thrive as we search for true constitutional rights and equality within the system," he said.

However, EL-P said he was personally had some concerns.

"We know history and we have seen that there are people who rise to power who ultimately, they're not playing the same game," he said.

"I think the current president is well on track to inhabiting the shoes of previous dictators and I think there's nothing but death and pain that can follow that. So yeah, I do need him out of there, personally for me to feel a little bit better."

While some have suggested that Killer Mike should get into politics himself, he said that wasn't an option for the next five years.

"I'm having fun, I'm making rap music, I'm smoking joints, I get to go to the strip club with my wife," he said.

"I think that would be very selfish and egotistic when our music is actually encouraging people who are getting into politics, hopefully from the ground level of organising".