Finally, the working-from-home playlist you’ve been waiting for

Working from home can be great. Who doesn’t love wearing pyjamas and hanging out with the cat? But it can also be really difficult to stay focused and motivated.

To add some structure to your day (and maybe some inspiration), RNZ Music's Tony Stamp - aka Tony Tunes - has put together an hour-by-hour playlist to guide you through. 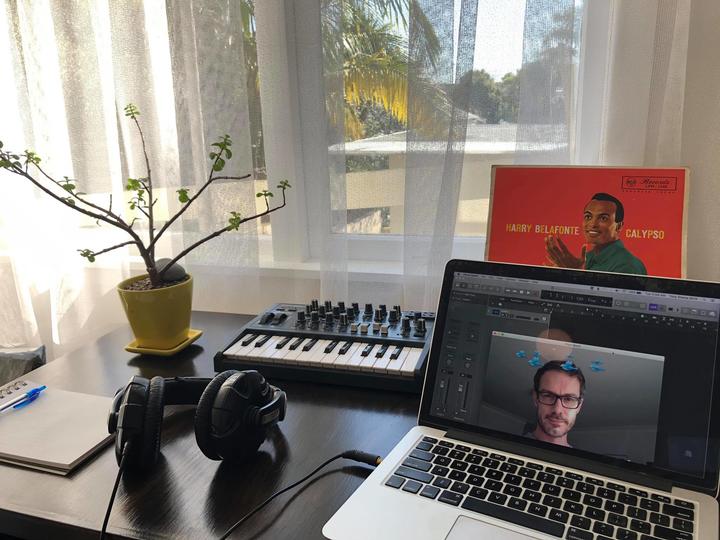 These aren’t my favourite songs or anything. Well, some of them are. They’re tunes that’ve been helping me stay productive and get through the day.

I picked tracks that suit a certain makeshift-office-in-the-lounge kind of vibe. Not too intrusive, but not too wallpaper-ey either. OK here we go.

Let’s be honest: as much as you might love your job, no one’s springing out of bed like ‘let’s do some work!’ You need to psych yourself up for it, and for me this one is perfect. Taken from the soundtrack to the Serge Gainsbourg biopic A Heroic Life, it’s a cover of Serge’s ‘Initials B.B.’ performed by the Bulgarian Symphony Orchestra. It will make checking those 9am emails feel like a cinematic adventure. You are the hero, and your ‘reply all’ is pure victory.

It’s time to take a video meeting with the team. You don’t want anything too distracting, but you want to maintain a good vibe. What better than some gentle finger picking and baritone vocals courtesy of Mr Bill Callahan, here working under his alias Smog. This one’s from his album A River Ain't Too Much to Love, but really anything from his back catalogue will fit the bill.

Ok, you need to get cracking into the heavy duty stuff now. For me that involves things like research and editing audio, but this 1972 synthpop classic should suit a range of tasks. Apart from the delicious snack of the title it reminds me of little worker ants scurrying around fulfilling their duties. Picture yourself as one of those ants.

Your attention could start to slip here. The home is filled with distractions of course, but if your neighbourhood is anything like mine there’s going to be plenty of commotion going on outside. To stay focussed we’re going to need some four to the floor: let’s take it up a notch with DJ Seinfeld. Just try and ignore the sample that hits midway - it’s Bob Geldoph talking about his wife Paula Yates leaving him, and you could get a bit weepy.

Break time! At home the balance between work and life can get a bit blurred, but it’s important to delineate. Be it lunchtime yoga or a stroll around the block, try to chill! Mary Lattimore and her magical harp can work wonders, and as the title suggests, this song is eleven minutes and thirty seconds of pillowy bliss. Ahhh.

Maybe you’ve glanced at Twitter, or heard a news bulletin, and the huge existential weight of this pandemic is weighing on you. Listen to this song and embrace its message (literally the only lyrics are ‘we have no fear’). You gotta love how the music backs up the sentiment, especially that “UH” that first happens around eight seconds in. Screw you, fear!

Still, be fearless within reason yeah? Keep washing your hands and social distancing.

Not a million miles away from 2), this is a feelgood strummer that has cheered me up for literally decades. Clap along, and spare a thought for everyone who isn’t lucky enough to be able to work from home. Maybe they can’t work at all. People are good. Up with people.

Look nobody knows the value of a hard day's yakka more than the Clipse boys, right? Beyond that the horns in this version just scream 'afternoon' to me. I know, the kitchen is right there, but ignore that urge for a cheeky wine/ beer/ whiskey etc and ride these vibes to closing time.

Ok, we got there. Just how much work you actually got done can be pretty variable, but these are unprecedented times. We’re all just doing our best. Knock off, sign out, and walk from the study/ garage/ garden shed into the lounge (or if you’re like me, remain in the lounge). You’ve earned it.