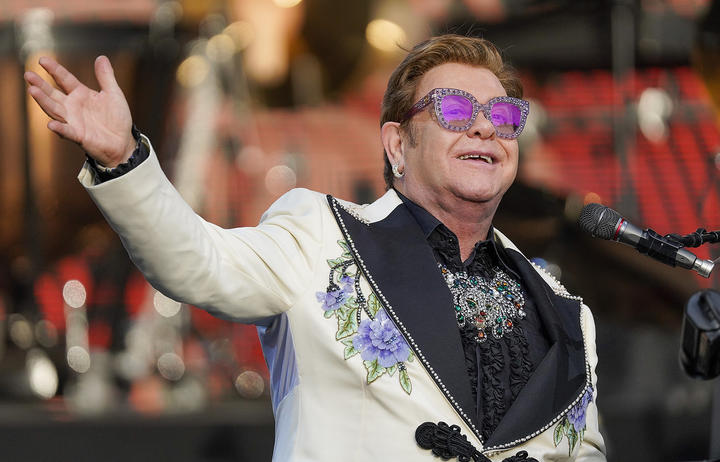 Elton John's songs are woven into the fabric of our collective consciousness. Growing up in the '80s I always knew his hits, from hearing them on radio, from old cassettes we'd put in the car, from movies (I saw The Who's Tommy way before any of it made sense to me) and TV. "Daniel my brother, you are older than me" would fly out of my mother’s mouth often, it’s one of her favourites. "Muuum" we'd groan in embarrassment. She's beside me at this concert, our last chance to see this God of the pop world play live.

At 72, he's retiring from touring to spend time bringing up his children. It's understandable, from the biopic Rocketman we've seen that his father wasn't available to him growing up, and it's nice to think he is is righting those wrongs and trying to be there at bedtime for his own sons.

This last tour to all the places in the world he's ever played will take three years. This concert at The Mission vineyard in Hawke's Bay is his second of six NZ shows. Twenty five thousand have packed picnic blankets, chilly bins, and whānau onto the natural amphitheatre, and it's a well-oiled operation, with fast moving queues. While it's a venue renowned for tipsy middle-aged women falling down the hill, there's only one instance of a drunk man falling over on us. Some of the the crowd is resplendent in ornate glasses, and glittering costumes in homage to the Elton's singular fashion sense. 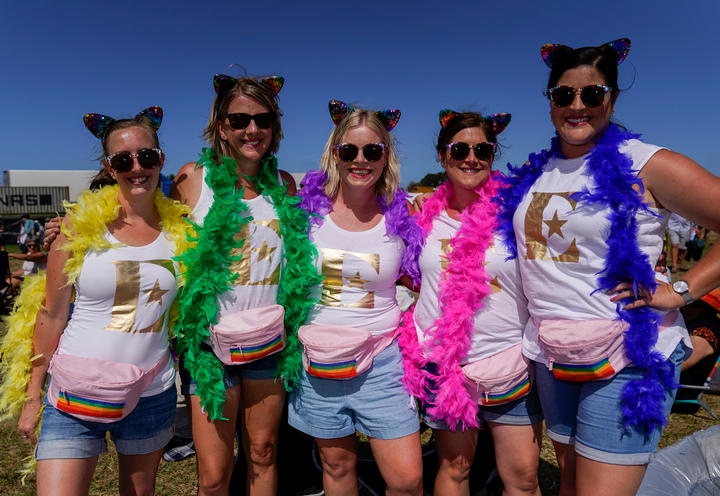 Straight out of the gate, there's the pounding piano chords of the song I really came to see - 'Bennie and the Jets'. He's performed the 1973 song around 2000 times, but he’s clearly still revelling in the audience's wild response to it.

He and his six-piece band follow it up with another from his seventh album Goodbye Yellow Brick Road - 'All the Girls Love Alice'. Never a hit, the song tells the story of a 16-year-old prostitute who sleeps with 'middle-aged dykes' and is found 'in the subway dead'. It’s a head's up that Elton John won't just be playing the hits, though there are plenty of those over the nearly three hour set.

'Rocket Man (I Think It's Going to Be a Long, Long Time)' is a highlight, played as the moon rises over the stage, and 'Someone Saved My Life Tonight' reminds me what a magical melody writer this man is.

I'm relieved to hear his voice is as rich as ever, and while he doesn't aim for the high notes in songs such as 1971's Tiny Dancer we can hear them ringing in our heads, and the audience sings them around us. He's toned down his outfits and antics, but his stamina and energy is still inspiring to witness.

Elton is generous with the stories he tells in between songs, describing his 53-year-long writing relationship with lyricist Bernie Taupin, how some of the songs came together, or what the inspiration for them was. They're stories he obviously tells word for word in every town he plays, but they're heartfelt.

There are extended solos in most songs, and the band, some of whom have been playing with Elton since the early '70s are having fun. Goodbye Yellow Brick Road opener Funeral for a Friend/Love Lies Bleeding is an incredible slab of Instrumental prog-rock which allows them to really let loose.

"This song was five-and-a-half pages long when Bernie gave it to me," Elton says. It's lyrics, about a displaced Native American man, could easily be spun into a blockbuster movie. If it hadn't worked out with Elton, I'm sure Bernie Taupin would have found his way into Hollywood as a writer.

Some of the visual elements of the show are distracting. There's a short film of random characters in conflict. People with pictures of well-known historical figures overlaid on them. Dancers, out of sync with the songs being played. What is the relevance of them? At one point the cameras pan down to the audience. There's two blokes in singlets, with their arms around each other, swaying to the music. It's a far more heart-tugging image. 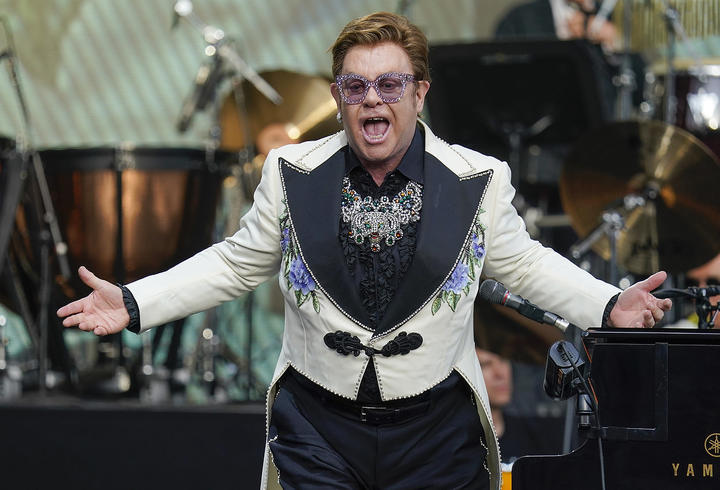 At other times it's Elton, with his flashy gap-toothed smile, and his band on the big screens flanking the stage. Towards the end of the show there are montages of this exuberant performer's life on stage and screen, cavorting around in a duck suit or 17th century wig, athletically flying out of his piano seat during his coked-up heyday. There's photos of young Elton with his mum, with Bernie Taupin, with superstar contemporaries, and as a Simpsons and Southpark character. There's Elton with his husband, holding their baby. He's had an incredible half a century, and there's no modesty in this celebration of his career.

I'm strangely unmoved by his exit speech, his reasons for quitting the road, how much his fans have meant to him, how incredibly lucky he feels to have lived this life. Perhaps it's that there's nothing spontaneous in this spiel, or maybe it's because I know we have these songs forever, and his presence on this earth is so well recorded that we could never forget him.

He sends Crocodile Rock out to the fans, and we howl the “la lalalala’s” up to the moon by ourselves. We've got this.

Generations of families are around us, mothers dancing with sons, grandparents tapping their knees, middle-aged couples looking at each other knowingly. Elton John has songs appropriate for the big moments in every human's life, from birth, to falling in love, to slinking off to retire.

Goodbye Yellow Brick Road is the last song, a fitting send off about wanting to return to a simpler way of life.

Elton takes off his glittery pink robe. Underneath is a tracksuit, and it’s easy to imagine him at the side of the pitch at his son's football games, cheering them on as we've cheered him over the years. He turns and walks up the yellow brick road, off our stages, but not out of our minds and hearts. 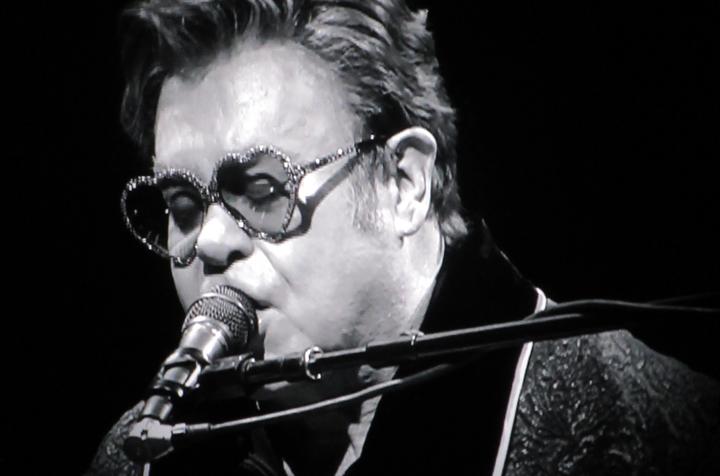 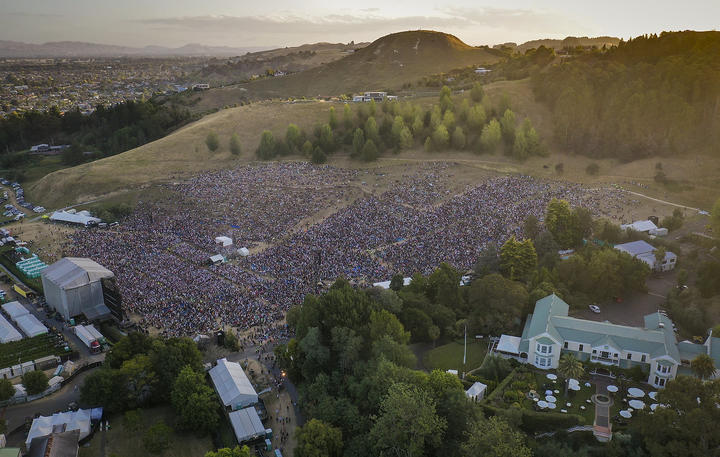