Zambian rapper Sampa the Great came to prominence through the Australian music scene and her star is on the rise. She's just been on Jools Holland, played Glastonbury and now squeezes in a live session for us on her sold-out NZ tour.

Sampa The Great’s debut album The Return is a a lively and jam-packed exploration on the theme of 'home', delivered by a Zambian born-Botswana raised, well-travelled young artist Sampa Tembo.

But The Return could also be about the second chance at life after Sampa gave herself a near-death experience in Sydney’s Gordons Bay.

“I remember it as a moment in my life where I actually kind of gave up and I was like ‘okay this was too much weight’.”

“It shook me for awhile because a friend actually passed away in the same place.”

In her song ‘Heaven’ there is a line, almost an incantation, where she repeats the words ‘breath before death’.

The line, Sampa explains, “is an ode to life and how life is a rhythm of breath and death.”

When reflecting on that on that day she nearly died, she refers to it as her “growth spurt moment.”

“It’s one of those moments in my life where I actually stopped everything and it caused me to look within myself.

Until then Sampa The Great had been exploring the world and testing out her ambitions to be a professional artist which she admits she was scared to do for some time.

She was known as a rapper through her high school years in Botswana, though she knew that her family wouldn’t take to kindly to her wanting to become a musician.

“No one in my family has done artistry or music as a whole even though they are all artists. It’s a career no one has done.” 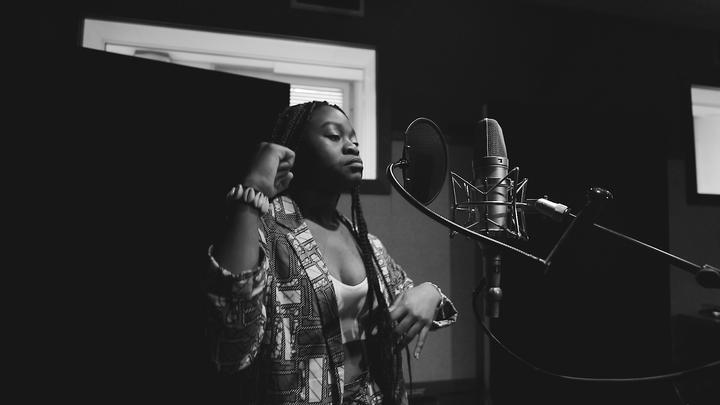 The determination and crafty cunning of the middle child in the Tembo family is evident when Sampa talks about winning her family over to allow her to study internationally.

There was a “conflict of trying to communicate what I actually wanted to do versus what would sound like the legitimate ‘job’.”

Aged 19 she moved to San Francisco and enrolled for a sound engineering course because “it was more culturally acceptable” than studying visual media, which is what she eventually did in her final year.

“That’s not a usual thing,” concedes Sampa when considering how many Bemba-speaking international students pursue a creative arts degree.

What she lacked in language and shared humour and cultural references, she found in music.

She finished her studies in Australia, and just before she was to return home to Africa she took the name “Sampa The Great” and embarked on her dream to be a professional artist.

“I had to prove to myself that I can do this one thing that I actually really love doing but I am too scared to go for.”

That was the year Sampa released her debut mixtape - “I didn’t tell my parents about it, and then it started gaining attention and then it was time to explain why The Great Mixtape was on the radio.”

Coming to prominence in Australia turned out to be a “huge problem” for Sampa.

People would say “You’re an Australia artist, that’s your description, that’s who you are. Finished. But I actually have an origin story.”

Hence The Return being a deeply honest allegory for Sampa. Before the album was made she visited Zambia and Botswana. It was the first time her extended family and friends had a glimpse of who she had become abroad.

“The initial kick was the theme of home, because a lot of people in Australia are migrants, or they’re not from here or First Nations.”

“Whose home we are on and how important home is to our identities... kicked off a whole conversation on what that is.”