I was pretty pumped to be heading along to Fleetwood Mac last night. How could I not be? Their songs are built into our DNA.

When aliens dig up our remains in a bajillion years they’ll find 40 million copies of Rumours amongst the many layers of chicken bones.  They'll assume that our world was populated by small, flightless birds with a penchant for chill pop songs with a cosmic hippy edge.

So much has been written in the last 18 months about Neil Finn joining Fleetwood Mac. People wondered if the shows would be the same, if they’d be as good without lead guitarist Lindsay Buckingham.

You get the feeling Finn and fellow new member Mike Campbell (lead guitarist of Tom Petty & The Heartbreakers) are in the band for their good energy as much as their considerable talent. The new dudes are perhaps there to temper the intra-band drama Fleetwood Mac are known for. 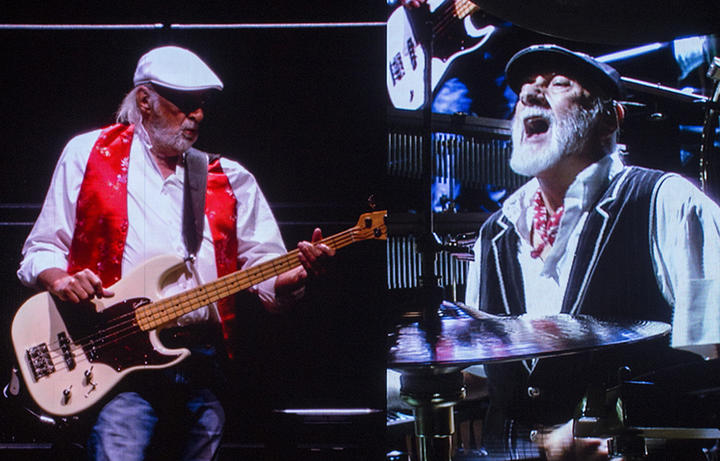 As the crowd take their seats with their Mumm champagne in plastic cups, the band bursts into instant glory, running through 'The Chain', 'Little Lies' and 'Dreams'. It’s such a powerful trio of songs to open a concert it’s almost overwhelming.

The band, as it always has, allows the different members to shine at different times. Stevie Nicks is still a beguiling, rock-star talent. She might not aim for the high notes on ‘Rhiannon’, but who can blame a singer in her 70s for losing a bit of range?

But when she goes into full witchy mode on tracks like ‘Gold Dust Woman’ it’s mesmerising. The band swirls around her entrancing performance as Campbell and Finn trade blues licks from a distant, tripped-out star system.

When Nicks duets with Finn on ‘Landslide’, her voice really comes to life, sounding every bit as iconic and timeless as on the original recording.

Christine McVie’s voice is strangely quiet through much of the set. It’s only when she steps out from behind her wall of keyboards for a barnstorming rendition of the 80s classic ‘Everywhere’, that we really hear her. I couldn’t really understand why her voice was mixed so quiet, it seems too simple an error in an otherwise flawless production. 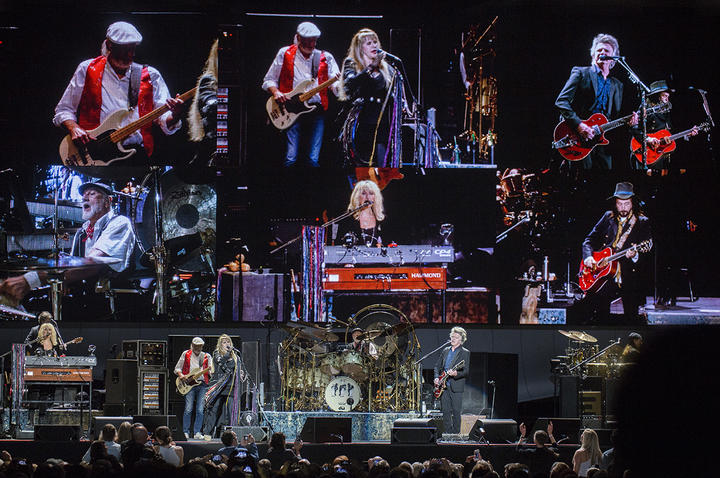 Regardless, her rhodes piano solo kicks the meandering jam of ‘Black Magic Woman’ into life. She’s a great player who seems like she’d be quite comfortable just playing her keys, but just happens to have written a lifetime’s worth of huge hits.

Their version of ‘Black Magic Woman’ went into a bit of shitty jam, lost its way, found something good and then accelerated into some really great jamming. I loved it. Not knowing where something’s going and then playing your way out of a hole is a sign of a really good band. It was refreshingly unslick.

You get the sense that’s the way drummer Mick Fleetwood and bassist John McVie like it. One of the world’s greatest, and surely longest serving rhythm sections, they aren’t playing like a bunch of hired gun, boring session musicians, they’re a real band with all the flaws and subsequent magic that brings.

And there is magic. Even Mick’s bizarre, mindbending, sex-chanty drum solo wins me over. He’s a strange, sassy giant and I love him. He screams, “Are you with me?” as he pummels the drum kit, and it’s fair to say we all are.

If it was a religious cult I’d be signing up for membership at this point. He plays every song like a man possessed. He also loves having Finn in his band, and his long rambling introduction to ‘Don’t Dream It’s Over’ is effusive and genuine. 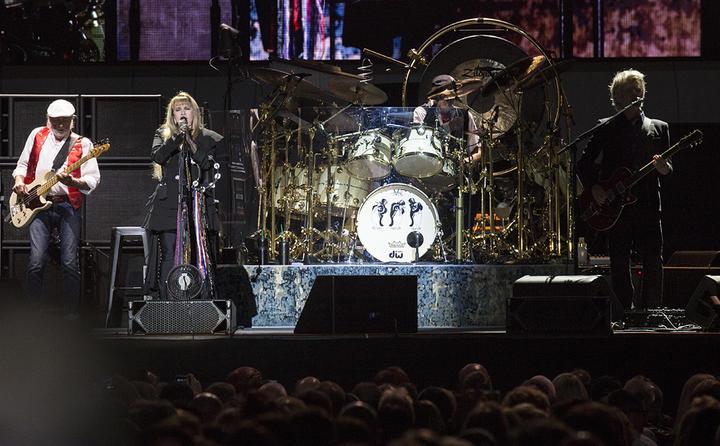 But even as as the songs carried me away, the occasion was somewhat clouded for me by news of the death of one of my absolute favourite songwriters, Daniel Johnston

A cult figure, Johnston’s brilliant songs have triumphed in their own utterly unique way, despite decades of severe mental health issues. His struggle at the boundaries of popular music felt somewhat anathema to a huge arena rock concert by one the highest selling bands of all time.

It took the new boy in the band, Finn, to remind me of a different, earlier era of Mac where those worlds weren’t so far removed. Peter Green was a founding member of Fleetwood Mac, a mercurial guitar genius. His songs are fragile and haunting and really good. He wrote a no. 1 for the band with the instrumental ‘Albatross’.

It was Green who wrote ‘Black Magic Woman’, which went on to be a huge break-out hit for Santana. Green left the band to deal with mental health issues and spent much of the 70s and 80s in and out of institutions.

So when Finn spoke about the genius of Green and launched into ‘Man Of The World’ it was a moment of musical connection beyond the singalong hits. In among the familiar and the glorious here was something rarer, more precious and just as powerful. 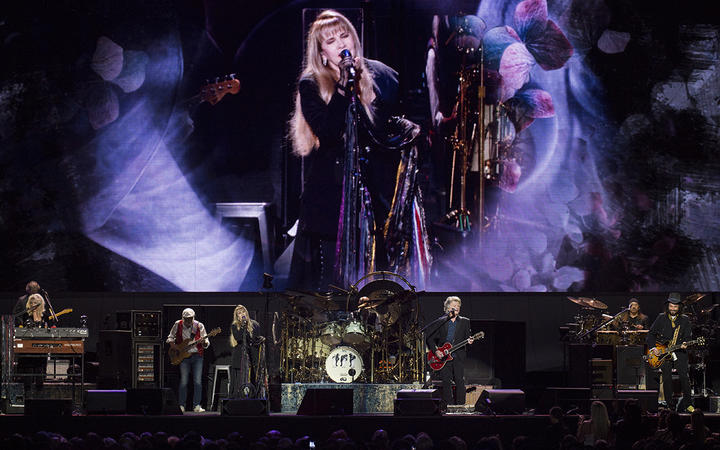 Neil also absolutely slays ‘Don’t Dream It’s Over’. I’ve seen this song live many times, I’ve played it live, but tonight it feels mystical. Somehow putting it in a setlist with so many classic tracks highlights just how great it is.

The crowd goes bonkers for this and the Split Enz classic ‘I Got You’, and if I have one negative for the show, it’s that really, I’d love one or two more of Neil’s songs in there.

By the time they encore with Tom Petty’s ‘Free Falling’ in tribute to Nicks' good friend and Campbell’s life-long band mate, two hours have flown by.

They’ve played every Mac song I wanted to hear and three Peter Green-era songs, when I expected none.

As Campbell plays ‘Free Falling’s great 12-string guitar bridge that he must have performed a thousand times before, I’m left thinking that every player in this band has contributed something iconic to the world of music.

What they do together now isn’t always perfect but it’s always magic. 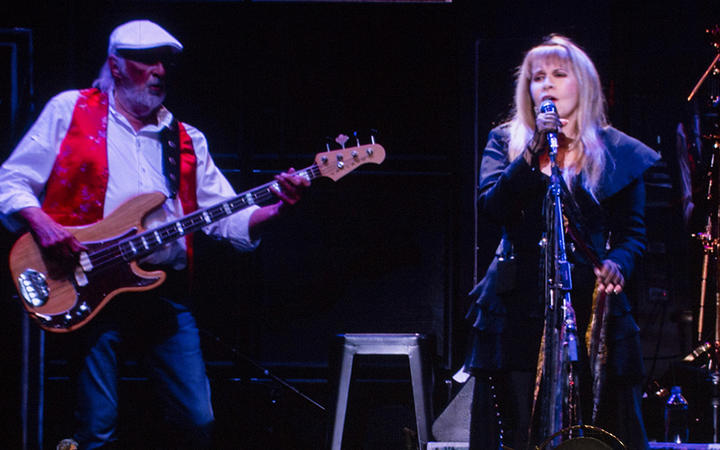