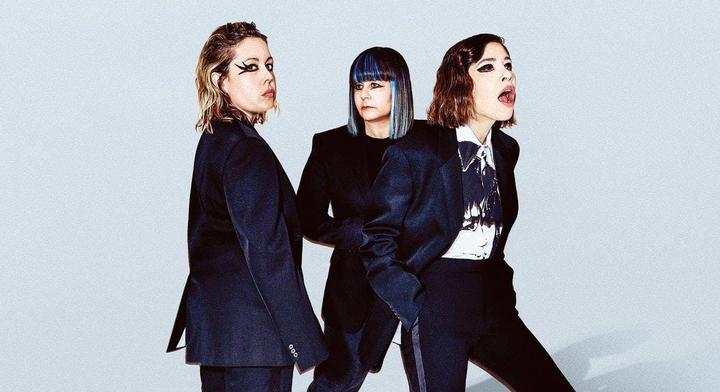 Tell us about the name of the album. What does The Centre Won't Hold mean?

The Centre Won't Hold is an album that kind of puts the listener into the middle of a Doomsday catastrophe. We're definitely hitching on the idea of the election and everything that's come after it and our country, and the kind of cultural moment that we're in right now. It is a reference to the William Butler Yeats poem. That's where the title comes from, and so many people have been influenced by that poem in really difficult troubled times. The kind of systems and normality that you rely on, it tends to just completely fall apart.

Was this album a way of processing what is going on politically in America at the moment?

I mean, I think it was just a really natural outlet for us. In terms of having an outlet, to be able to talk about the state of things in our country, and the way that women have been treated in our country, especially recently. It was like, a really natural outlet to be able to write songs that kind of grapple with that reality. And I think that, you know, that conviction is something that's really important, [just] as your friends are really important especially when everything seems so difficult.

It wasn't ever meant to be, that we came up with any kind of solutions or answers like that would be much too easy to be able to do in a rock song or a rock album, it's just, we really wanted to be able to touch on those things.

So how did it affect you emotionally?

Yeah, making the album was extremely cathartic, and actually really fun. You know, being able to play with these ideas and play with your character in the studio is extremely fun. And it gave us the ability to try on all these different voices, some of which are resisting, and some of which are observing, and some of which are just indulging in the chaos, you know, and so, that gives you a sense of control, it gives you a sense of agency that, I think was very cathartic. Whereas the past two years were just spent, like, staring at the TV, aghast and feeling so helpless, so yeah, it's a lot better to be creative during this time.

Musically, it is a real departure from your previous records. What were the conversations that you had with the producer Annie Clarke aka St. Vincent, before heading into the studio?

We had such a good time with No Cities To Love, our last album, but we live in different places now. Carrie mostly lives in Los Angeles, and I'm here in Portland. And writing in the rehearsal space just wasn't really as much of an option. So, a solution was, ‘Well, what if we try writing with trading files?’ And we did demos here in Portland, but we actually enjoyed writing where we would, you know, dive into a whole song via Dropbox. We didn't know how that was going to work. But it actually was really cool and interesting.

It required almost a larger licence as an artist to really convey an entire song, a whole scene, instead of just coming up with a riff on guitar, this was like, 'Well, I'm actually going to try and create a whole mood'. And we've never really done that before. We were like, ‘well, let's, let's try adding some different sounds as well’. We use some synthesiser, on previous albums, but we really kind of dove into all the different tools that you have in like garage band or logic or what have you. And just tried it doing that and and found that that there were a lot more tools available as a writer. Instead of having this kind of writer's block was like, ‘I can't figure out any cool guitar part’. It's like, ‘well, what if I come up with a vocal line that's really based on a very simple chord progression’. That just that kind of freed me up as a writer, I felt.

The album seems similar to a collection of short stories. Is this because you were writing it some distance apart from each other?

Yeah. I think that it was meant to be almost like little vignettes. I think that we enjoyed that idea and wanted to kind of dive in and, and make it really character based, and not to hold back on the characters.

We were influenced by other writers, but also by performers in the LA area, like, we went to this weirdo night performance while we were writing and it really inspired me and Carrie. It lit a fire in terms of how deep and broad to go with a character in a song. You know, I think that the punk rock community, it's supposed to be based in truth telling. And I love that aspect of it. But after making nine records that way, it's really refreshing to be like, ‘Oh, actually, no, each song can have its own story and can be based  on a different character’, like that is really super expansive as a writer in terms of what you're able to do with that, there's different voices you might be able to come up with that way.

I read that you had some conversations with Jeff Tweedy of Wilco, about producing the album but chose St Vincent instead. What lead to that decision?

I think she is incredibly intuitive and really fast. And that she was just wanting to experiment as much as we did in the studio in a way that I think was really exciting. And she just had a tonne of ideas for us, and wanted to hear what we had to say. And Annie is also a person that's like, 'well, that's really cool but I think we can beat that.' She worked really, really hard on the album, to make it as good as possible. She's very collaborative to work with and really open to ideas.  I just think it went really well. And Tweedy, you know, we love him, and maybe we'll work with him some time.

How has ageism, especially against women, in the music industry affected the band? 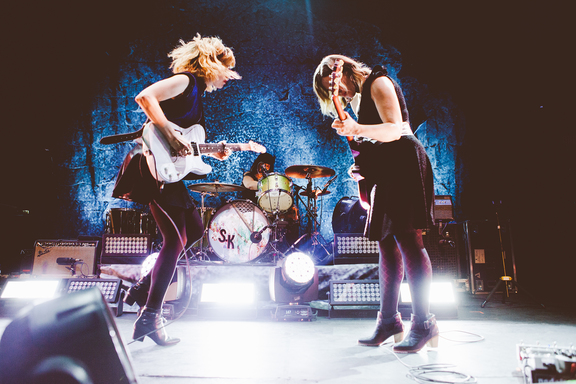 Yeah, I think that that's a lot tougher for women, in terms of the ageism thing. And I think that for us, it's just like, not letting other people shame you in terms of like,' yeah, here we are, we're making music, this is what we're good at, or great at, and we're going to keep going and doing it'. I don't feel that men have the same kinds of worries about that, you know, and women really shouldn't, we shouldn't be so judged on how we look, I think that's such a shame. And it's such a waste of our talents and our resources, which go on and on, as long as you are healthy.that's To me what I want to focus on, just making good music.

How do you avoid burn-out with such a busy touring schedule?

Part of it is just acknowledging how hard it is on yourself and your body and your psyche and being really conscious of taking really expert care of yourself, you know, as much as you can. It's very hard to physically and mentally stay healthy. So just try and make that a priority and get as much sleep as you can.