Johnny Cash: The man, the music and his gift for storytelling

A new documentary playing at the NZ Film Festival called The Gift: The Journey of Johnny Cash is a sensitive and compelling portrait of the man and the artist. As film-maker Thom Zimny tells Kirsten Johnstone, it was a completely different documentary until a remarkable discovery in the archives. 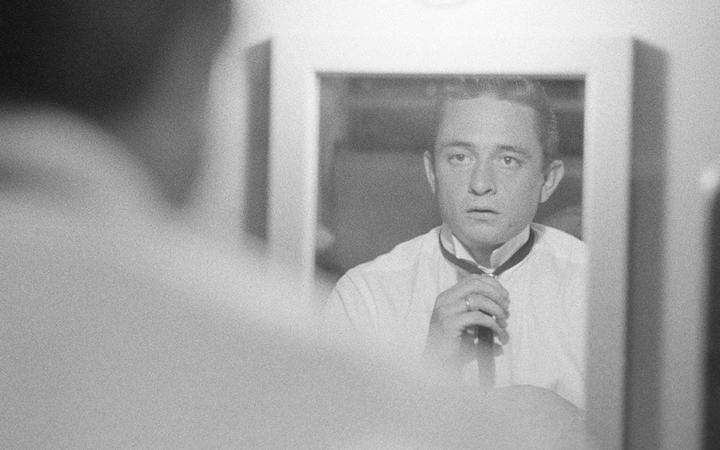 Zimny was half-way through editing his film about Johnny Cash, but something was missing.

A few days later they were interviewing author Patrick Carr (who helped Johnny write his 1997 autobiography), when he casually mentioned that he listened to the sound of Johnny's voice occasionally. It turned out he had hours and hours of Johnny Cash on cassette tape, recounting his life story. Some of the tapes are Johnny calling Patrick Carr while he was on tour, with rambling, sometimes poignant tales from the road.

“At that moment, I knew I had a different film on my hands" says Zimny. "I had the sound of Johnny's voice talking about the disappointment of his father, the poverty that he experienced as a child, the musical influences... and the movie changed.”

Johnny was a natural born storyteller, and his bass voice is rich and rhythmic, the pauses come in just the right places for dramatic effect.

The film is named The Gift: The Journey of Johnny Cash after a quote from Johnny's mother who said to him once, after hearing him sing: “God has his hand on you, don't ever forget the gift.”

Johnny's singing gives him both the gifts of stardom and temptation.

“When I first heard the sound of Johnny Cash recounting the story of his mom describing his voice as the gift, the rhythm that came across in the edit room was so powerful that it gave me chills to hear him tell that story.

“And the way he landed on the phrase ‘the gift’, I knew at that point, there was no other title for the movie. It made total sense because this gift that Johnny was given was both a blessing and a curse, Johnny's singing gives him both the gifts of stardom and temptation. And he'll forever be in battle with the opportunity that the gift brings.

“But he keeps circling back to this place of acknowledging the gift as a form of grace from a higher power, God. So in many ways, the title summed up everything that I was hoping the movie would express.” 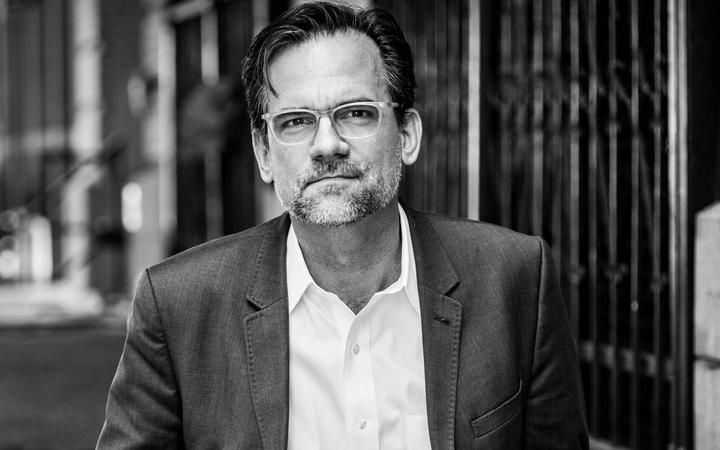 There are no talking heads in this documentary, instead Zimny uses just music and voices (musicians Emmylou Harris and Bruce Springsteen amongst them, as well as two of Johnny’s children Rosanne Cash and John Carter Cash.) They’re illustrated with archival film, carefully selected photos and Zimney’s own evocative flourishes: a train rumbling down the tracks, a lake, the back of the tour bus, a cabin in the woods. Zimney went to the places that Johnny had been, to try to see the world as Johnny might have seen it.

The biggest challenge was trying to figure out ways to knock down the iconic memories that we all have.

“Making this film, I decided that I was going to really expose and reveal a deeper sense of his musical history, and catalogue, but also some of the darker moments. And I really wanted to explore the contact he had with the spiritual side, and the conflicts he had with addiction, And how it affects any artist's musical journey, without getting into space of being salacious.” 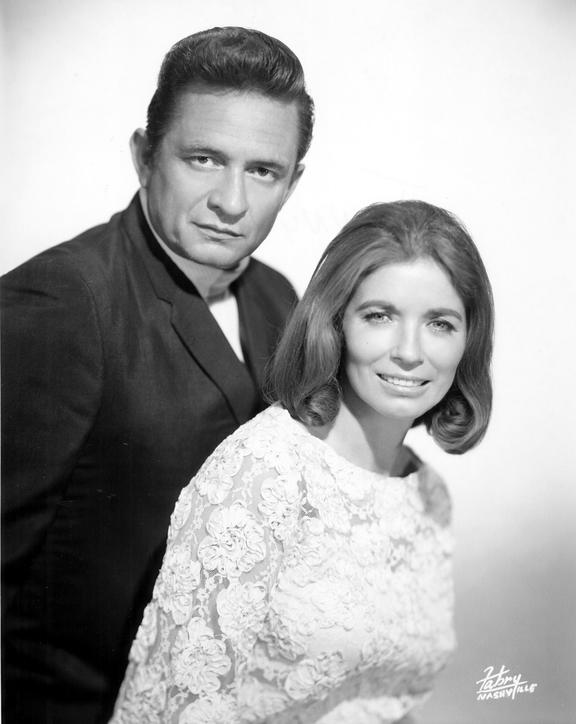 There have been documentaries about Johnny Cash before of course, as well as the 2005 biopic I Walk The Line, but Zimney felt that each of these films focussed on a particular aspect of his life, without really capturing the essence of the man.

"The biggest challenge was trying to figure out ways to knock down the iconic memories that we all have."

He tried to find photos that hadn’t been used before, and there are some telling images in there. We see photos of Johnny with his family, his four daughters and his first wife Vivian Liberto. She isn’t smiling in any of them, and Johnny tells us “There was always a battle going on in my house.” Rosanne describes the relentless rigmarole of touring life, and the effect it had on her mother, who stayed at home. We see Johnny’s face grow gaunt as his addiction to amphetamines, barbiturates and alcohol takes its toll. We see the smiling face of June Carter appearing on the scene, and Johnny’s face lighting up.

John Carter Cash and Rosanne Cash (both musicians themselves) provide candid interviews that shed new light on the love and connection he had with his children.

“The honesty that they brought to the film revealed a sense of the demons that he faced throughout his life. It wasn't a Hollywood story, that he met June and things were great and then they just carried on. The light and the dark was a continuous theme.”

Throughout the film, Zimney takes us back to the 1968 Folsom Prison live recording.

“I was always obsessed with Folsom because it was the idea of Johnny walking right to the edge, looking at the crowd and seeing himself. Seeing the possibilities of some of the darkness in that audience that he himself could commit. 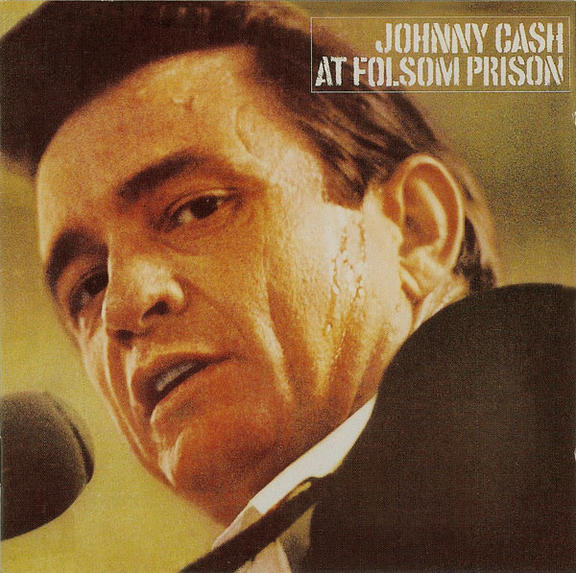 “But more importantly, trying to be in this place of staring at other people and seeing them differently. Other people who have not survived, sometimes, the tragedies of the addictions that he went through, or crime or being incarcerated. His emotional prison was always there. So for him to go to an actual prison and stare into their eyes, and try to find a connection in the world to bring him past his own addictions - It was Johnny going right to the edge.

"Those moments in someone's life are very interesting because they are in the boxing ring with all their demons, their fears."

It’s also Zimny’s way of breaking up the  linear passage of the documentary so that it isn’t just a cradle to grave account of Johnny’s life.

“It reminds you that this giant moment was symbolic of their whole life. And with Johnny Cash and Folsom Prison, he was bringing out all the songs of his past, gospel, rhythm and blues, country and rock. In some ways, Folsom represented Johnny both spiritually and musically in the deepest way.”

Some of the most compelling footage comes toward the end of his life, when his career was revived by producer Rick Rubin, from the late 90s until Johnny’s death in 2003, just a few months after his beloved June Carter passed away. We see the intimacy of those first recording sessions in Rubin’s living room, and then the joy on Johnny’s face as he begins touring again, surrounded by musicians he admired. And we see Johnny and June in old age, being affectionate by the seaside as he tells us what she meant to him.

“I didn't want to just tag on the idea that with Rick Rubin he became a famous star again, there was a much bigger idea there, which was, he had this journey with this woman and he survived the light and the dark to the very end with her.

“And her love for him was demonstrated in their commitment to the music and the work. So when she's gone, the last thing she throws to him is the idea of ‘carry on and work.’

“So work became this theme in the film where work will bring you this peace and this calm in the spiritual connection to music, but also defines who you are on the planet.

“And to the very end, he was going to crawl to the mic and sing those songs with Rick Rubin and give the last bit of his energy to the songs. And that was something I grasped when I heard his voice.

“And when I listened to his voice singing, especially at the end of his life, there was a power and a beauty in the ageing voice from the young Johnny Cash to the old.”

Thom Zimny has made films about Bruce Springsteen and Elvis Presley as well as Johnny Cash. He will present a masterclass in Auckland  for filmmakers Thursday 1 August 2.00pm to 5.30pm at AUT City Campus

Screenings of The Gift: The Journey of Johnny Cash