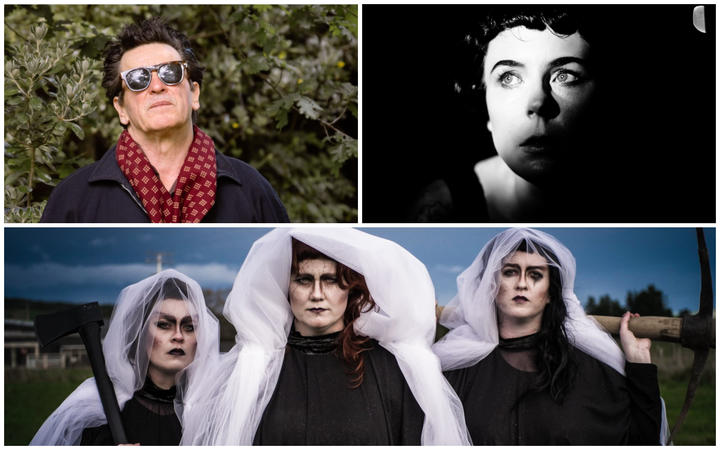 Motte – aka Anita Clark – produces cinematic soundscapes with beautifully haunting vocals and lush, looped violin textures. Artwork from Will Agnew (Spectre Collective) will be projected onto the planetarium’s dome throughout the show.

Paperghost – aka Zach Webber – is an electronic producer who builds immense, disorienting, sound collages for audiences to loose themselves in.

She Shreds with Hex, Mr Sterile Assembly and more

As part of Wellington Museum’s After Hours series, She Shreds offers a line-up of Wellington’s best bands featuring female-identifying musicians.

HEX is rock trio Kiki and GG Van Newtown, and Jason Erskine. They deliver a discordant, electric experience that they describe as "witch-rock".

mr sterile Assembly is a combination of punk, noise, math rock, and something called “free-form squall”. RNZ Music’s Nick Bollinger says, “Catch them if you can. There’s nothing else like it.”

Oonaverse is guitarist Bek Coogan. Described as “NZ’s first lady of rock’ n’ roll, yodelling and counter culture.” Coogan was the only member of the Wellington International Ukulele Orchestra to ever jump offstage and crowd surf at a gig (much to the surprise of the seated audience).

Womb is twins Charlotte and Haz Forrester and their sister Georgette Brown. They create “oceans of sound” from alt-folk soundscapes to dream-pop.

Country legend Barry Saunders will be joined by veteran drummer Caroline Easther for an intimate show, including an appearance from the Kelburn Viaduct Municipal Ensemble Jug Band.