Viral pop songstress Theia is about to release her new EP Not Your Princess, she speaks to Yadana Saw about growing into her music career.

The last time Music 101 spoke to Theia was before her song ‘Roam’ went ‘gangbusters on Spotify’. It was the first time she’d ever been properly interviewed, and before she'd performed her music live, or even figured out if her dream to become a popstar was what she actually wanted. 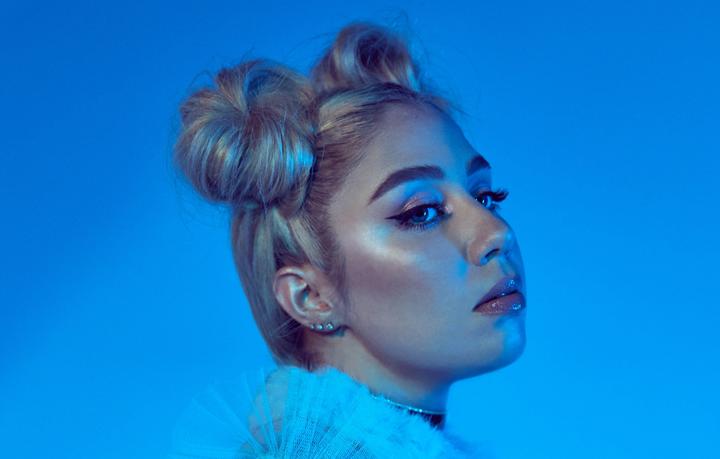 Theia reflects on that young woman - “It feels so weird. It like feels ages ago and at the same time it feels really recent.”

Three year ago “I had no idea in any way, I  just trying to figure out whether I even enjoyed it [making music].”

For Theia, kicking a career off in the music business was “was like signing up for a course and you have no idea what’s involved and you’re expected to write a PhD thesis on it,” she muses.

Today, Theia is on the cusp of releasing her second EP Not Your Princess In between her two releases, she’s found her voice, her style, and her purpose in the music business.

“I totally love the idea of songwriting being a dark art. Because I feel like that it is something so sacred. I feel it is a craft, you know, something that you really, really do work hard to refine and get good at.”

She spends a lot of her time in Sydney, writing and making her own music as well as writing for other artists. Through this experience Theia learned what works for her.

“For my own project it’s just myself and a producer in the studio - I love that. I just love to be in a really intimate, kinda safe space.”

In the post-Lorde deluge where many young female singer with a hint of pop talent were touted as the next thing, Theia was one of a handful young starlets presented as precisely this.

Articles about mused on whether Theia was the next pop princess. Others wondered whether she'd get to organically develop her musical identity after her song Roam, from her debut EP, quickly ratcheted up 8 million listens on Spotify.

For Theia, the whole experience was rather more perplexing

“I was like ‘frick'. I didn’t even know what blowing up would even equate to.”

Em-Haley Walker had just finished a degree in te reo Māori and indigenous studies. She’d just started a job as Māori language teacher at a primary school, while pursuing music on the side because “it was time.”

What she hadn’t counted on was “everything happening so quickly” and that the radio airplay and streaming success would mean having to front for interviews, or to perform her music live.

“I kinda hadn’t really done that at all - and you’re expected to be really good when you first start off but I hadn’t even done it. I was like ‘crap!’ I’ve just released a song.

She’s grown to love performing her work, though she half-jokingly admits that she wishes she “was like Kate Bush - just releasing music and never performed unless I wanted to.”

It’s hard to imagine Theia not liking performing as she presents as a complete larger-than-life, pop cartoon figure - imagine an amalgam of Lady Gaga, a Powerpuff Girl and some K-Pop confection. She’s written songs that address self-harm ('Bad Idea') and she released her latest single ‘Not Your Princess’ on International Women’s Day.

But it’s songwriting that she’d really passionate about.

“I love words and do use a lot of innuendo and metaphors...you have to know how to use your lyrics and figure how you can compliment the melody with your lyrics, because it’s all in the flow.”

“Even [Lady] Gaga says if a song can be stripped back and played on a piano or guitar it’s a dope song. It’s got longevity and you can see the workmanship.”

“I am really obsessed with lyrics and toplines” which are “combination of melody and lyrics.”

Theia explains that MoZella, who penned Miley Cyrus’ hit 'Wrecking Ball', alongside Dolly Parton and Stevie Nicks are some of the topline writers she looks up to. “Their specialty is everything that is in the song that is not production.”

The waiata is “a Tainui classic,” she says while recalling a particular performance during a kura reo (intensive language school) with “Scotty Morrison and the language gods of New Zealand for the Māori kids”.

After three days of  “hard out” study”, on the final day “everyone would literally gather around the campfire and sing songs.”

Theia relished the moment everyone sang her grand-kui’s waiata.

“I just  couldn’t believe it! Because that’s the song my kui, my grandmother, had taught me about and told me that her mother had wrote it and that’s then that I realised ‘wow’ it actually goes beyond my wh`nau and to the rest of the iwi in New Zealand - which was incredible!

"It was really nice to know that my grand kui wrote that song which has brought so much joy to others."