Back in 2013, the Irish singer-songwriter Hozier exploded into people’s headphones with his gospel-pop anthem 'Take Me To Church'.

Ahead of his New Zealand concert and upon the release of his new album Wasteland, Baby, he humours Yadana Saw with haircare advice and talks about how he sees himself as an "organiser of sounds".

I have a precious 20 minutes to speak with Hozier, the Irish singer-songwriter whose breakthrough single has been streamed over 2 billion times on Spotify alone.

The first thing I do is seek his wisdom on how to tame hair of middling length, the style he's currently sporting.

His response is pragmatic and straightforward.

After cutting his own hair to “shorter than shoulder length”, he now just crams it under a beanie: “I find it makes it a little bit easier.”

When we get to the serious topics, like the pressure to write a song to follow up 'Take Me To Church', Hozier succinctly gets to the point: “I just wanted to write something that felt honest and came from a similar place.

“As a musician, all I do is organise sound,” he says matter-of-factly, adding, “Hopefully it conveys meaning for somebody.”

Andrew Hozier-Byrne is the son of a blues musician and a painter who hails from County Wicklow. He credits his father for his love of blues music and his mother’s artistic skills – she created both his album covers.

His brother made the music video for his 2019 song 'Nina Cried Power'.

Hozier has had a whirlwind few years: as a youth chorister, then a university student, and now one of Ireland’s most successful musical exports.

It’s an adjustment that the 29-year-old is finally making sense of now that he’s released his long-awaited second album.

Of the relentless touring, dizzying fame and demands of music industry promotion, he says: "You experience a lot of it retrospectively because at the time when things are busy and crazy you’re all-consumed and you’re not analysing it at that time.”

Hozier gives the sense he’s fairly ambivalent about the superficial aspects of his chosen career, but he’s managed to focus on what he considers the special parts of what he's doing.

“There are certain moments where hearing an audience sing back your lyrics to you is a really unique and special feeling ... Moments like that, that really stay with you.”

The recording of his new album Wasteland, Baby gave Hozier the opportunity to work with his lifetime musical heroes Mavis Staples and Booker T Jones of Stax Records.

The output of the Memphis, Tennessee soul label and home of these two artists made a lasting impact on a teenaged Hozier: “It flicked a light on in my head, a light that doesn’t go out.

“The first band I was ever in when I was 14 or 15, I was doing covers of Booker T and the MGs, and covers of Stax Records songs ... Being able to work with him and tell him that was such a pleasure and such an honour.” 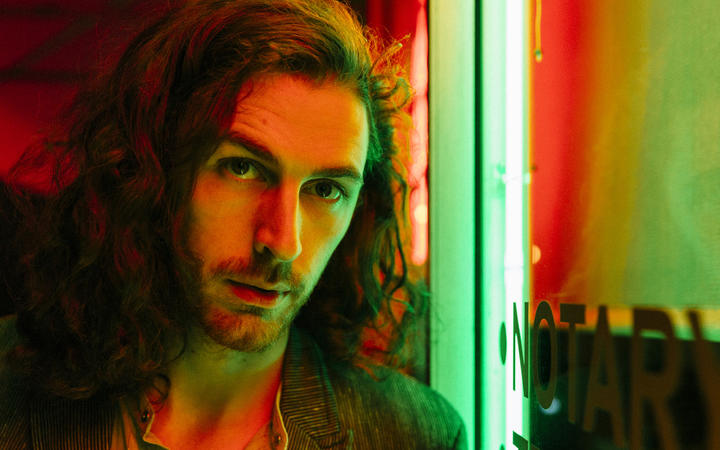 “The song looks to artists who sang about stuff they felt was important to sing about.

“The Staple Singers and the work they did around the Civil Rights Movement, or just writing stuff that was a witness to things going on at the time.

As to whether Hozier considers himself a witness and chronicler of events in his time, he says “no more than anyone else is".

"We all live in the same world. We’re all seeing the same shit happen.”

“It’s just about reflecting honesty and how you see the world and how it confronts your sense of values and morals and reconciling that.”

'Take Me To Church' took issue with Christianity’s attitude to same-sex relationships.

Hozier has actively supported the Irish campaign to abolish the Eighth Amendment and a recent nurses strike, referring to himself as a “signal booster” for the political movements of his generation.

Now, more importantly can I just say I hope everyone in Ireland shows support for nurses during their strike action. They're the best of us. It's not too much to ask that we might show support to those that support and comfort us in our entering and leaving of the world. X

First and foremost, however, many of Hozier’s musical ruminations begin as love songs.

Take the title track from the new album, Wasteland, Baby “which is kinda a love song for the end of the world”.

“Imagine the worst case scenario, imagine the end of the world, but also in this awful imagined scenario is you saying “I love too that the love soon might end”.

“Even though it reaches for the warm centre of all us, it kinda just summed up the record for me.”

Hozier is playing Auckland's Spark Arena on Sunday 28 April. RNZ Music has five double passes to the concert and special access to soundcheck before the show! Enter here.