This superb performance by Hollie Smith and Teeks is the first single from Offering, an album that brings together some of NZ’s top musicians to raise money for the Salvation Army.

Hollie Smith and Teeks have joined forces with the Auckland Gospel Choir, to re-imagine one of New Zealand’s most beloved hymns ‘Whakaaria Mai (How Great Thou Art)'.

The track is the first single from Offering, a collection of 12 gospel hymns performed by some of New Zealand’s top musicians including Dave Dobbyn, Tami Neilson and Don McGlashan, Stan Walker and Kimbra.

The album is out April 26th and all proceeds will go to the Salvation Army to assist those in need.

In addition to the re-imagined hymns, 12 of New Zealand’s finest painters have created an original artwork inspired by each one of the tracks. Artists include Dick Frizzell, Lisa Reihana and Max Gimblett, among others.

All the musicians and artists involved in the Offering project have given their time and talents at no charge, including foregoing any future royalties.

The artwork for ‘Whakaaria Mai’ was created by Auckland artist Reuben Paterson (Ngati Rangitihi, Ngāi Tūhoe, Tūhourangi), known for his creations in glitter and diamond dust. 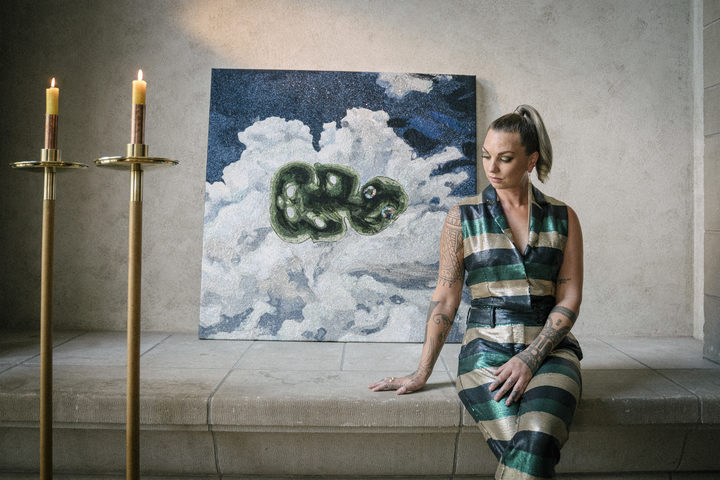 Hollie with the artwork by Reuben Paterson Photo: Supplied

Teeks (Ngāpuhi, Ngāi Te Rangi and Ngāti Ranginui) says supporting the Salvation Army was the driving force behind his involvement in the project: “I kind of like thinking about how many people we can help by doing this.”

“Every time ‘Whakaaria Mai’ is sung it’s always quite a heavy kaupapa or occasion and so it’s always going to be in your heart.”

Hollie hopes people feel happy and uplifted when they hear the new version of the song: “I just want them to get that cool feeling when you feel all bright inside your bones.”

Offering will be released on April 26th via CD and digital with all proceeds going to the Salvation Army.