Fyre Festival was supposed to be “the most insane music festival the world had ever seen”. It was sold as a luxury experience on a private island in the Bahamas, but the reality was a squalid collection of soggy tents on an abandoned building site.

Now two documentaries have been released about the saga (or ‘dumpster fire’ as the Internet called it at the time). Samuel Flynn Scott of the Phoenix Foundation reviews both.

Watching Fyre Festival fall apart was good internet. Just as the promised luxury festival was built out of expensive posts by the world’s biggest online-influencers it was similarly torn down live on social media, this time not by supermodels and rap stars but by angry concert goers and the quickest meme creators this side of 4chan.

Fyre was put on by American entrepreneur Billy McFarland and rapper Ja Rule and was promoted by models/Instagram superstars Kendall Jenner and Bella Hadid among others. Ticket prices ranged from $500 to $12,000 USD.

Luxury accommodation, the best food and booze, world-class musical acts, all failed to materialise. The punters were instead provided with soaked mattresses in crisis relief tents, crummy cheese sandwiches, cancelled bands and chaos.

They quickly devolved, Lord of the Flies-style, into territorial psychopaths. According to one partygoer he and his friends didn’t want anyone staying near them, so decided to rip and urinate on the neighbouring tents. Cool way to deal with a crisis dude. 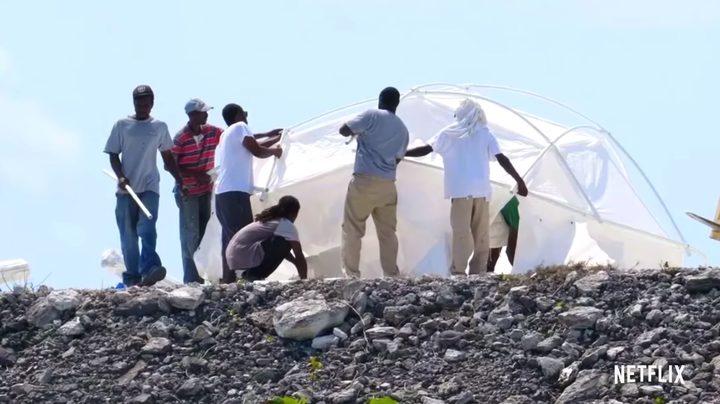 Workers erecting the 'luxury' tents at Fyre Festival (which turned out to be leftover hurricane tents) Photo: Screen capture

Oh how we laughed as we watched its demise, new revelations continuously popping up in our feeds: “They deserve it, they’re rich!”

I wasn’t immune to the schadenfreude.

But schadenfreude is a shitty drug that wears off fast.

After watching the two documentaries and reading dozens of articles, it’s morphed into pity and a sort of postmodern grief: nothing says “humanity is truly doomed” like rich idiots throwing their money down the toilet-of-dreams in a quest to spot a Kardashian on the beach while watching Blink 182. 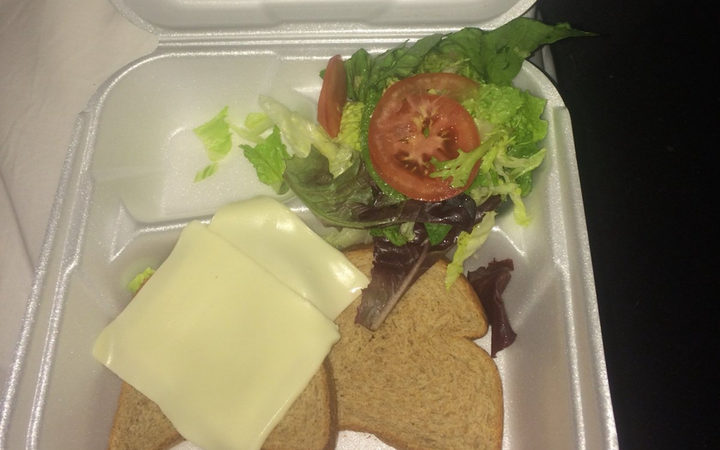 The two documentaries on Fyre Fest are Netflix’s Fyre: The Greatest Party That Never Happened and Hulu’s Fyre Fraud [not available in NZ].

Both on-demand services have been accused of using questionable ethics in making their documentaries: Netflix produced theirs in conjunction with Jerry Media, the company behind Fyre’s insanely effective marketing campaign, and Hulu paid Fyre Fest co-founder, compulsive liar and likeable asshole, Billy McFarland, to talk.

Jerry Media had all the good footage which is, I assume, how they got to co-produce (with Vice) a doco that people are saying paints them in a good light. I actually didn’t think they came out of it looking all that good.

They orchestrated a social media campaign that was selling a lie.

The thing that’s most depressing about the whole affair isn’t really spelt out in either film. It’s the misogynistic premise that lies at the very heart of the festival’s concept.

All it would’ve taken was half an hour with an Excel spreadsheet and Google to work out that Fyre was never going to happen the way it was promised. None of the key Fyre people had put on any kind of festival before, let alone a five-star luxury boutique festival in the Bahamas.

Let’s just absorb that for a moment. Memes. Memes used to have a kind of innocence, an untouchable secret code of the young and irreverent. But let’s face it millennials, you’re getting older and you gotta make a buck. Fuck Jerry used their cruisy-dude, stick-it-to-the-man approach to subtly promote huge brands. 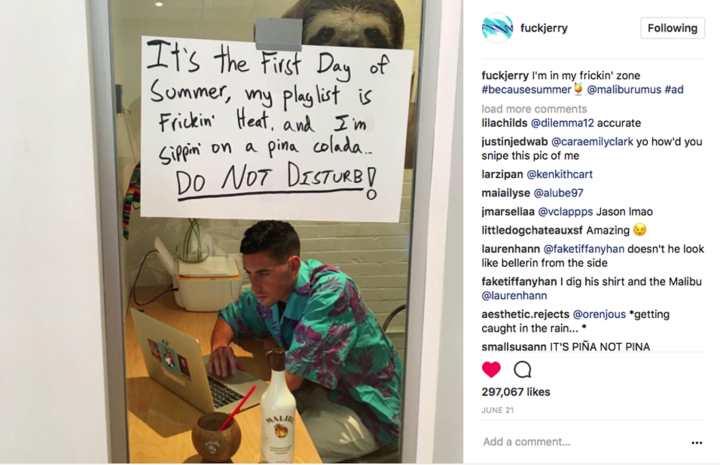 That aside, it’s a captivating film. Almost no one comes out of it looking good, except the Bahama locals. And perhaps McFarland’s right-hand man who, at McFarland’s request agrees to give a blow job to a customs agent in order to expedite the processing of the festival’s Evian water. Spoiler alert, he doesn’t have to, because that’s not how life works.

McFarland, Ja Rule and a lot of the people around them live in this kind of Entourage fantasyland where they don’t just feel entitled to an insane level of luxury, they also think it’s somehow charming to be an asshole.

The right mix of charm, fast-talking and toxic obnoxious nonsense have allowed McFarland to pull off scam after scam. He’s so confident he doesn’t even seem to realise he’s scamming.

That’s where the Hulu doco (not available in NZ, but there are crappy uploads on Youtube of course because piracy is fine as long as you do it through companies owned by Google) has the trump card: the actual interview with McFarland. 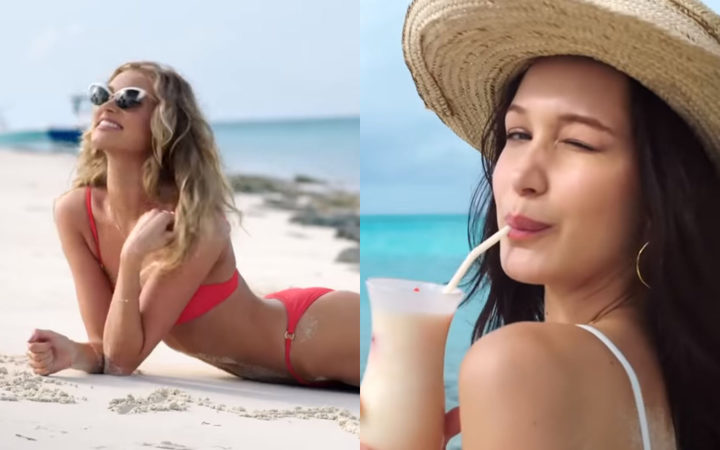 Overall though, I think Hulu's doco is less interesting. It spends a lot of time explaining what a millennial is. It doesn’t have all that behind-the-scenes gold that Netflix had access to and it’s just generally not as polished or as well cut together.

Fyre Fraud takes the angle that the festival was always a complete scam and everyone is complicit. Oren Aks, a former employee of Fyre who worked on the infamous social media campaign, paints Jerry Media as a very cynical company that could see the wheels falling off early enough to have avoided involvement.

It also seems to blame the world for being so shallow that McFarland and his scams – always revolving around false claims of VIP access to experiences, were inevitable.

McFarland himself comes across as someone with no remorse trying very hard to seem sincere. There is a point where the interviewer asks if he’s a compulsive liar. You can see the look on his face as he realises there is no redemption for him: the interview will not save his public image.

It’s actually a very sad thing to watch. But this isn’t someone realising they have done wrong and need to change and grow, this is purely the realisation that the scam is over and there is no going back. 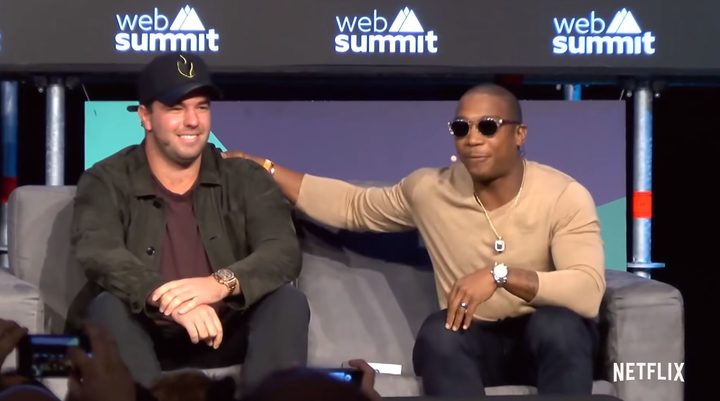 The thing that’s most depressing about the whole affair isn’t really spelt out in either film.

It’s the misogynistic premise that lies at the very heart of the festival’s concept. The men who created Fyre, the men who promoted it, a lot of the people spending their savings to attend it, they just want to have sex with supermodels.

The influencers and supermodels get painted in a bad light in both films, but if you think about it they were hired to do a job and they did it well, despite the circumstances.

In one scene, Ja Rule asks the models to jump in the ocean in the middle of the night, and it feels really gross. The tone is so possessive and unprofessional you can feel the lines between the film shoot and the life these guys think they’re living, start to blur.

The people who who didn’t do their jobs were Ja Rule and Billy McFarland. If you take the paid supermodels out of the equation they’re just a couple of drunk dudes chugging terrible beer on jet-skis who equate being rich with being interesting. And that’s just sad.

Fyre: The Greatest Party That Never Happened is available on Netflix now.