Orchestra of Spheres on their new album Mirror

With their colourful costumes and trance inducing sounds, Orchestra Of Spheres have built a loyal audience both here and overseas. They show us around their Wellington base The Pyramid Club.

We’re standing in the room where Orchestra of Spheres recorded their last album Brothers and Sisters of the Black Lagoon. It was meant to be their semi-permanent rehearsal and recording space.

But head honcho and original 'Sphere' Dan Beban a.k.a. Baba Rossa has a problem which drummer Riki Gooch a.k.a. Woild Boin is trying to take stock of...

Dan quickly interrupts, “I think at one time I had 28 guitars”. His collection includes not only his workhorse instrument - the homemade 'biscuit tin guitar' - but a sitar, an electric saz, a mandolin and a Chinese ruan that a mate found in a Beijing flea market.

The collection is why the band now practice and record in another part of the Pyramid Club, the artist-run DIY collective that Dan coordinates.

When I ask Dan if he has a problem, it’s Riki who shoots back, “Yeah, but it’s not guitar related,” to which both of them start laughing as they frequently do during our time together.

By their own admission, the group is “creating” their “own little world”. Their onstage garb is as fantastical and out-there as their music: they often perform in robes, elaborate headdresses, and eyepieces which they make themselves. Erika, the main brains behind the outfits, says the unofficial uniform code is to “have their eyes covered.” 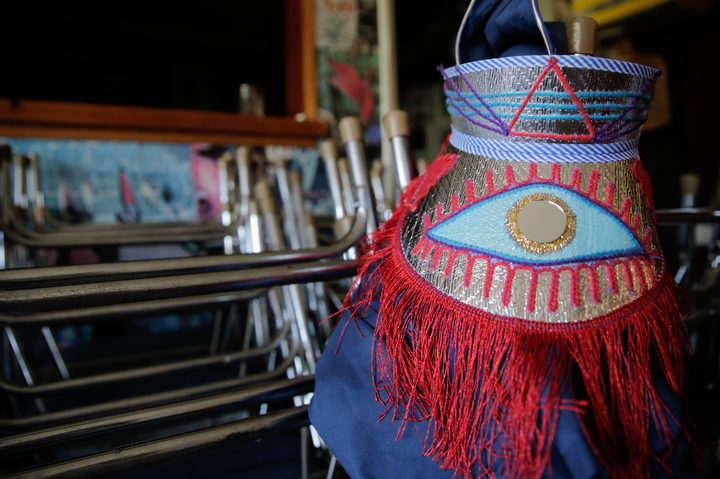 Like their music, Orchestra of Spheres costumes take influence from everywhere: they’re spacey, religious, and borrow motifs from around the globe and all over history.

Dan’s even worn a birdcage on his head.

He reckons the outfits help him assume an onstage persona consistent with music he’s playing. He points to the polar fleece bush shirt he’s wearing today - it wouldn’t really be on theme.

The Pyramid Club is spacious enough to house all the Spheres' artefacts and costumes. The artist-run space exists on the mezzanine floor of a nondescript former canning factory whose other tenants include a bakery, a no-frills gym, car mechanics and an antique shop.

The Pyramid Club itself is a labyrinth of studio and rehearsal spaces that the band share with other artists across creative fields.

Dan says this mix of artists makes it possible “for experimental music and stuff that would never otherwise have a chance to perform in a regular commercial venue” to have a home.

The Pyramid Club has been running for five years although Dan explains its history goes back further, tracing its lineage through a number of earlier DIY-artist run operations: Fred’s, The Garage, Happy, The Space, right back to “Plan 9 and the Braille Collective".

“Wellington’s had this really strong community of musicians who have basically been making it happen themselves for a long, long time.”

This lineage played an important part in the formation of Orchestra of Spheres: it’s how Dan and his biscuit tin guitar first encountered the “total primal, non-coordination” rhythms of the group's original drummer Jeremy Coubrough.

Jeremy’s background was in dance and electronic music, “he had all these incredible rhythmical ideas and he was just figuring out how to do them. He could only play one beat,” says Dan, whose own instrument could only do “little drony notes.”

“The music kinda evolved around the people and their inability to do heaps.”

When adding a bass to their line-up, it was a home-made bass carillion - essentially foot pedals from an organ attached to a keyboard set-up that could only play one octave. For Dan and his collaborators, the limitations were their strength.

“If you put some really tight restrictions on a creative project suddenly the world opens up, then you can start to see some really cool kinda pathways you can [use to] navigate through these strange things we’ve set up here.”

The band soon included Nell aka Mos Locoss on gamelan and theremin, and drummer Riki Gooch took over from Jeremy.

For Riki, who's been associated with acts such as Trinity Roots, Fat Freddy’s Drop, Ladi6 and Dave Dobbyn, and has made music under many of his own aliases (Eru Dangerspiel, Cave Circles). Orchestra of Spheres has been one of the more enduring projects in his music career.

It’s his favourite he confesses, though he quickly adds, “No disrespect to other projects I’ve done. I love the other bands and projects, but this is my favourite by far. It’s the people. The real focus is on music, that’s the real refreshing thing.”

The complete freedom to follow the music and not have to conform to a genre, sound or fashion is what appeals to Riki the most.

“I’ve been in things where it's about the business, music becomes a commodity and you’re talking in units. Whereas this is the complete opposite. It’s so cool to be able to bring ideas to the band and play with the music.”

For Riki and Dan this is reflected in the way their latest album came together. Mirror is a double LP that took a few days to record. The songs are as long as they need to be (many of the tracks hit around the 8-10 minute mark), and they invited many guest players in.

Orchestra of Sphere's double-LP Mirror is out now on Fire Records.