Godfrey De Grut may be the only APRA Silver Scroll winner to have been personally schooled by Kanye West never to play an F-chord again.

"It was really scary and nerve-wracking. I was sweating the whole time" he tells Yadana Saw. 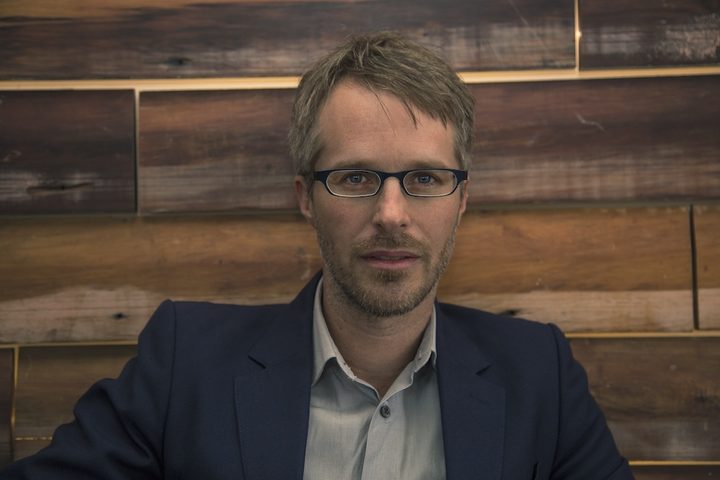 The year was 2006 and Kanye West was touring New Zealand with U2 and at the same time producing rapper Common's Finding Forever album.

Kanye wanted to record some tracks while he was here and needed a keyboard player - Godfrey was the ring-in local.

"He knew what he didn't want. Sometimes I played something and he'd like it. But he definitely was able to say no."

Godfrey arrived at the studio at the appointed start time of 10am, but it was 2pm in the afternoon that West arrived.

When he did arrive "he worked really, really hard," recalls Godfrey.

Impressed by West's "efficient" work ethic and the manner in which he would skip through CDs, sample beats, put them through his MPC drum machine and then rap over them, Godfrey was behind his keyboard awaiting instructions.

The intense recording session eventually finished at midnight when West's bodyguards hauled the exhausted rapper-producer out of the studio.

"He literally just passed out. During that whole day, he had a glass of water and a couple of grapes. He was really super-focused. I was like 'wow, this is what it takes.'"

“The mid-90s were heavily influenced by Nathan Haines and that gave us a peek into what was possible."

A burgeoning jazz beats scene took root in Auckland’ High Street precinct where Godfrey, as part of The New Loungehead, worked with “a lot of those musicians who were on [the 1994 Nathan Haines album] Shift Left and Nathan and his band Freebase."

Godfrey’s admiration for Nathan Haines began at intermediate when he saw the jazz saxophonist with his brother Joel, a guitarist.

“I ended up playing a lot of saxophone, trying to get as good as what I saw Nathan play.”

He recalls hearing the track 'Last Night' for the first time:

“I was just transported to another world. I just could not imagine how somebody else could make something as cool as this.

"Nathan is so restrained as a performer on this track and he lets the arrangement to do the heavy lifting. So he’s not having to jump out the front with the saxophone and do some high, fast notes. Everything just sits in its place so well."

"I did play this video to my youngest daughter and she became quite fascinated with it."

"It ludicrous she’s an unbelievable performer/entertainer. Such a well-crafted song, so exciting and dynamic it’s cross-pollinates so many genres of RnB, jazz and rock.

"When I first heard and saw it I was just stunned that somebody could put all these, piece this jigsaw puzzle together. She has so much conviction when she performs, it’s really mind-blowing how some people can get to that level of artistry."

"I was hooked from the first time I heard “Ricky Don’t Lose That Number” on a Steely Dan Greatest Hits LP that his father had suggested to his 13-year-old son."

Godfrey recalls that Donald Fagen’s first solo album The Night Fly was the only tape his father had in his car.

“Literally for two years all that ever got played in my car was RNZ and this tape. It got to the point where I knew exactly where the space between songs was. I’d just anticipate where the downbeat of the next song would occur.

“I love that idea that people get so determined to make something perfect. Everything has been sanded and rounded off and there’s no rough parts in Steely Dan."

The first time Godfrey heard the “mega” album that is Def Leppard’s Hysteria? “I think I went home and ripped my jeans up.”

“I kinda forgot about them for many years until Dave Gibson and Justyn Pilbrow were researching production for doing their Elemeno P albums. They heavily got into Mutt Lange, the famous producer.

“It’s pretty crazy, his catalogue. He can go from ACDC to Billy Ocean. He’s just a consummate writer and producer.”

Godfrey marvels at Lange’s ability to make things “sound so good, consistently”, citing his other credits which include the production of Shania Twain’s hit records and co-writing Bryan Adam’s 'Everything I Do..'.

But for the composer and musician who's been described as “Glenfield’s answer to Jarvis Cocker”, 'Hysteria' will always have a special place.

Huey Lewis and The News: 'Power of Love'

"I became obsessed with Back to the Future. I had a little notebook and I’d draw DeLoreans incessantly, page after page.

"I think at that time I wasn’t aware of the music 'Power of Love' (the hit single from the Back to The Future soundtrack), but over time Huey Lewis and The News came back into my life."

During a particularly obsessive fitness kick, Godfrey rediscovered the track 'Power of Love'.

"I would cycle through three albums: In the morning I would start with Huey Lewis back to front, then go to the gym and listen to Daft Punk's Discovery and do another run with Bon Jovi’s Slippery When Wet.

"'Power of Love' is such a perfect song."

When Godfrey is informed that Joni Mitchell is the most requested artist by RNZ Music Mixtape selectors, he gives a persuasive guess as to why.

“She just kinda nails everything. It’s an almost perfect convergence of amazing lyricism and amazing melody and supporting harmonic structures.

“She sounds very authentic with what she says and how she phrases it. The lines of her melody don’t sound contrived at all.

"She’s such a fearless writer and performers, from her folk roots and in the '80s she moved through this jazz phase with Charles Mingus ... She did this crazy tour with a bunch of jazzos.

"I have this album on CD, tape LP, I have a DVD release, as well. It’s the most amazing live show. And her band is nuts, it’s all the greatest jazz artists of all time and the music is nuanced and vibrant and energised. It’s perfectly cohesive."