James Lavelle launched the careers of some hugely influential musicians on his record label Mo' Wax, and found further success with his own band Unkle. He's now the subject of a new documentary, which he discussed with Tony Stamp. 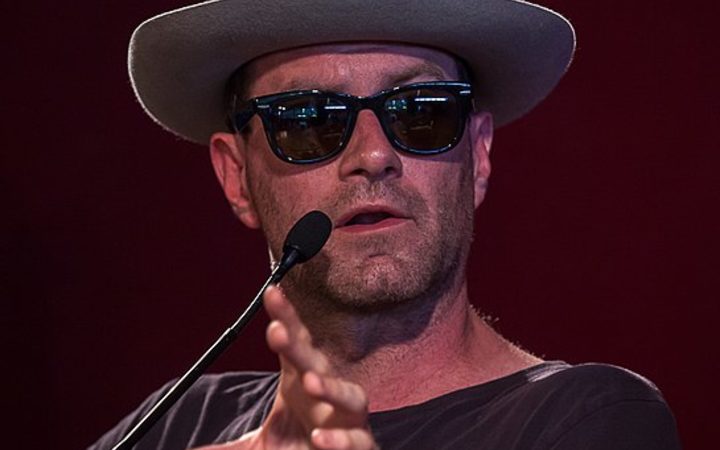 James Lavelle was just eighteen years old when he started his record label Mo' Wax, which went on to release some of the most influential acts of the nineties. Some were from Lavelle's home of London, like Attica Blues, but his ears reached as far as Japan, where he discovered DJ Krush, and America, which lead to albums from Blackalicious, Dr Octagon, and famously, the debut album from a young San Franciscan called Josh Davis - better known as DJ Shadow.

Shadow's album Endtroducing was a massive success, and set the stage for a collaboration between Shadow and Lavelle called Unkle. Their album Psyence Fiction featuring a jaw-dropping array of guests like The Beastie Boys' Mike D, Radiohead's Thom Yorke, Kool G Rap, The Verve's Richard Ashcroft, and more.

The Man From Mo' Wax is a new documentary chronicling Lavelle's career, from the highs of Psyence Fiction to later years when he lost his record label, ended creative partnerships, and struggled with drug use. It's an extremely warts n' all portrayal, so much so that it came as a surprise to find Lavelle himself promoting the film.

But as he was, I called him in his London home to get his side of the story, and as expected after seeing the documentary, James doesn’t hold back when talking about the past.

“I was young, I didn’t have the tools to navigate that. I had a child. Everything was so fast. In many ways, the brutality of how the record industry behaved had a very detrimental effect on me.”

He’s speaking about the post-Psyence Fiction Years, when a series of major label machinations led to the end of Mo’ Wax.

“You’re in this snowball, and you can’t get out. And that’s a mixture of choices you made, the economy of what you’re doing, and also being a DJ in a very hedonistic period of time. That sort of took over.

“Then you spend your thirties in this sort of grey area where you’re trying to keep up, but you’re sort of fucked as well.

“It was all too fast, and too quick, and you’ve been knocked down before you’ve even started, really.

“That’s the wonders of the British music press.”

He’s alluding partly to the reception Unkle’s debut received, which paired glowing critical appraisals with skepticism about his actual involvement in the album.

“I think collaboration in general back in the day was a dirty word. It’s strange to me that happened in that decade (the nineties), which was very forward-thinking musically.

“In England there was this mass guitar movement, with bands like Radiohead and Oasis, and that was ‘traditional’ music. And other acts like Unkle had more mystique.

“We all make our records in different ways. You know - Goldie, or Massive Attack, to name a few - they weren’t there pressing the buttons, or writing the guitar parts… I think I just got singled out because the label was so successful, and I was incredibly young.

“It’s a very English thing - build ‘em up, then knock ‘em down and destroy them.”

When speaking to Lavelle it’s clear he wants The Man From Mo’ Wax to serve as a line drawn under the first phase of his career.

In 2013 he co-wrote and produced the title track on Queens Of The Stone Age’s ...Like Clockwork, which reached number one in the US album charts.

He was asked to curate Meltdown Festival 2014 in London, which he describes as “one of the highest honours you can receive as a musician”. By way of comparison, The Cure’s Robert Smith is curating this year’s.

“At that point you look into the heavens and shout ‘fucking hallelujah’.

"It gave me a new breath of fresh air. It allowed me to come out of my box and go back into the world and create again.”