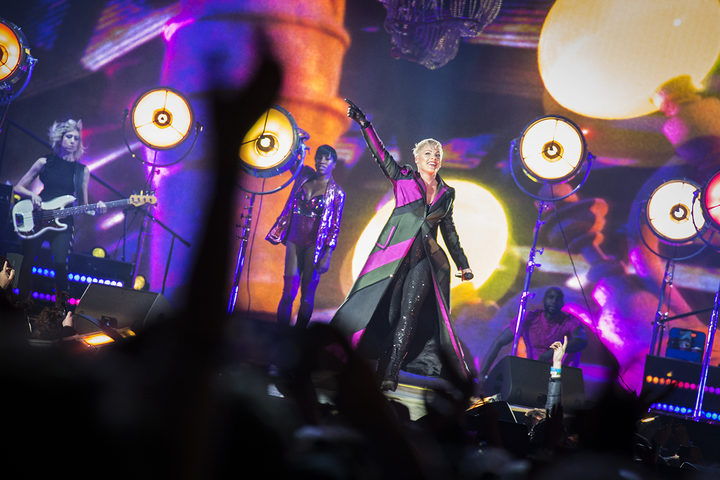 The atmosphere at Dunedin’s Forsyth Barr Stadium last night was electrifying. But as the crowd sat waiting for Pink’s performance to start, with Toto’s ‘Africa’ blasting through the venue, time dragged on and my enthusiasm dropped. Opening acts the Rubens and DJ KidCutUp seemed to finish rather fast, leaving the crowd waiting another 30 minutes before Pink took the stage.

Eventually, a man with a recorder emerged and performed a cover of the 20th Century Fox theme song, channeling the popular “shittyflute” meme. The curtain then dropped to reveal a multi-tiered stage set up with full band, string section, and back up vocalists as well as a team of dancers. A huge screen positioned behind the stage crew projected psychedelic Alice in Wonderland-inspired visuals. 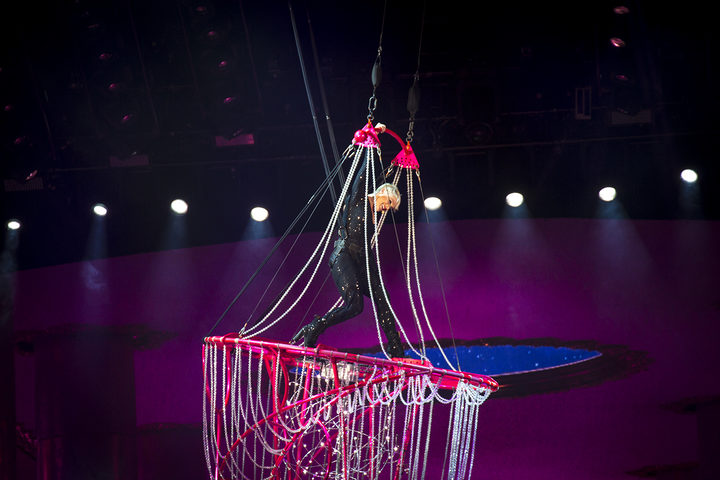 Pink opened with arguably her most iconic song ‘Let’s Get The Party Started’. The first glimpse we saw of the singer, she was suspended high in the air on an enormous pink chandelier. It was clear that acrobatics was going to be a staple ingredient of the show.

The set remained vibrant throughout the performance, changing every three to four songs. After the psychedelic introduction, the set evolved into an equally spectacular, but considerably more creepy carnival scene. At one point early in the set, a huge ten-meter-tall blow-up Eminem doll made a brief and confusing appearance, moving around and rapping his verse in the song ‘Revenge’.

The climax of the show was, hands down, when Pink was suspended right in the middle of the stadium, floating above the crowd during the song ‘So What’. The crowd was enraptured as she darted towards individual crowd members. 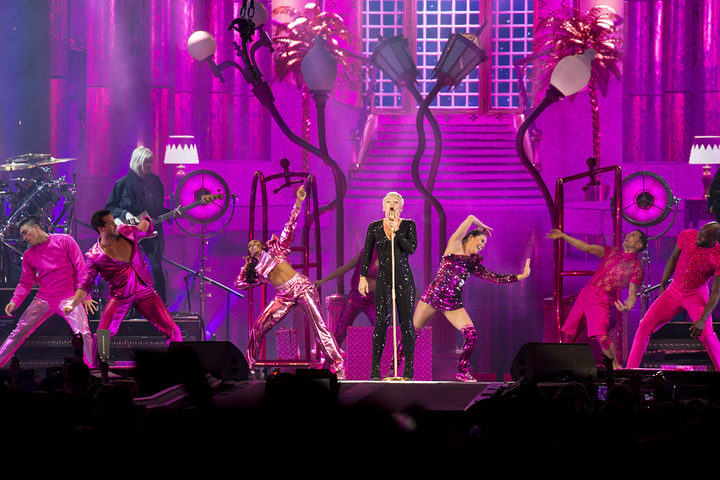 Earlier in the set Pink paid homage to another queen of pop, screaming out, “How much do you guys love Gwen Stefani?!” before seamlessly segueing from her track ‘Funhouse’ into a cover No Doubt’s ‘Just a Girl’.

Not only was the show visually overwhelming and physically impressive, its underlying theme seemed to be focused on Pink’s political ideals. Footage of her early career as a musician played on the big screen, overlaid with audio from old interviews, which painted a picture of someone who supports the underdog and is frustrated by the inequality faced by women and people who exist on the fringe of society.

It was clear from the moment Pink appeared on stage that this was not a performance solely about the music. The Beautiful Trauma tour was a theatrical extravaganza. Everything from her interaction with her fellow stage mates to her seemingly genuine banter with the crowd, made for a captivating experience that was empowering to see.

Ashleigh Nicholl is a full time student at Otago University, studying anthropology and communications. She's also the drummer/guitarist in all-girl punk band Mary Berry. You'd usually find her listening to bands like King Gizzard and the Lizard Wizard, Pavement, and local Dunedin acts Koizilla and Fazed on a Pony.

Get The Party started

Just Give Me a Reason

Glitter in the Air