Don’t say what you’re about to say. As Céline Dion prepares for her three Auckland dates, RNZ Music 'gets serious' about Canada's sweetest export since maple syrup. We also discover that one of her cousins works in our building. 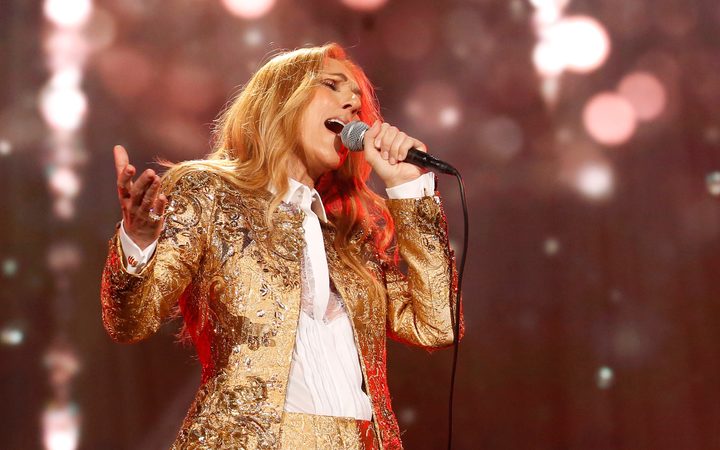 1. CANADA NEEDS CÉLINE FOR ITS OWN SELF-ESTEEM

The first thing you need to know about Canada is that Canadians are always interested in trying to make the US and the rest of the world know that they exist, explains RNZ Concert's David Houston.

“I think Canada and New Zealand have very similar experiences of being in the shadow of a larger nation next door.”

It's important to have people like Céline, who's released over 150 singles that have collected a swathe of gold and platinum certifications worldwide.

New Zealand’s most famous singing Canadian, Tami Neilson explains that Céline is like 'your favourite auntie that sometimes embarrasses you with her honesty and openness. She's so uncool that she's actually fabulous. That's quite Canadian'.

"She sang this iconic song and basically made fun of herself", and fellow Canadian Ryan Reynolds.

“It’s good to see that there is that kind of sense of humour,” says David. The rest of the panel are in agreement that being seen as funny is important to Canada, the nation sometimes referred to as America’s Hat.

2. IT IS NO ACCIDENT THAT CANADIANS OVER-REPRESENT IN POP MUSIC

Tami Neilson, with tongue firmly in cheek 'can only guess that it has something to do with maple syrup. Coats the throat and all that, eh?'. That's a lot of throats: Neil Young, Leonard Cohen, Shania Twain, K.D. Lang, Bryan Adams, Joni Mitchell, Michael Bublé, Feist, and maybe Drake and his autotune?

But RNZ Business reporter and cousin of Céline, Nona Pelletier has got news for us.

“We’re all related,” says Nona who recently learned of the shared ancestry 'thanks to the Internet'.

“Even Prime Minister Justin Trudeau is one of ours,” adds Nona.

When Nona means “ours” she means those who have descended from the Percheron, a select group of 17th Century French immigrants from Perche.

“I should get a family discount,” reckons Nona on the subject of tickets to 'cousin' Céline’s concerts. It's been 20 years since the singer has toured New Zealand.

With such talent in her DNA it’s hardly surprising that Nona herself shines as the Business Reporter on Checkpoint with John Campbell.

Even though she’s frustrated she can’t sing like the rest of her famous cousins, we’re so glad she can make the NZSX sound so compelling.

3. CÉLINE DION IS A UNIFYING FORCE FOR GOOD

David Houston hails from a small town just out of Toronto. He admits he’s not a Céline Dion fan, but that she did have an impact on him in his early teens with her French song ‘Ziggy’

The whole video was about the unrequited "falling in love with a gay man. There was even a steamy locker room scene with naked men running around".

In David’s eyes, the video highlighted the cultural differences between the worldly, 'heart-on-sleeve' sophistication of French Canada and the buttoned-down 'puritanical reserve' of the English part of the country.

“You look over and go, what are the French doing over there! ... It was completely different,” and groundbreaking in 'early 90s Canada' when it was 'a really challenging time to be to be gay', David explains.

"Céline was always very supportive of the Pride community and both the French and English embraced her".

“Quebec is like a slice of Europe and very different to the rest of Canada, a bit like how New York City is like its own country apart from the States. They have their own identity and a very strong sense of who they are and what they like. Their musicians are also known for being quite over-the-top and deemed ‘cheesy’ by the rest of Canada.”

Tami concludes that "the minute she broke internationally, she was, of course, celebrated as all of Canada's".

Super-fan and ex-pat Andrea Wadsworth agrees with Tami adding, "The fact Céline is French Canadian gives her an extra edge of Canadian-ness."

Tami and Andrea, both of whom are going to the forthcoming Céline shows, freely admit that the power-ballad diva is ‘cheesy’ and ‘corny’.

“There are so many sassy lyrics,” says Andrea of her favourite song ‘It’s All Coming Back To Me’.

"There’s a line ‘I finished crying in the instant that you left’, which makes her seem staunch. They hit the feminist nerve in me.” Andrea says she’ll be printing a twist on her favourite lyric on a t-shirt for the concert on Saturday: ‘The nights of endless pleasure’. 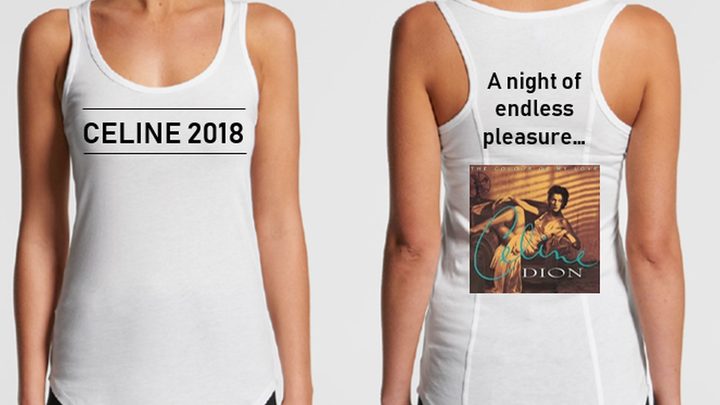 Tami won’t be wearing any homemade merch at the show, but she will be 'swaying with her girlfriends ... waving my cellphone torch while singing every word and tears are streaming down my face into the smile so huge my face might crack'.