Live music photographer Garry Brandon on 40 years in the job

Metallica used one of his photographs on a live album cover; a shot he took of jazz great Robert Jr Lockwood is on the cover of Jimi Hendrix Blues; and his photos have appeared in books including Live: Gigs that Rocked New Zealand. We catch up with Garry Brandon – Spark Arena's in-house photographer – about his 40 years in the biz. 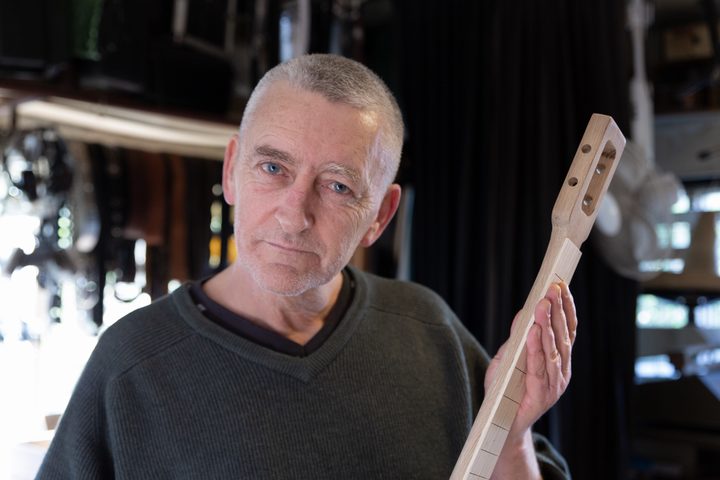 Garry Brandon with one of his hand-crafted guitars Photo: RNZ/Tom Furley

If you’ve been to a gig at Auckland’s Spark Arena, chances are Garry Brandon was up the front.

He’s been the venue's house photographer since it opened in 2007, but his collection of ticket stubs and media passes – each perfectly preserved in plastic-sheathed folders – dates back the late 1970s when Garry still lived in his hometown of Dublin.

The collection represents forty years of concert photography, in which Garry's snapped some of music’s biggest names. 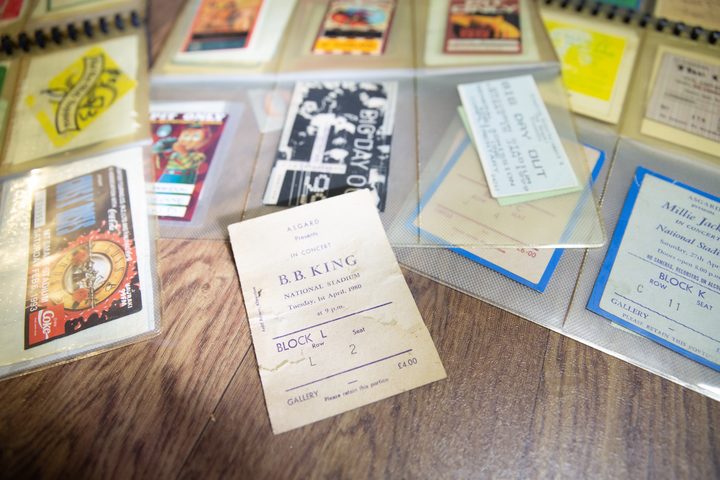 Some of Gary Brandon's many ticket stubs Photo: RNZ/Tom Furley

“I saw the Rolling Stones at a big outdoor venue called Slane Castle in Dublin, which is a big natural amphitheatre beside this amazing old castle.”. 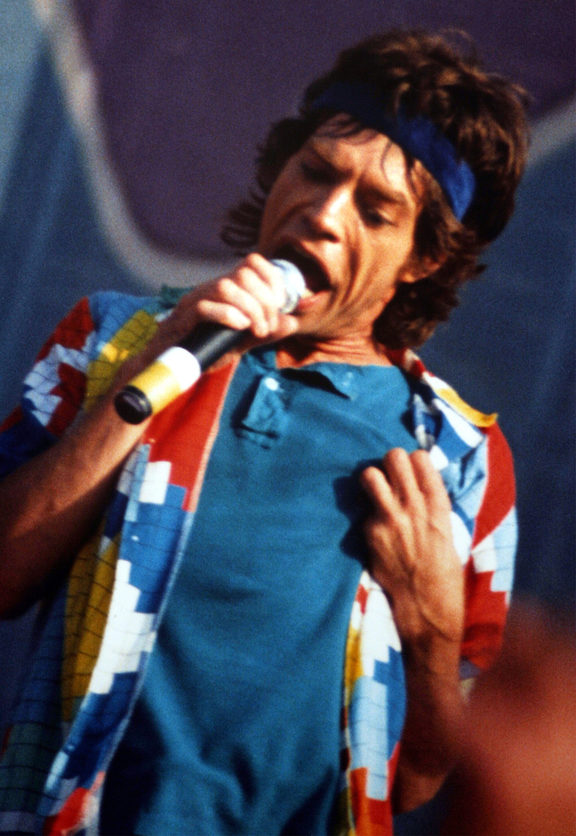 “I managed to get as close as I could to the front - which wasn’t very close but I was near the end of a big long catwalk, so I stayed there and sure enough Mick Jagger came out right to the very end, so suddenly he’s about 10 feet away from me.

"I got some really close photos and the buzz was amazing. It was so exciting to have this guy right there in front of me and to get such close photos."

After using his father's camera at local gigs he bought himself an SLR which he often snuck into bigger gigs like Rory Gallagher, Elton John, and ZZ Top.

“After a while I just got hooked.”

Everything was shot on film, meaning each photo cost money and the roll was finished in 36 photographs.

“I went to [Bob Marley and the Wailers] with a group of people and sneaked my camera in and got a couple of photos from miles away – he’s not very big in the picture.

"When we left the venue we were just passing a hotel and this bus pulls up and stops outside the hotel and it was Bob Marley’s bus.

“We were the only people there basically and the whole band came off the bus including Bob Marley and started talking to us and let us touch his dreads. He was actually being held up physically by two guys, his feet were dragged along the ground, he was probably so stoned.

“The thing is I had used my whole roll of film trying to get a decent picture at the concert … so here I was with an empty camera, standing next to Bob Marley, talking to him for like five minutes, and I couldn’t get a photo because I had no film left.

“Now if we’d been digital I would have had at least 3,000 images left on my card, more than enough, and he actually died three months later which made it even more of a pity I didn’t get to photograph him.

After moving to New Zealand in 1985 with his now wife Denise, Garry continued photographing for local newspapers and built relationships with promoters like Pat Shaw and Tommy Adderley.

“This is BB King, it’s composite from five different concerts,” he says, scrolling through his portfolio.

“The first one would have been in Dublin probably in 1978 or thereabouts. One of those ones where I’d sneak my camera in. The last one was at the Civic Theatre in Auckland in I think 2011.

“I really like this, it encapsulates the length of time I’ve been doing this and I like seeing the same artists over a long period, it’s interesting to see how they’ve changed.

And just as the artists have changed, so has the nature of Garry's work.

“Years ago you had a big stage with a band on there and a few lights and that was that. Now there's just so much to see and experience it’s fantastic.

“It’s great for photography, it’s just awesome. You just can’t go wrong… Unless you’re just really, really bad, it’s hard to get bad photos at some of these gigs." 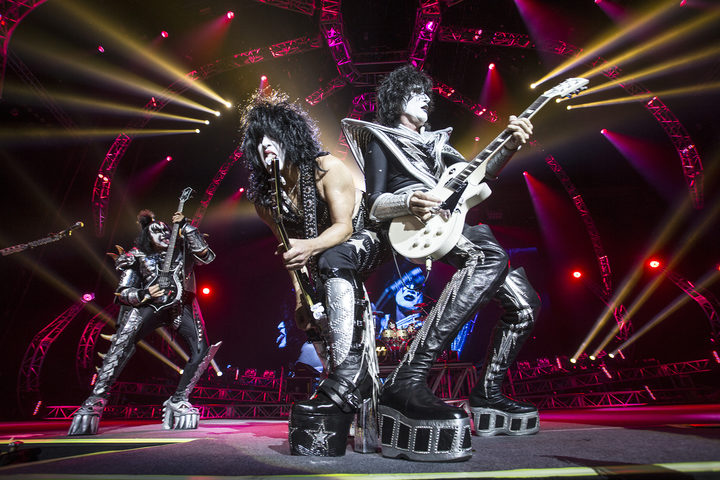 Although touring has supplanted record sales as the primary source of income for many artists, Garry says live gig photographers are not as valued as they once were.

“I don’t think they're as important as they used to be in days where the only outlet for these guys was the TV or the newspapers; they’d have ads in the newspaper or maybe a story saying they’re playing next week and then they’d have a review of it afterwards ... hoping someone will read it and go buy a record.

“[Fans] can now go on Facebook or Twitter or Instagram, whatever it is, and find hundreds and hundreds of photographs and comments and little video clips from that show last night. So they are providing the band and the promoter with ... free publicity. 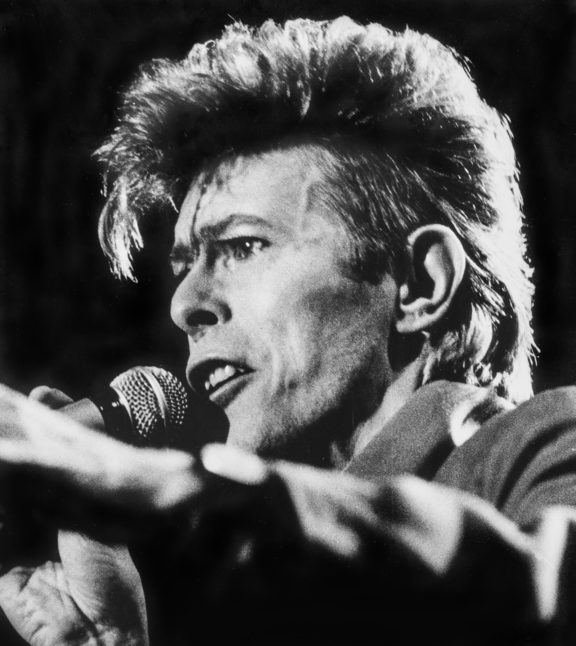 “Nobody’s relying on X photographer from X publication to hopefully get a photograph that we can look at tomorrow in the paper. There’ll be hundreds of them don’t worry. And they’ll be great shots because iPhones and Samsung Galaxies they take amazing photographs ... they’re incredible and high definition video. Everyone’s got one.”

The other worrying trend developing in recent years, he says, is bands exclusively using their own photographers.

He says they mainly seem to be American artists and it appears to have stemmed from some unflattering photos of Beyonce that appeared on the internet several years ago.

“I don’t know who this person was, and I’m sure it’s not the first time that somebody’s published an unflattering photo of somebody but it happened to be Beyonce and we all know image is number one in their world.”

“As a result of that Beyonce’s people decided ‘no more photographers at our shows, we’ll use our own photographer’.”

Capturing a good facial expression can be hard and he says all photographers will return home with plenty of photographs they would never use.

But unfortunately, the trust has been broken for some.

“It’s getting more prevalent and I can see a time when local press photographers probably won’t even be allowed to photograph shows.

Things can already be heavily restricted: photographers tend to be confined to selected places and have a limit of 10 minutes to shoot at the start of the show. 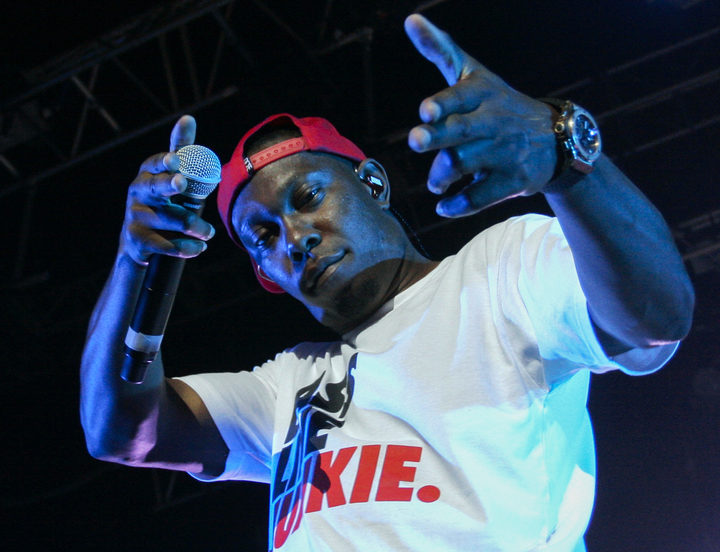 In recent years, Garry has adapted his home’s 70 square metre studio make way for another of his other passions – making electric guitars.

“I’ve sold a few and I’m pretty sure I’m going to sell all these when I’m finished. They’ll be bloody good guitars you know, they’re all very well made.

“I love doing it and I love selling them … and as I say, photography's getting harder and harder to make money so it’s hopefully something I can build up and get a bit more of a regular income from."

He’s also set himself the task of digitising all his files from the boxes of old film and negatives that sit under his desk. He hopes one day to print a book of his work.

Despite his having taken so many remarkable photos in his career, few prints adorn the studio. Instead, at least 20 guitars of various shapes, colours and sizes are hung on the walls. 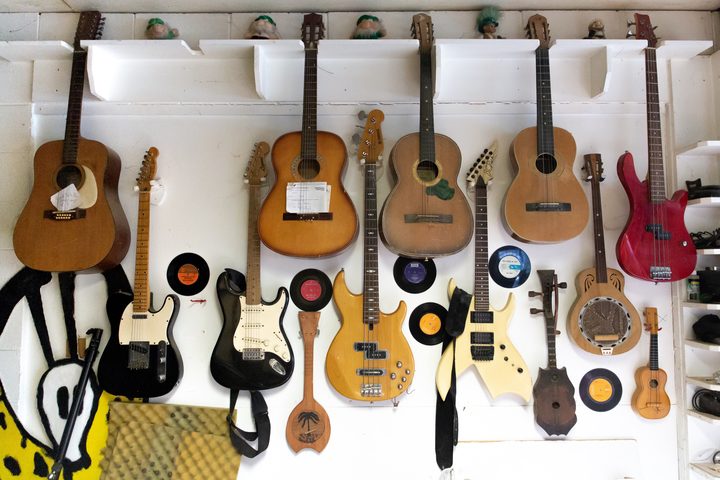 A keyboard stands close at hand beside his desk, and a drum kit peeks out from behind a curtain in the corner of the room.

“Music has always been first, I’ve always been most passionate about music rather than anything else. There are a still a lot concerts around that I’ll go to and nobody’s paying me.

“It’s a job but it’s also a job I’d still sometimes do for nothing." 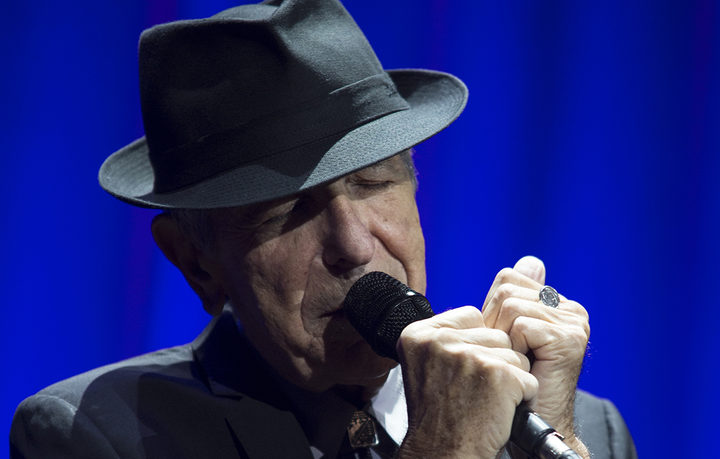 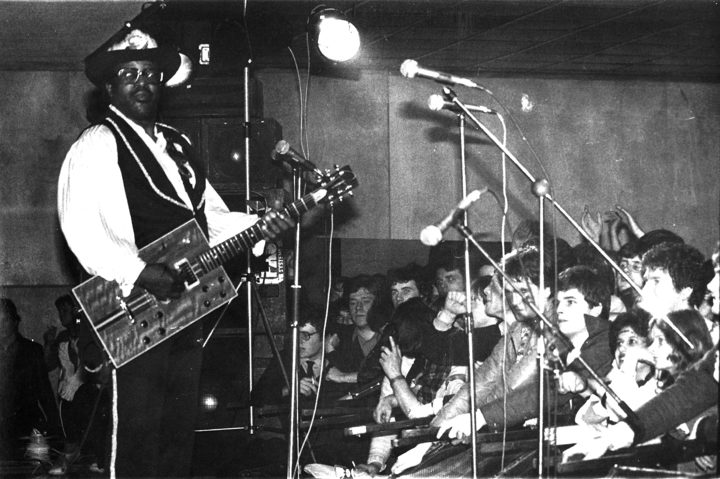 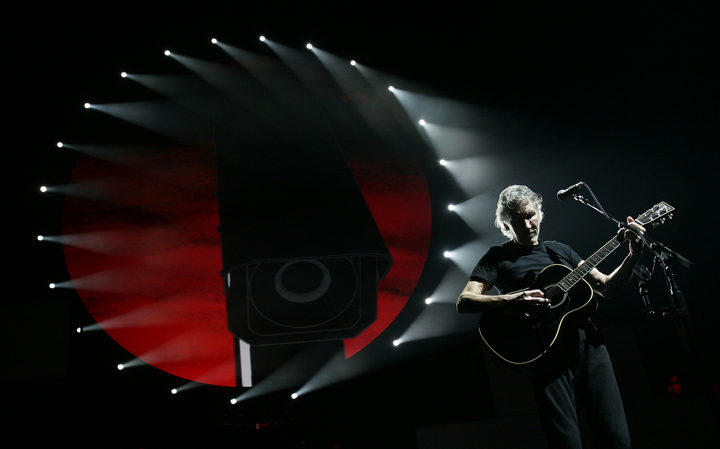 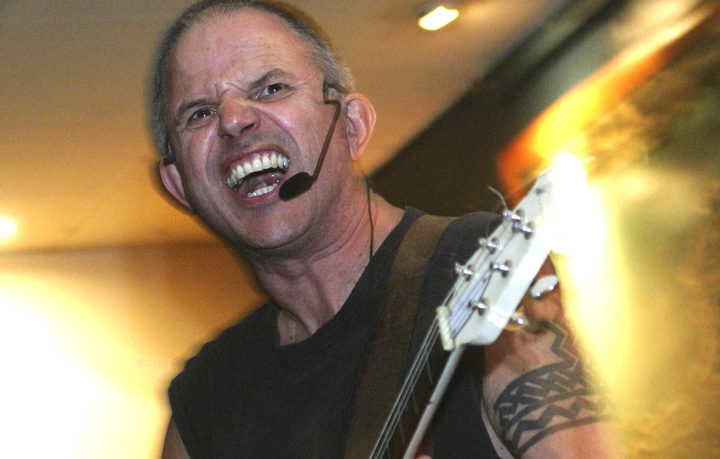 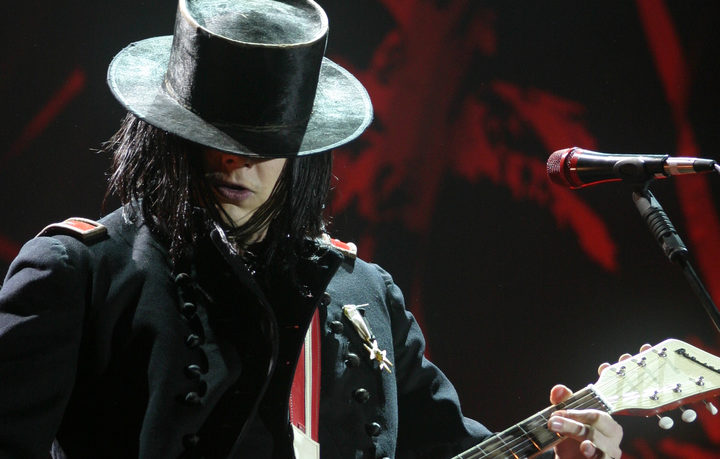 Jack White at the Big Day out in 2006 Photo: Garry Brandon