RNZ Music is excited to be the first to share the new video from Northland thrash-metallers Alien Weaponry.

‘Whispers’ is the band's most political song yet, and includes blunt statements about the foreshore and seabed, the Treaty of Waitangi and the TPPA (Trans-Pacific Partnership Agreement).

The song opens with an excerpt from an interview by RNZ’s Kim Hill with former Act Party leader Don Brash, in which he airs his controversial views on RNZ presenters' use of te reo Māori, as well as other issues including colonisation and the treaty. At the time, some condemned his opinions as racist.

“It’s kind of scary how many people share his views,” says drummer Henry de Jong. “They don’t seem to understand that the current policies are there to help redress the imbalance that was caused after over a hundred years of colonisation. 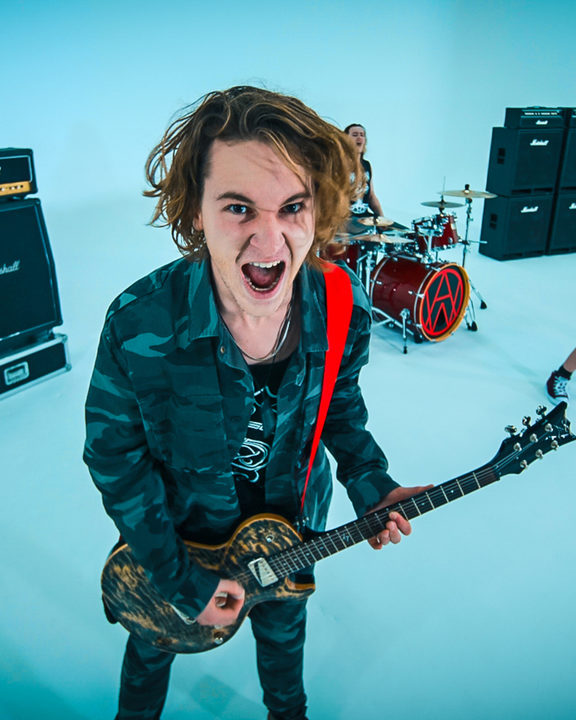 “During that time, millions of acres of Māori land was stolen, they were excluded from voting and children were punished for speaking Māori in schools, and that’s just the tip of the iceberg.”

RELATED: Alien Weaponry set to play at the biggest heavy-metal festival in the world

The ‘Whispers’ video features images of the 2004 hīkoi against the Foreshore and Seabed Act. Henry and fellow band member Lewis (then aged four and two) were among the 40,000 people who marched on parliament to oppose the legislation.

Also featured in the song and video are former Labour MP Tariana Turia, who crossed the floor to vote against her own party on the bill; and well-known Tuhoe activist Tame Iti, who was famously charged with treason for shooting the New Zealand flag.

The video shows the band – performing in a clean, bright environment, set against a backdrop of political chaos: protests, arrests and other controversial moments roll in the background as the Waipu trio slam home their message.

‘Whispers’ is from Alien Weaponry’s debut album Tū, which came out last month.

The band is made up of 17-year-old drummer and backup vocalist Henry de Jong, his brother, 15-year-old guitarist and lead vocalist Lewis de Jong, and 15-year-old bassist Ethan Trembath.

They have just embarked on a comprehensive Europe tour, where they’ll be playing some of the world’s biggest metal festivals. Their first show is in Berlin, tomorrow morning NZT.

RNZ Music is following the band’s journey across Europe, creating a 10-part video series, which will be released online later in the year.

Hide away the truth, playing on our fears
The government’s words are like whispers in our ears
The people will find out the truth about our nation
A greedy system that shuts down our voice with legislation