It’s 50 years since well-loved 60s folk-pop group The Seekers broke up, but they’re far from forgotten. They made three television specials in their last three years together, which have just been released together for the first time on DVD. 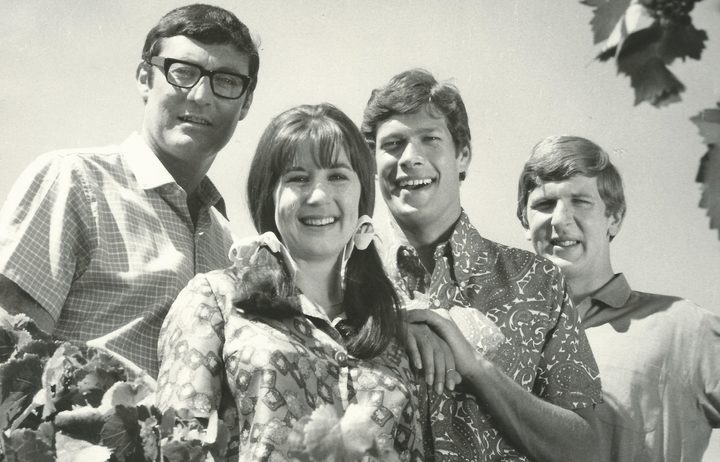 You know their songs, I’m pretty sure every Antipodean does. My mum heard them as a child, she played them to me, I play them to my kids now. Maybe your family is the same. They’re timeless, earwormy, intergenerational classics written over 50 years ago, and they’ll be around for another 50 years to come.

This down-to-earth, wholesome folk-pop quartet from Australia ended up jostling with The Beatles and The Rolling Stones for the number one spot in the charts for a couple of years in the mid 60s; they still hold the record for the largest concert ever in Australia; and they’re – as far as we know, the only well-known group of the time whose original members are all still alive. 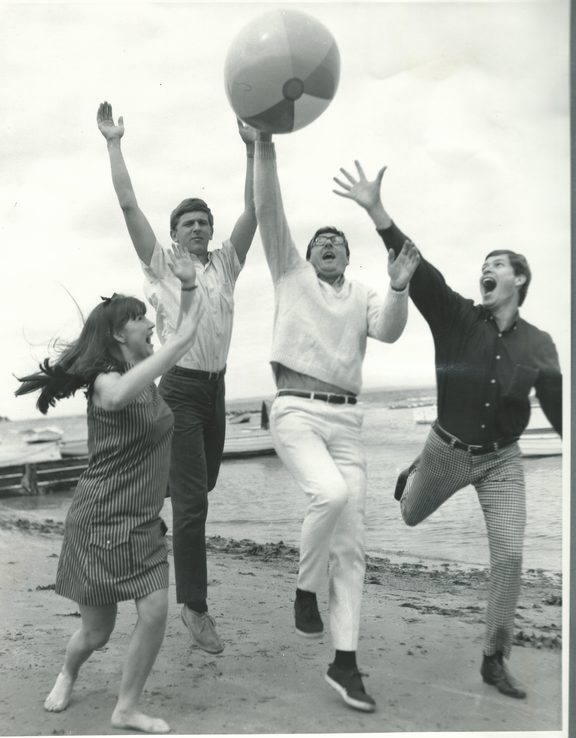 The Seekers at home Photo: supplied

“And that is unusual,” says Athol Guy, leader and double bass player of the group.

“To have the original four still together as a group, not only with the music but with the friendship, I think is outstanding. And as you say, the strength of the music, it stays on and on, through families like your own.”

They’re celebrating Judith’s 75th birthday in a couple of weeks – she’s the baby of the group, the adopted little sister of Athol Guy, Keith Potger and Bruce Woodley.

The three boys had gone to high school in Melbourne together in the late 1950s, and always played music – bee-bop and skiffle groups mainly. But there was also a folk revival happening around the UK, US, and Australasia at the time.

The Treble Clef – a coffee house in Melbourne's South Yarra, was where the group first performed with Judith. It’s a moment Athol Guy will never forget.

“The moment we struck up together vocally, we felt we suddenly had something quite special. You couldn’t manufacture it, it just happened.”

The Seekers originally had a male lead singer, but when he got married, he couldn’t come play with the boys so much. The group was scouting a couple of female jazz singers in the city, but before they had time to go and see Judith, who Athol had heard about, she turned up to start a job at the advertising agency where he worked.

“She stuck her head around the corner and said, ‘You were going to come and hear me sing, when are you going to do that?’ and I said, ‘Well why don’t you come and have a sing with us tonight.’

“She had one of those lovely voices,” says Athol. “It’s like the lead violinist in an orchestra, she was able to hold the note beautifully, so that you could hang the harmonics off it. And when you’ve got that in your ears – because basically, you’re singing through your ears – it was just that little bit of magic.

"It was a gift from the cosmos that we were all very tuneful and the voices knitted together.”

The Seekers gained a big following locally over the following year and released an album that included their debut single – ‘Waltzing Matilda’. In 1964 they jumped on a cruise liner as the house band, travelling around the Pacific, then to England. 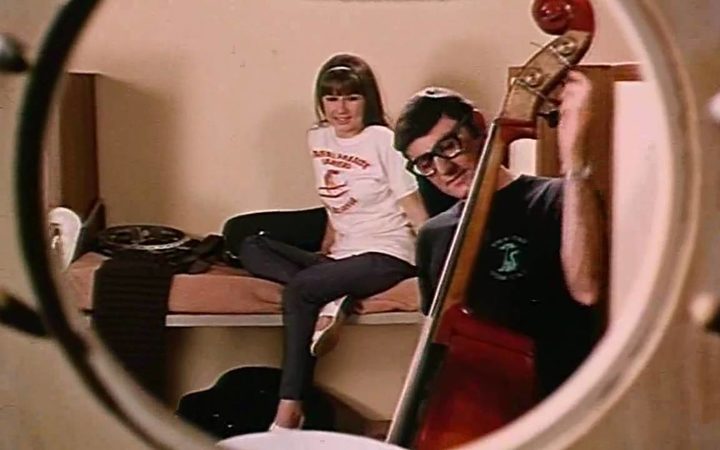 They only planned to stay 10 weeks in London – just until the ship turned around, but the industry swept them up and within weeks they had a manager, gigs and TV shows booked, a record deal, and songs being written especially for them.

The whole rise to fame is dramatized in The World of The Seekers – the third of their TV specials, which were created in Australia after their return in 1966. There’s a scene where the men in the band head into their new manager’s office, and hear the first song written for them by their new secret-weapon songwriter – pop star Dusty Springfield’s brother Tom.

In the scene Judith is at the dentist, and is played the song down the phone as she lies back on the dentist’s chair. It’s amazing that Athol knew the dentist’s number off by heart, and lucky that Judith didn’t already have a drill in her mouth.

“Look it’s a bit of artistic license” says Judith of the re-enactment. “But funny thing is Tom did ring me, I’d actually got back from the dentist, and Tom played me the song over the phone.”

Judith’s response was luke-warm. With her jazz, gospel and folk leanings, ‘I’ll Never Find Another You’ wasn’t what she expected.

“It never ever occurred to me to think that it could become a huge international pop song which would sell a million copies around the world. It just completely changed us into a pop group.”

The Seekers were booked into Abbey Road recording studios in 1964. The Beatles were there too but the bands 'passed like ships in the night, with a cursory wave' says Athol.

“They used to record through the night and we’d record in the daytime … they used to rehearse there as well, and we had our stuff pretty well rehearsed before we went in – it was a lot simpler for us.”

They were the right sound, for the right place, at the right time. ‘I’ll Never Find Another You’ was the second highest selling single in the UK for 1965, and Athol says it hit a different part of the music market than their studio mates.

“Our fans came from that middle-of-the-road family audience where The Beatles and the Rolling Stones were battling it out for a share of the younger market.” 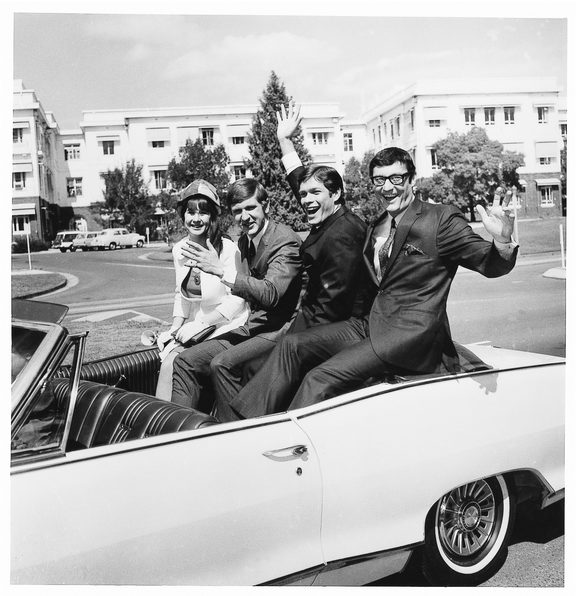 Seekers fans may not have been quite as maniacal as Beatles fans, but they were still devout. In Australia and New Zealand Judith recalls hordes of fans turning up to the airport to greet them. They’d line the streets, and try to get autographs through the car windows.

“I mean our boys, they were attractive,” says Judith, “But I think perhaps having a girl in the group – and I was quite straight-laced, my idol was the Queen, and I’d try to dress like her – so I think that might have been a more sobering aspect.”

“I was very daunted by everything, I was so out of my depth. I think I had a very sheltered existence, and that was probably a good thing – there was no sex drugs and rock and roll kind of thing. We’re just normal people, all four of us.”

In the heyday of Carnaby Street fashion, The Seekers came from Australia looking like 'a secretary and three bank tellers'. The group were criticised by U.K. media, and management made suggestions about the way Judith should dress.

21-year-old Judith compared herself to other women stars of the time – Lulu, Sandie Shaw, Twiggy, and Dusty Springfield, and saw that they were all rake-thin. Behind the smiles and upbeat songs, she struggled with social anxiety and an eating disorder. She’d spend hours and hours making her own clothes to fit flatteringly on her size 16 body.

The Tom Springfield penned song 'Georgy Girl' could almost be about Judith, and the song has taken on a greater resonance with her in the years since it was written.

Hey there, Georgy girl / Dreaming of the someone you could be / Life is a reality, you can't always run away
Don't be so scared of changing and rearranging yourself / It's time for jumping down from the shelf a little bit

Hey there, Georgy girl / There's another Georgy deep inside / Bring out all the love you hide and, oh, what a change there'd be / The world would see a new Georgy girl

Athol said that he, Bruce and Keith were aware of Judith’s low self-esteem.

“She wasn’t a party girl. We weren’t party animals, but we’d go out to the clubs when we had a night off work. She wouldn’t, she’d happily stay at home. 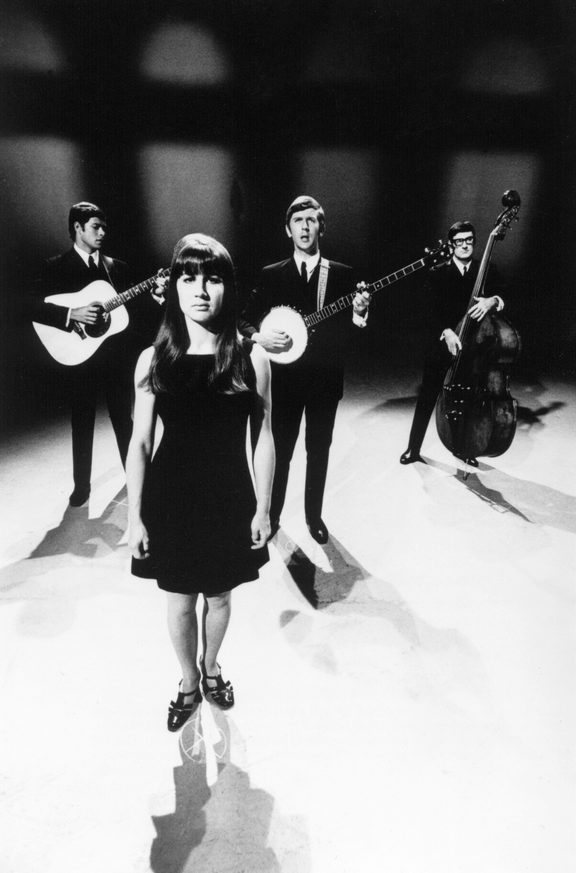 “We were close enough to understand that she was having those sort of problems. Jude had to work a bit harder than we did, I mean it’s easier for the blokes to quickly zap into whatever outfit looks neat and tidy. But she coped with that eventually incredibly well singing in all those videos.”

The Seekers returned to Australia in 1966 and filmed the first of their TV specials – The Seekers At Home. In grainy black and white, Athol cracks gentle jokes about his bandmates before they play through their hits, including ‘A World Of Our Own’ and ‘Morningtown Ride’. There’s footage of their reunions with family at the airport, a live outdoor concert, and a song aboard a train.

The trio of TV specials – The Seekers At Home, The Seekers Downunder andThe World of the Seekers, which all rated through the roof, are a slice of Australian history.

They show the Sydney Opera House being erected, Queensland’s Gold Coast before the high-rises, the early Barossa wine industry, and cute cuddly koalas crossing roads. The Seekers were mascots for Australian tourism.

“Yes that’s right,” says Judith, “And at the time we were made Australians of the Year in 1968 because it had apparently done so much for Australia.”

The final scene in the second special – The Seekers Downunder (this time in colour!), is their record-breaking 1967 performance at Melbourne's Sydney Myer Music Bowl. 200,000 people – ten percent of Melbourne's population at the time, crowded in.

“The adrenalin was certainly pumping,” says Athol, “But the moment we walked out on stage, it gets you to a point where you just simply deliver. That’s what footballers and [other sports people do] – the moment you hit the turf, that’s what you do.”

There’s a prophetic scene in the Seeker's third TV special – 1968's The World of the Seekers, where they’re dressed up as elderly residents in a rest home: slippers and pipes, wheelchairs and nurses. Young Judith muses, ‘Who knows, maybe we’ll still be playing together in 50 years.’

“We’re using that as the promo for our 60th,” laughs Athol, who is nowhere near needing a wheelchair. 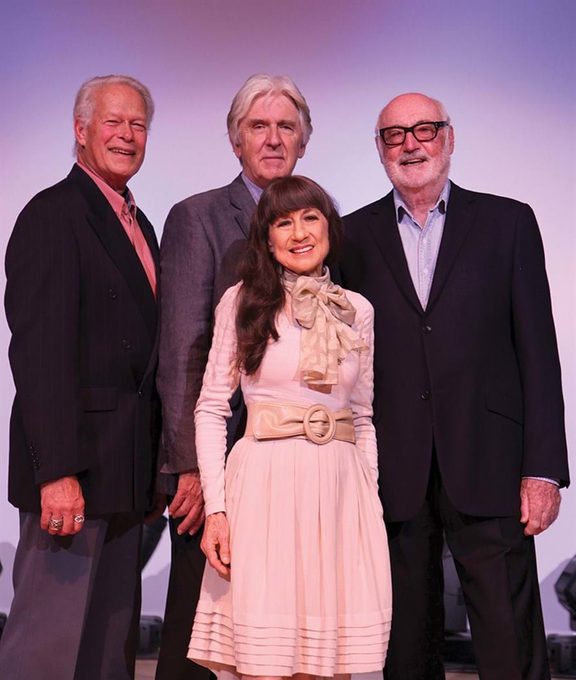 In early 1968 Judith announced she was leaving the Seekers to pursue a solo career and ‘to find Mr right’.

Fearing she'd be ‘left on the shelf’, at 24 she gave the band six months' notice, so she could go about getting married and having children. She also wanted to kick-start her solo career, and enlisted musical director Ron Edgeworth.

It turned out she'd killed two birds with one stone: Judith and Ron married in 1969, enjoying 'a happy life together' until Ron died in 1994.

In the 1970s and 80s The Seekers had reunions with a string of Judith stand-ins. It wasn't unti 1993 that their original singer re-joined.

Athol says, “We had that 25-year holiday and since then we’ve been together at another level. Fortunately for us, it’s the original four.”

There’s been a couple of close calls for Judith though – a big car accident in 1990 and then a brain haemorrhage in 2015 that destroyed her ability to read and write. Thankfully the music stayed.

She says it’s a miracle she’s speaking to us today.

Judith’s pretty sure there won’t be any more performing from her, but those songs, and that voice – they’ll be around for a while to come.