Supporting his debut album Layers and his upcoming tour, Auckland-based songwriter and multi-instrumentalist Nick Dow is joined by a string trio to showcase his beautiful songs for a very special RNZ live session.

Recently he’s been playing violin for Jamie McDell’s tour and also just got back from playing keys in Europe for Teeks, but now it is Nick Dow’s chance to be in the spotlight.

His debut album Layers is made up of exactly that – both musically and emotionally, over its nine tracks. Produced by Ben Edwards (Nadia Reid, Marlon Williams), Dow uses jazz flourishes and sparse arrangements to create sonic space that highlights his delicate and versatile voice.

For this RNZ session Nick has rearranged two of his songs – 'Afraid For You' and 'If I had Eyes', to be played by a few violins, a cello and an acoustic guitar. The result is a stunning performance, particularly of the emotional ‘Afraid For You’ – a song about his relationship with his mother. 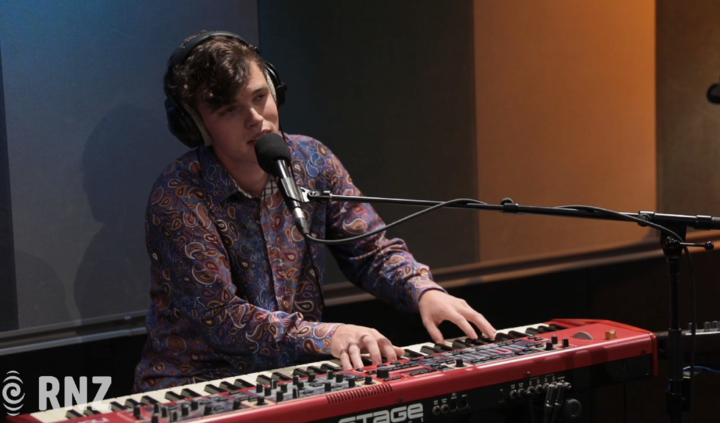 “Sometimes I feel like I write too many sad songs,” which is why he likes to wear bright colours: “I’m wary I don’t want to stand out too much but I do like wearing these things because my music often has this dark side to it and I just want to show that there's a bit of colour to me as well.”

Already an established multi-instrumentalist it's Nick’s voice that's the big reveal on Layers. The honest, soulful voice of a songwriter who is testing his craft, pushing his creativity and experimenting with form.

“It would be such a privilege to do this for a long time if I could. I’m working on a second album now. I feel at the moment I’m just working out where I might want to take it next with these songs."

“They're pretty raw and acoustic at the moment but I feel like they could go in several directions. I did SongHubs recently which was a great experience of seeing different ways in which I could take things.

“Whether it was to produce in a more electronic way, I don’t know. I kind of want to stick with my authentic sound with the real live drums, but who knows.”

To hear more Nick Dow you can check out his SoundCloud, or to see him live in June you can get tickets here.