Spotify: the biggest music company in the world 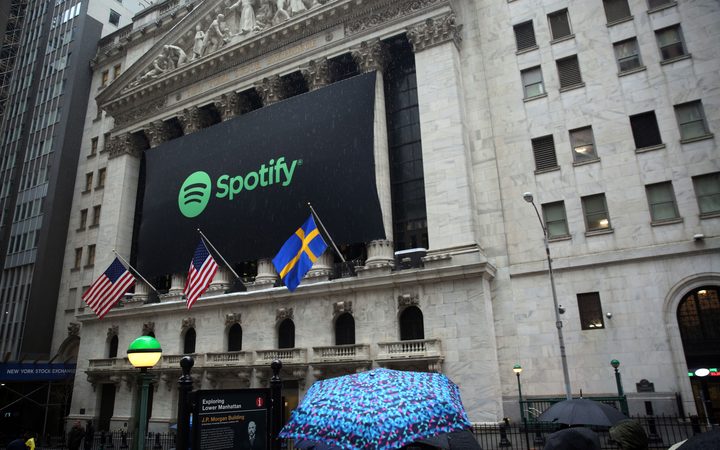 A banner with the Spotify logo on it is seen as the company lists its stock on the New York Stock Exchange in New York, United States on April 3, 2018. Photo: AFP

We live in the age of streaming. It is now the way the majority of music fans listen to music. Despite Apple Music and Amazon and YouTube all making headway in the music streaming game, there is one company that dominates the field.

Spotify is a loss-making company that may not report a profit until next decade but that didn’t stop investors this week from valuing the company at $US26 billion when it debuted Tuesday on the United States stock exchange.

To give you a reference point that’s a little higher than Twitter was when it debuted and just a scratch less than Google.

There is a reason Wall Street are flocking to Spotify despite the fact that it’s never turned a profit. It’s a growth company and its value is its customer base, but it’s also doing a great job at getting record companies to do its bidding.

Spotify’s main cost is what it pays record companies for the music it streams to its customers. As Spotify has grown that expense has fallen because it has cut increasingly more favourable deals with record companies.

Last year Spotify’s gross profit margin was 21 percent of revenue, up from 14 percent the year before, showing that it is paying less for more.

In the early days record companies were scared that streaming would be a potential risk to their bricks and mortar business of selling CD’s and records. So as a condition of granting licenses for their music the major record companies received chunks of equity.

Indeed consumption of physical units of music and even downloaded music have fallen significantly in recent years but the quick rise of streaming has increased the music industry's take over all.

But where is that money going? To artists? Not really.

The basic reason is simple: According to the data trackers at BuzzAngle Music, the top 10 percent most-streamed tracks account for more than 99 percent of all audio streamed.

Which means that all other music makes up less than 1 percent of what is streamed. Streaming is far more concentrated on the most popular music than album or song sales currently are.

This fact doesn’t matter to the major record companies, because they own those top ten percent tracks.

There are three major record companies, Universal, Warners and Sony and of those Sony had the largest chunk of equity with about 5.7 percent of Spotify. On Tuesday Sony sold 17.2 percent of its 5.7 percent netting between $260 and $296 million.

On Wednesday Sony announced its financial profit for the first quarter of this fiscal year was $US986 million.

Individuals are also doing well. Co-founder and CEO of Spotify, Daniel Ek, has a nine percent stake in the company which means since Tuesday he is worth $US2.3 billion more than he was on Monday.

Following its successful public listing Spotify is now the largest music company in the world and some are saying Ek is the richest man in the history of music.

Although Spotify hasn’t made a profit yet it’s attracting this investment because of its one true asset, 150 million users, 71 million of whom are paying their ten dollars a month.

It’s not just their subscriptions that are of value, it’s their listener data. The data serves two purposes. Firstly it helps choose what music to play you next.

The data dictates the algorithm that obsequiously chooses your music for you. This means one thing: playlists are king, and particularly the ones curated by Spotify itself.

As Liz Pelly states for The Baffler " An unprecedented amount of data (“skip rates” and “completion rates” determine whether a song survives) and “human-machine technology” are deployed to quantify your tastes. These algorithmically designed playlists, have seized on an audience of distracted, perhaps overworked, or anxious listeners whose stress-filled clicks now generate anesthetized, algorithmically designed playlists."

The aim is that you surrender to the algorithm, you forget to turn it off, it keep playing in the background.

So Spotify have started to create not just playlists, but generic, bland, wallpaper music, commissioning it for playlists like ‘licence to chill’ or ‘evening chill’ or ‘Chill-mageddon’ and paying those composers an even lower rate than they pay the major record companies.

Spotify wants you to chill.

But in today’s world that data isn’t just useful for predicting the next song you'll hear. The other valuable information Spotify listener data provides is that about the listener - demographics including age, gender and location. This sort of information is of great interest to many third parties.

When pressed on how and with whom exactly the company shares it’s analytical information with - record labels or other parties - Spotify admit that they don’t have formal arrangements.

Such sharing of data is done out of goodwill, and it's goodwill that has currency with record and touring companies for example. Want to know where your artist should tour? Play by our rules.

The major record labels have said that they will share any profits from selling Spotify shares with their artists, but have offered little detail about how that might be calculated.

Disruptive technologies are changing the way business models operate and the music industry is far from finding a model that works all concerned, in the meantime, we get to stream and chill.

*This article relied heavily on deeper and more substantial articles and research. If you’re interested in reading further, click here for a fantastic read from Liz Pelly at The Baffler and here for Stephen Witt of NPR.