RNZ Music's Nick Bollinger is at WOMAD Taranaki 2018. He gives us his impressions of day two at the world music festival. 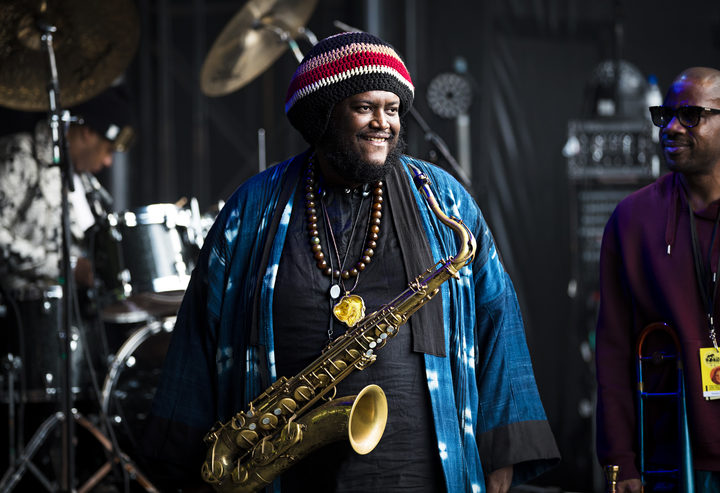 As I arrived The Spooky Men’s Chorale were warming up the Bowl Stage with their sonorous harmony and absurdist humour, and had an impressive number of punters lined up along the edge of the moat, joining in with their ridiculous moves.

An alternative to zumba or tai chi, I guess, but I headed up the hill to the Gables to catch the Cameroonian singer and banjo player Blick Bassy.

Inspired by the folk traditions of his central African homeland, but also by the early Mississippi blues that he hears as essentially African, Bassy weaves gentle eccentric songs with his banjo and voice, sometimes joined by a single horn player. Lovely music to start a day with, though it might work better on the small Dell Stage where he closes the Sunday night.

There was a more solemn atmosphere at the Brooklands Stage with an opening set by Lebanese singer Ghada Shbeir. Steeped in classical Arabic singing, her voice has a stern beauty and the accompaniment of violin, dulcimer and hand drum was dynamic, building from slow mournful introductions to rapid tempos.

It’s what I think of as hardcore Womad: music that demands – and rewards: concentrated listening. 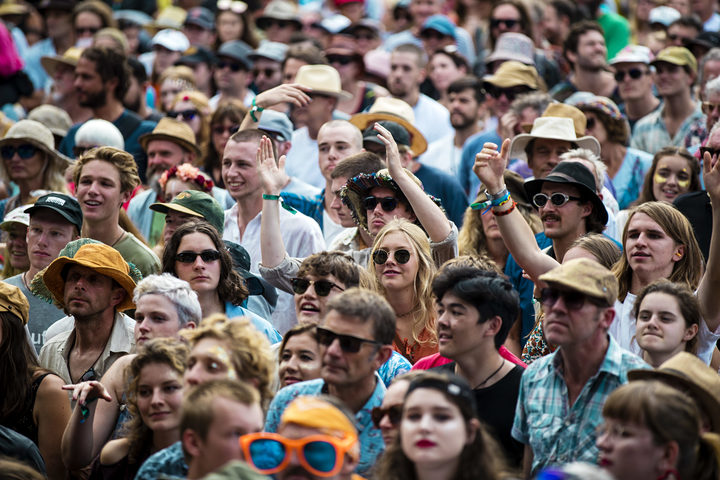 By contrast, Chilean big band Chico Trujillo, on the Bowl stage, were that other Womad staple – the party band. They started with a furious rush of energy, the combination of horns and rhythm section pulling towards a ska feel. But they ultimately settled into a more relaxed and compelling cumbia groove.

I would have listened longer, but I needed to check out Cuban singer Dayme Arocena, playing at the same time on the Gables stage. A lovely singer whose repertoire made a tour of popular Cuban styles, she seemed bemused by the crowd’s inability to follow her instructions to cha-cha-cha. “Why can’t you dancing?” she asked, then shrugged. “Well you are enjoying the vibe at least”.

Maybe it was the growing heat, or maybe you just can’t turn a field full of New Zealanders into Cubans in a single afternoon.

Heading back down to the Dell to catch Constantinople & Ablaye Cissoka was another of those abrupt transitions Womad can throw you into, stepping instantly from party vibe to quiet meditation.

Led by Tehran-born and Canada-based Kiya Tabassian, the group combine their Persian-derived sounds with the gorgeous tinkling kora of Senegalese musician Cissoka. Tabassian introduced one of the tunes as “a song with a little bit of sadness but a lot of hope inside”, which seemed to be the prevailing mood of their whole lovely set.

The meditative mood continued with the sole perfromance of Anoushka Shankar. Schooled in classical sitar by her famous father, her music makes use of traditional elements yet is far from traditional.

Her percussionist moved between conventional western drums and the Swiss-invented hang drums; another player moved between keyboard and double bass, while the piercing tone of a shennai – a sound that always evokes snake-charmers – was perhaps the most traditionally Indian thing about it.

Inspired by her concern about the current refugee crisis, her long compositions were like wordless narratives and had an almost-cinematic quality. 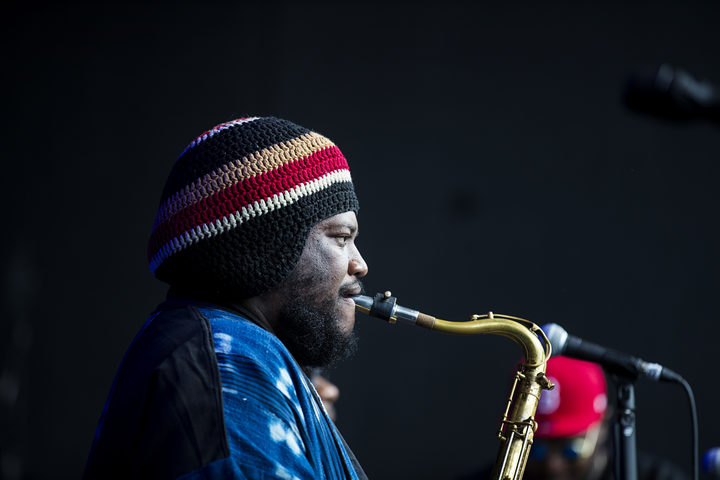 As Shankar’s set ended, another one-off began: Kamasi Washington on the Brooklands Stage. Berobed and be-tea-cosied, the statusque saxophonist might have just stepped out of the 60s black pride movement, and his jazz-funk fusion has its roots in that era too.

But the music he makes with his top-flight band comes to life utterly in the present. How often do you see people dancing at a jazz show? Here it was impossible not to, the groove set off by his two drummers was irresitible. Brandon Coleman laid out an earthy bed of funk on clavinet, before soaring into orbit on synthesiser.

Washington – whose reputation was sealed by his work on Kendrick Lamar’s landmark hip-hop album To Pimp A Butterfly and his own audacious triple-album The Epic – radiated warmth and humour, offering a “big ol’ hug” to anyone who could tell him what time signature trombone player Ryan Porter’s tune ‘The Optomist’ was in. But the quality of the playing was as serious as your life and the total effect was ecstatic. From the sublime to… well, what were Antipodean classic rockers Dragon doing at a world music festival, where the order of the day is normally exploration and discovery, not mainstream familiarity? One way to approach the question might be to flip it and imagine how exotic their music would sound to listeners if you dropped them into the middle of a festival in, say, Ghana. After all, on the Friday night, Ghanaian star Pat Thomas introduced one of his tunes as “a song everyone in Ghana knows” while it sounded pretty exotic to me.

Mark Williams – who for a number of years now has replaced the late Mark Hunter, has an extraordinary voice and could still sustain the powerful high notes on a relentless string of hits that, like it or not, are our heritage as much as Pat Thomas’s highlife classics are Ghana’s.

Still, it was a relief to come down from those pounding pop hooks to something as comforting yet strange as My Bubba’s evening performance in the Dell.Two Scandinavian women - one playing a Norwegian harp, the other guitar and both singing exquisitely – wove dark, funny homilies with delicate tunes and harmonies. Miraculously, for that hour their quiet performance seemed to hush the entire park.

But the night wasn’t over, in fact it was about to get raucous again. The Saturday closer Havana Meets Kingston could have been one of those cross-cultural jams where everything turns into barbecue reggae.

It started out with just the Cuban musicians on stage, and sounding very much like the Buena Vista Social Club did at Womad a few years ago. But then the Jamaicans made their entrance.

Somehow I hadn’t really clocked that this would be Sly and Robbie – the actual Sly and Robbie, rhythm section on those Grace Jones records, Peter Tosh classics and a thousand other reggae hits. Yet there they were, their signature sound and groove intact.

In a sense, the Cubans had no choice but to fold into the Jamaician rhythm; the reverse was never going to happen. There were moments when things teetered towards trainwreck and sometimes the mash-up was plain weird, yet it was rhythmically irresistible, hilariously good fun, often beautifully musical and the perfect Saturday night closer.