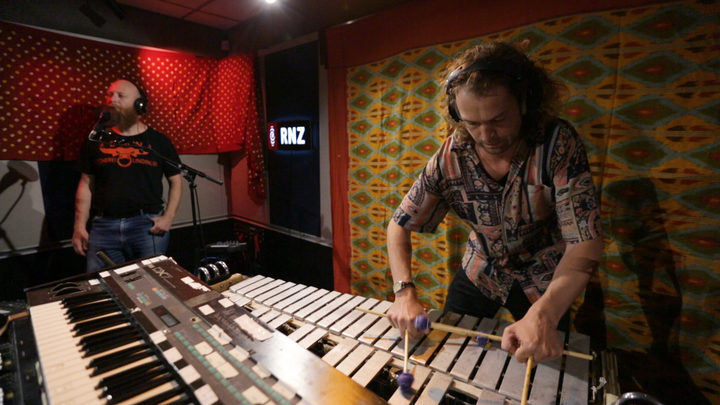 The RNZ music studio is full to bursting. Not just because of the five-piece band occupying it (plus two guest singers), but their abundance of gear.

Your standard drum kit, bass, and guitar are joined by a colossal vibraphone, a Yamaha DX7 keyboard, chimes, and even an organ. A trumpet and violin are also waiting in the wings.

The band is Auckland’s Carnivorous Plant Society, a mostly instrumental outfit that dabble in jazz, pop, and other more cinematic genres. Band leader Finn Scholes points out that he left his tuba at home – it just seemed like one thing too many.

Out in the RNZ cafeteria, there are at least three parents (Finn’s dad Jeff will join the band to recite a poem), and even two reasonably new babies (two months and five weeks old respectively).

Oh and they brought their own set dressing – a variety of patterned blankets and sheets.

The band met at jazz school some time ago, before agreeing “we didn’t really like jazz that much.”

Finn elaborates: “I write each tune on the piano, and I feel like each tune has its own little personality. Maybe even its own genre”.

This idea carries over to the band’s live performances, which feature projected animations courtesy of Finn.

As an example, Don’t Go Outside tells the story of The Wolf Pack (subjects of a documentary by the same name).

“It’s about these boys that are kept inside their house by their somewhat psychotic father. So the male vocal is trying to not let the kids out, but then the kids [represented by female backing vocals] want to go out”.

Carnivorous Plant Society’s second album The New King features some notable guests, including Lawrence Arabia, Tiny Ruins, and, on Don’t Go Outside, Don McGlashan. For our live session Tim Stewart stepped in to take his place.