REVIEW: Love Me As I Am - The Music of Mahinārangi Tocker

Despite a near-full Auckland Town Hall, Friday night's tribute to Māori musician and activist Mahinārangi Tocker felt like an intimate commemoration of someone dearly loved and missed by a community of songwriters. 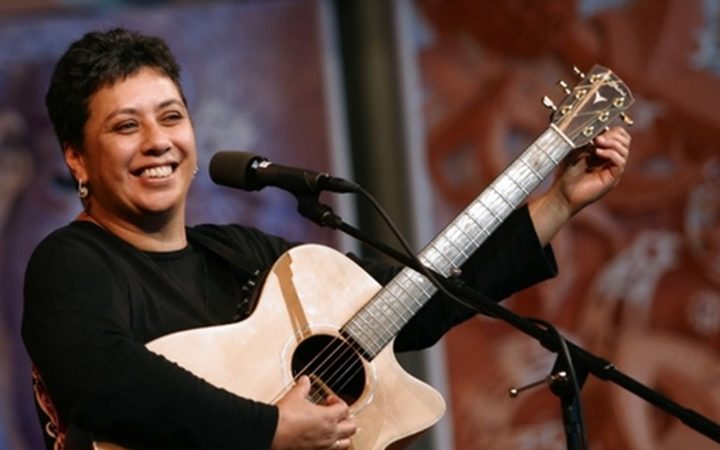 From early on in her music career in the 1980s, Tocker established herself as a powerful voice for women, gay rights, Māori identity and mental illness.

The selection of songs sung by friends and whānau on Friday night captures her spirit of defiance, sincerity, tenderness, hopefulness and humour.

To interpret and perform the complex intricacies of Tocker’s music is clearly no mean feat, but each song is carried through beautiful arrangements by a string quartet featuring composer and Silver Scroll winner Claire Cowan, and a backing band led by prolific producer and songwriter Jol Mulholland.

From the darkened stage a karanga (welcoming call) rings out before Tocker’s daughter Hinewairangi and family members sing ‘Te Ripo’ – the opening waiata and title track from Tocker’s 1997 album.

‘Ripo’ is translated as ‘whirlpool’ – and that’s how the song sounds, with layers of harmonies swirling into a beautiful, eerie resonance.

Video clips of performances or interviews with Tocker punctuate the live music, showing the power, deftness and tenderness of her voice.

In a video performance of ‘Wahine Toa’, she hits a pitch-perfect falsetto note, and as the same song is performed onstage afterwards, you hear just how unique her voice was.

“If I close my eyes, I’m channelling the Gluepot,” Moana Maniapoto banters, before launching into her protest song ‘Papatūānuku’.

Maniapoto's stories - and memories shared by Anika Moa, Annie Crummer and Charlotte Yates - give a sense of what it must have been like at the fabled Ponsonby venue where these friends shared their lives and songs.

They joke of the difficulty in covering songs by Tocker who has a “Cirque du Soleil” vocal range, as Maniapoto puts it, but each artist, under the creative directorship of Tama Waipara, brings their own personality to Tocker’s work, revealing the beauty of each song in a new way.

Tocker’s songs often feel more like poetry than music. The complex way her words lead a song onward defies the conventions of what you mostly hear in popular music.

As she says in one of the video interviews, Tocker didn't have the looks or songs teenagers would like. But that’s what makes her music so fascinating – every song has a story of depth or a declaration of identity.

In ‘Ending’, Nadia Reid’s warm voice with the quartet’s strings gives a lushness to what sounds like a song of heartbreak, as she sings: “You wanted to mend me, but I was not broken.”

In ‘When I Grow Up’, Don McGlashan is alone on stage with his acoustic guitar and what looks like a flugelhorn, He uses a looping pedal to build up a torrent of sound before dropping into the chorus: “I want to be mad with courage, lost in living.”

Through the show, there’s that sense of hopefulness and fun in Tocker’s musical personality.

As Annie Crummer sings “the heart has a serious problem” in ‘Danger Kissing’, she turns to the flirtatious ballet dancer on the stage beside her, and for the rest of the song they’re caught up in each other’s presence.

The show ends on that hopeful note, as Tocker’s whānau sing the anthemic ‘Forever’, with the building chorus: “I will not walk these streets of ages into forever alone”, and all the performers are joined onstage by the colourful GALS choir (Gay and Lesbian Singers) to sing the final chorus of ‘Love Me As I Am’.

Love Me As I Am: The Music of Mahinārangi Tocker paints a picture of one of Aotearoa's most prolific and powerful songwriters.

The performances by Tocker’s collaborators and those she influenced reveal the strength, intelligence and humour of an artist not as celebrated in New Zealand as she ought to be. 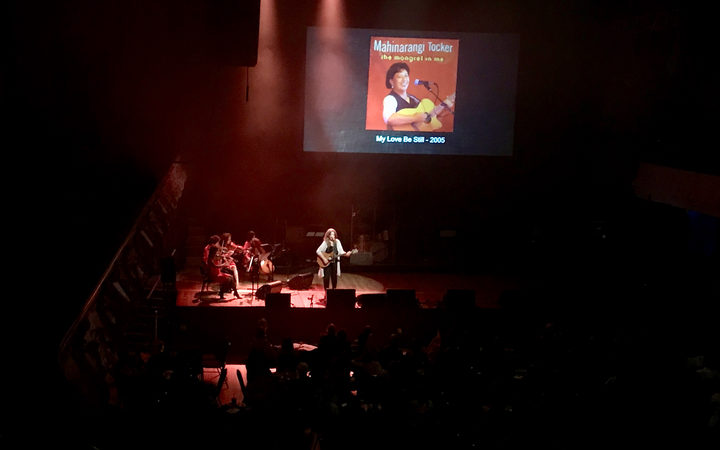 Shona Laing performs in 'Love Me As I Am: The music of Mahinaarangi Tocker' at Auckland's Town Hall. Photo: RNZ / Matthew Hutching

Love Me As I Am: The Music of Mahinārangi Tocker is on again tonight at the Auckland Town Hall.

What: Love Me As I Am: The Music of Mahinārangi Tocker