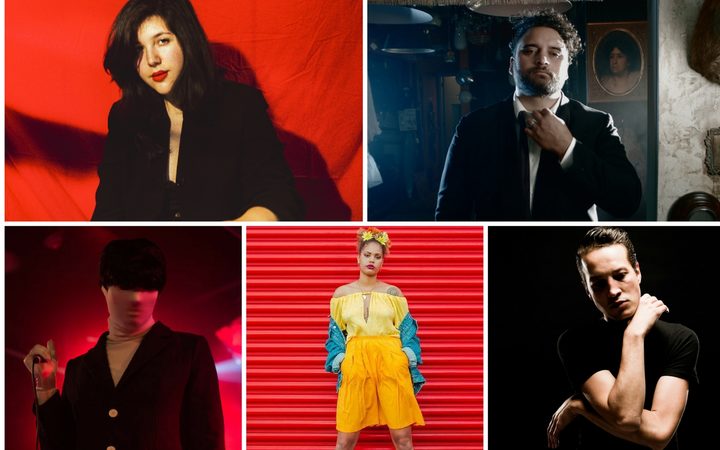 Man of the moment Kendrick Lamar curates a soundtrack for the Marvel blockbuster Black Panther that is a comprehensive and accurate survey of where hip hop is at. The album features the current who’s who of the world’s most popular music genre including Lamar himself, Khalid, Schoolboy Q, Vince Staples, and The Weeknd.

‘All The Stars’ features a wistful, emotional (some would say cheesy) chorus from SZA and the accompanying video is a mini-film itself. Full disclosure: I am yet to see the movie, but this song transports me to that moment in a darkened theatre, feeling triumphant and satisfied when the epic banger track booms out in surround sound as the credits roll and I desperately try not to leap up and dance.

But alongside the euphoria, there is weariness in this song, something that often underpins Kendrick’s work, where all is not well and can never be in the lived experience of an African American man.

Young Fathers - 'In My View'

This Scottish trio are one of the most interesting outfits in the world right now. Impossible to summarise musically, they meld hip hop with African influences, barbershop harmonies and the rough edge of punk. All three members are frontmen, fluidly slipping between rapping and singing while drawing on their whip-smart political nous.

'In My View' is one of the more triumphant songs in their catalogue, featuring yelped backing vocals parlaying with a minimal bed of tribal percussion and a few synths.

But it’s the three lead voices that are the main attraction, soaring with emotion or murmuring conspiratorially, serving up a banquet of lyrics to savour.

Jess B is the Kenyan-born, Auckland-raised rapper whose star certainly deserves to be on the rise, or so we seem to think here and here at RNZ Music. Last year’s Set It Off gave us an idea of how broad her influences were. This single, from her EP Bloom has that reggaeton vibe with P Money’s beat and Rubi Du’s dancehall chorus combining for one of the best local tracks of the entire summer.

The bars are clever and fun and bold and the combination of her and Rubi Du (AKA the incredible MC Silva) are so good, particularly in the excellent video.

Marlon Williams - 'The Fire of Love'

Lyttelton’s Marlon Williams released his second album Make Way For Love in February, a deluge of creative outpouring after his breakup with Aldous Harding. He exploits the drama of that experience and at times really nails the feelings of your first heartbreak, with thoughtful lyrics, swoony strings, and longing, lonesome harmonies.

He said this was the song he was proudest of on the album, and his voice on this is beautifully mellifluous and sensitive. I also like the instrumental section that sounds like The Phoenix Foundation jumped in for a jam.

Janelle Monae's forthcoming album is called Dirty Computer and she describes it as an "emotion picture". It's due out in April. Expect something not dissimilar from Beyonce's Lemonade with a full length movie to accompany the release. In this song she is rapping, and she positions herself at the very beginning of the song as the queen of her palace - rightly so! 'Django Jane' has many excellent lines such as:

And hit the mute button

Let the vagina have a monologue

I can't wait to explore her Queendom!

Troy Kingi’s album Shake that Skinny Ass All The Way To Zygertron is a straight up slab of spaced out, cosmic funk, equal parts a nod to the forefathers of Māori futurism as it is a shout out from a distant 25th Century galaxy.

This album has sustained me through our sizzling summer with its twiddly basslines, and outlandish narrative conceit, but mostly it’s the shimmering vocal interplay between Kingi and the album’s Executive Producer and “space filter” Mara TK.

The album’s subject matter ranges from flux capacitors, galactic prophets (‘Golden Taurus’) to the necessities of time travel (‘Time Lapsium Gangtasium’), lending the high-concept album a creative freedom from the weight and constraints of autobiographical material that could bog down an album as fantastical as this.

Somewhere in between a love song and a hate song, Jonathan Bree wraps some of his most searing lyrics in some of his sweetest music.

He hits on a killer melodic hook in the chorus and milks it for all it’s worth, first on glockenspiel, then with his voice, then allows his backing vocalists take the spotlight.

It’s perfectly structured pop song nostalgia, and it’s beautifully arranged: the lone guitar isn’t afraid to disappear every second bar; gentle percussion creeps in and out; a violin swoops in halfway through.

The net result is gorgeously romantic, until you dig into those lyrics. But by then it’s too late.

Lucy Dacus, a 22-year-old from Richmond, Virginia has just released her second album ‘Historian’. As Nick Bollinger points out, opening track 'Night Shift' has the best opening line of any album so far in 2018. Lucy has it all. Wit, character, a keen observational eye, melody, song craft, a voice full of truth and beauty.

There is a phenomenal display of confidence on this record. It’s like she’s made music for ever, everything seems deliberate.

'Night Shift' is my favourite song of the year so far and I like to think of it as a three act play with each act lasting two minutes each. The melodies from either one of these acts would have been whole songs for many other singers but Lucy combines all three to great effect.

What starts off a jilted lover’s angry tale turns into a triumphant view of picking up oneself and embracing the future.

Unknown Mortal Orchestra, the songwriting vehicle of ex-Mint Chick Ruban Neilson, has a new album Sex and Food coming out on April 6th.

The first single from it, ‘American Guilt’, was too abrasive for me at first, off the back of their 2015 album Multi-Love I expected a poppier, shinier sound so I wasn’t prepared for the blast of guitar overdrive and the weathered voice that hit my ears instead.

Familiarity has worked its magic over the last few weeks, and it’s reminiscent for me of Jack White’s solo stuff and of Queens of the Stone Age – two acts who kicked rock back into action in the early 2000s. Ruban seems to have the same mission – he’s said "In a perverse way I wanted to embrace this abandoned genre of rock music that I keep reading is 'dead' and invite people to hear what this living dead genre sounds like in the UMO universe."