To celebrate Pride Festival 2018 The Topp Twins and Possum Plows from the band Openside share stories, experiences and choose some songs for the RNZ music mixtape. 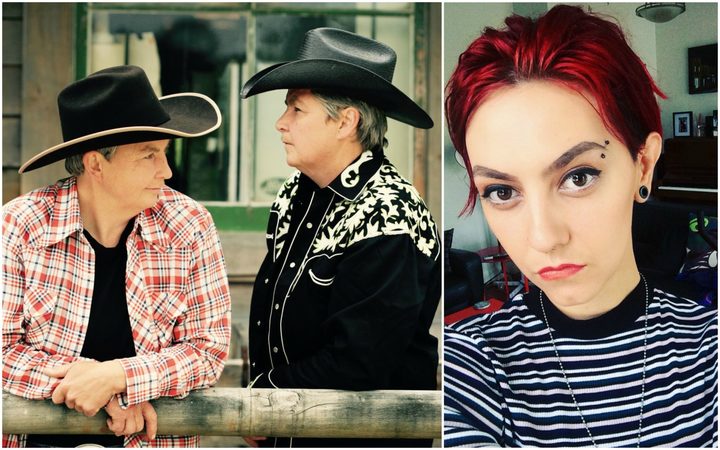 "To be honest, no one really knew what he was singing about, in a lot of ways it was just this catchy tune. Just about every song he played on [Goodbye Yellow Brick Road] had this kind of weird gayness to it: ‘Dirty Little Girl’, ‘Painted Lady’.

"It was exciting colourful music and at that point in time ... Elton John hadn’t come out at all. He was so ‘un-gay’. I think the gay guys probably knew he was gay 'cause he was hanging out with Bernie Taupin a lot.”

Possum Plows | 'Letting It Out' - Openside

“[Identifying as non-binary] was a big thing that I was grappling with when we first started to get a bit more support in the industry.

"It was a big part of my identity, but I wasn’t sure if it was something I should be talking about or putting in my music because I’m in a band and I didn’t want to feel like I may be sabotaging our opportunities by being too vocal or too political and I was quite timid about it.

"But once I did start talking about it and I wrote this song around that time I realised how profoundly that connected with the queer youth fan base.”

Lynda Topp | 'Don’t Leave Me This Way' - The Communards

“It was sort of gay anthem in many ways. I’m not sure if both of them [were] but one of the guys was openly gay in 1985 which was pretty out there... and it was just a good song. A good party song, good to dance to.”

"She’s a Disney star turned gay icon and she has just put her gayness and love of girls right at the forefront of her music. I feel like it’s an indication of how far things have come even in just the past ten years from when I was a kid watching these shows to now, and how accepting we are and how willing we are to have these conversations about sexuality.”

“I chose this song because out of all the songs we do, that song probably changed us the most. Wherever we go people know that song, it just seemed to be the right and proper name for that movie and that song has been with us for such a long time.

“Ezra Miller is in this band, they’re quite new so they haven’t put out a record yet. But he’s quite a high profile actor [and] he’s also been an activist with the queer community.

"He’s non-binary, pansexual identifying like me, which is cool because that’s the part I’m particularly interested in given that there's been a lot of gay representation in music, but less so with trans voices, so that’s part of what spoke to me about this song.

"Also that it’s a political song. It’s written about the Pulse nightclub shooting in Orlando. It’s about the idea of safe spaces and not being made to feel afraid or if you are afraid, just not hiding away.”

“The thing about this one was the production of this song is absolutely magnificent. I think it’s one of the best-recorded songs in the world. Everything is there, but also she’s singing about a woman back in the eighties – Gloria. It just seemed a really cool thing to do. Not hugely political, but if you listen to the lyrics there is a lot going on there.”