Trumpeter and singer Hugh Masekela, known as the "father of South African jazz" who used his music in the fight against apartheid, has died from prostate cancer, his family said on Tuesday. He was 78.

In a career spanning more than five decades, Masekela gained international recognition with his distinctive afro-jazz sound and hits such as 'Soweto Blues', which served as one of the soundtracks to the anti-apartheid movement. 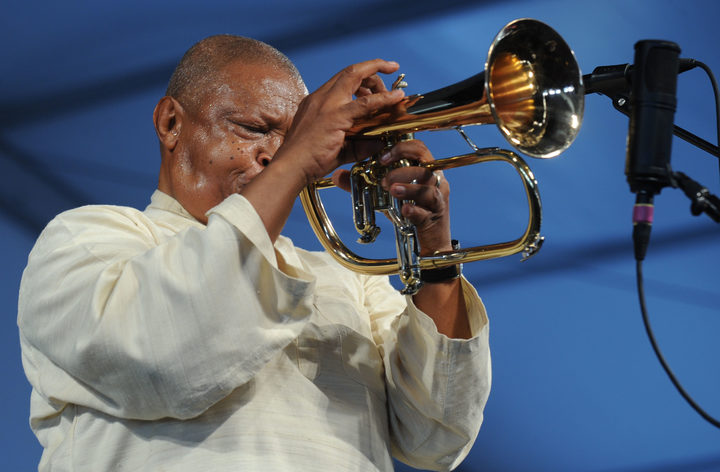 Jeremy talks about that time he jammed with Hugh Masekela

"Hugh's global and activist contribution to and participation in the areas of music, theatre, and the arts in general is contained in the minds and memory of millions," a statement on behalf of the Masekela family said.

"Rest in power beloved, you are forever in our hearts."

Ramapolo Hugh Masekela was born on 4 April 1939 in KwaGuqa township, 100km east of the capital, Pretoria, part of a musical household.

"You know, everybody had a gramophone," he recalled. "My uncle, he had the greatest voice so he sang along with all the records - Count Basie, Duke Ellington, Louis Armstrong."

"When I was 3 or 4 years old I thought that the music where the speaker came out from was a whole world on its own. And that's where I wanted to live and I have lived there ever since. " He told RNZ in 2013, when he last toured New Zealand.

His first trumpet was given to him by British anti-apartheid activist Trevor Huddleston, a teacher at St Peter's Secondary School in South Africa who would later become an archbishop.

A baobab tree has fallen, the nation has lost a one of a kind musician with the passing of Jazz legend bra Hugh Masekela. We can safely say bra Hugh was one of the great architects of Afro-Jazz and he uplifted the soul of our nation through his timeless music. #RIPBraHughMasekela pic.twitter.com/JVy47GA6aU

Meanwhile, Father Huddleston had been banished from South Africa for his anti-apartheid activities. But this would provide Masekela with his next opportunity.

"Father Huddleston... met my idol Louis Armstrong and told him about our band. Louis's response was: 'Well' I got to send them one of my horns'' and he did. What this did for the band was get us on the front page of every major newspaper and magazine in SA - a first for a black group," he told TimesLive.

But things were getting worse for black people in South Africa.

"We knew from when we were very, very young that we were black, and that we were looked down upon by white people, but we were not intimidated," Masekela told the BBC.

In March 1960, more than 60 people were shot dead by police during a peaceful protest in Sharpeville. They had been protesting against a law meant to restrict their movement in white areas.

Masekela again turned to Father Huddleston to find him a way out of South Africa. Eventually, he got permission to leave for London.

"When the airplane finally took off, it was as though a very heavy weight had been taken off me - as if I had been painfully constipated for 21 years," he said in his autobiography.

He would not return for another three decades. But thousands of miles away, he never forgot the struggle of the family and friends he left behind under white minority rule.

His global appeal hit new heights in 1968 when his instrumental single 'Grazin' in the Grass' went to number one in the U.S. charts.

As well as close friendships with jazz legends such as Miles Davis, John Coltrane and Charlie Mingus, Masekela also recorded with the Byrds and performed alongside stars such as Janis Joplin, Otis Redding and Jimi Hendrix at the famed 1967 Monterey Pop Festival.

Still performing 50 years on, he toured Europe in 2012 with Paul Simon to celebrate the 25th anniversary of his classic album Graceland in an African musical extravaganza.

Reflecting on the global popularity of South African artists such as himself, Miriam Makeba, Soweto String Quartet and Ladysmith Black Mambazo,  Masekela said "The South African sound always seems to enthrall people. There is something about the music from here that has a universal lilt that captures people from time to time."

He was married to singer and activist Miriam Makeba, known as "Mama Africa", from 1964 to 1966, and considered her as one of his greatest mentors alongside Harry Belafonte. He cites Makeba for teaching him about the importance of their African heritage;

"Whatever makes you successful, [is] from a community or from a society, and if you enjoy the success of that alone you are doomed. You have to realise without your source you are nothing." He told RNZ Sunday Mornings.

His son, Sal, recalled memories of being dragged around the jazz clubs of Manhattan by his father aged just five.

"He would steal the hearts and souls of innocents with a musical storytelling all his own," Sal posted on his Facebook page.

Masekela's song 'Bring Him Back Home (Nelson Mandela)', written while he was in living in exile, called for the release of the-then imprisoned Mandela and was banned by the apartheid regime.

Though Masekela never considered himself a spokesman for the anti-apartheid movement.

"I've never been in music for the message. I came from the people who use music as an element to make people aware. I am part of 14 million people who said 'No' They sang harder than us. They gave away their lives.

When Mandela was finally released from prison in 1990, Masekela came home.

However, behind the scenes Masekela had his own struggles. He was battling alcoholism and a cocaine addiction he would only seek help for in 1997 - a habit he would later say cost him tens of millions of rands, the South African currency.

South African President Jacob Zuma said the nation would mourn a man who "kept the torch of freedom alive".

"It is an immeasurable loss to the music industry and to the country at large. His contribution to the struggle for liberation will never be forgotten," Zuma said in a statement. 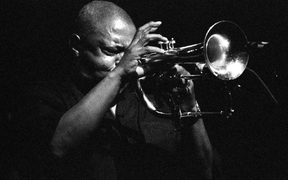