Yadana Saw looks back at New Zealand's history of exposed breasts at music festivals and gives the booby prize to Rhythm and Vines. 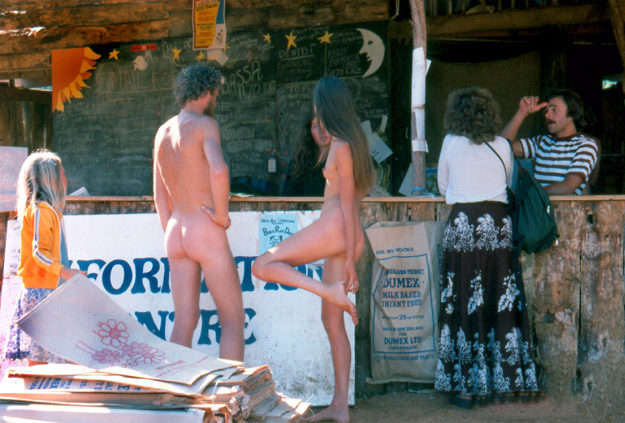 People of Nambassa, at the village market Photo: By Nambassa Trust and Peter Terry - Wikicommons

Usually we look back into the annals of NZ history to remind ourselves of how far we’ve come.

Ladies brought a plate; men drove home after consuming the whole darn crate; a dinner with curry powder and sultanas was considered the height of culinary sophistication.

It was illegal to be homosexual, but hell, it was fine to smoke inside!

And just look at what we were doing at the dawn of NZ music festivals:

"The crowd seemed unconcerned at the occasional topless girl wandering casually among them.

Those queueing for buns and sandwiches at one stall last night concentrated harder on their food than on the teenager wearing only a bikini bottom who joined the ranks."

That's from a 1973 media report on The Great Ngaruawahia Music Festival.

Contrast that to what we've seen since a viral video emerged of a young festival-goer having her glitter painted chest groped by some random dude-brah at Gisborne’s Rhythm and Vines festival.

It's knocked that smug sense of social progress about as far back as Mark Greatbatch hitting a six in the heart-wrenching 1991 Cricket World Cup.

Ah yes, Rhythm and Vines, the annual New Year's music festival that always manages to attract high-quality international and local headliners (even if it the bill is sometimes 90% men). The event that never fails to gift the quiet summer news desks a much-needed reprieve from traffic and weather-related stories.

In 2008, it caused Gisborne to run out of petrol and pies. 2014’s riots had the media swooping down from their usual Mount Maunganui perch. 2015 saw a brave clifftop rescue. 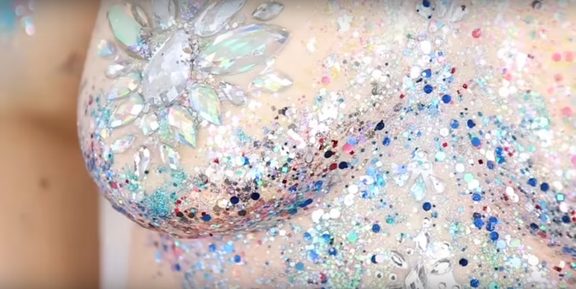 This year RnV has delivered Glittergate, where festival goers were encouraged to embrace and share their natural selves but were instead harrassed by Mr Gropey and his orange hat, who'd forgotten he shoudn't touch shiny round things that don’t belong to him.

It also proved too much for social media: most of the commenters seemed unable to cope with the sight of naked flesh (or naughty, naughty boobies), which is commonplace at festivals like Glastonbury, Burning Man and Coachella.

People might need to get used to seeing glittering gazongas at festivals - it's on trend right now. Instagram is awash with bejeweled breasts, one U.K. media outlet has offered tips on adhesives, and there's plenty of tutorials on Youtube if you'd like to give it a go.

We could certainly take a lesson from NZ forty-five years ago - when you could go naked at festivals without fellow punters or the constabulary batting an eyelid, apparently:

"Police spoke briefly to one bare-breasted mother of two young children as she listened to the music, but moved off without persuading her there was any need to cover up." 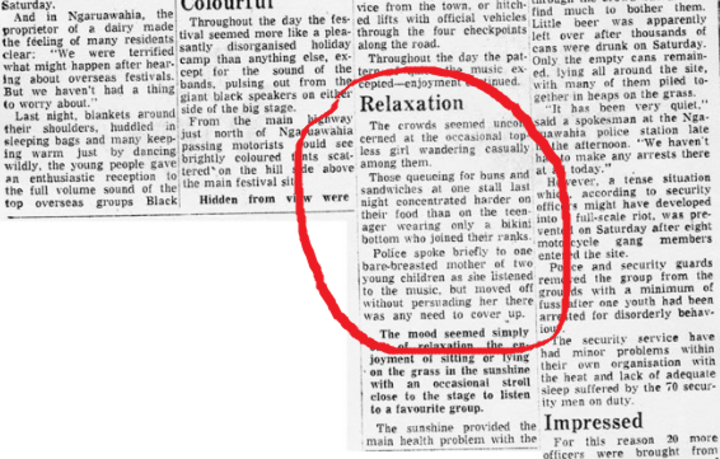 Notice the jarring difference between that, and the way the Herald now covers this sort of thing, with headlines like this:

Because we all need to know what Gable Tostee - the man who was cleared of all charges relating to the death of Wellington woman Warriena Wright, thinks about this particular case.

Rather than publicising a murder acquitted man’s social media opinions, or inviting hundreds of comments on whether visible breasts are dangerous mind-altering objects that render certain people of incapable of common decency, let’s move the discussion on to a more worldly and modern tone.

Like this rad bro penning a thoughtful and informative open letter to Mr Gropey here. His words rekindle the hope that we may be progressing towards an informed and respectful way of encountering other people's bodies.

And if all else fails, let's take comfort in the fact that New Zealanders were once capable of handling a bit of nudity in the name of being free and having a good time.