The return of Salmonella Dub: a festival story 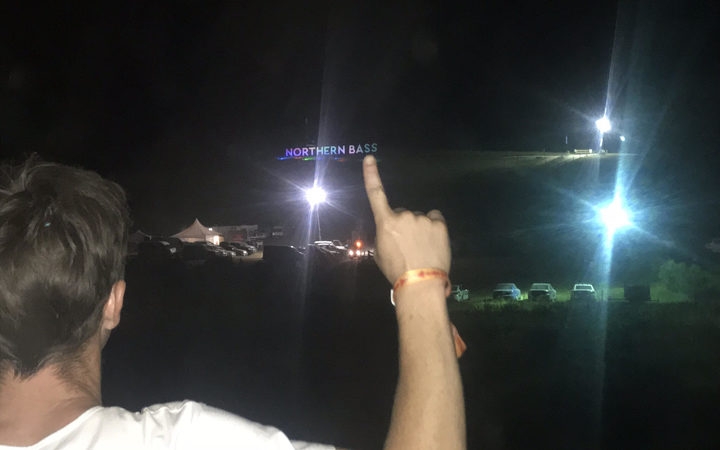 The author pointing out the obvious. Photo: Kirsty-May Lillis

I expected carnage as I arrived at Northern Bass on New Year’s Eve.

It was already day three of a three-day music festival and I know how these things tend to go.

Normally by this stage of proceedings, half the toilets have stopped working and there are bodies littered around the campground in drunken comas adding sunburn to their future woes.

By contrast, the Mangawhai festival site was operating smoothly, staff were in good humour, the young crowd seemed well in control of their highs and there didn’t seem to be the human debris typically associated with summer festivals.

(Full disclosure – I was allowed in the staff entrance but I heard the queues at the main gate were several long, hot hours long.)

I was sceptical because all I know of the big mainstream multi-day festivals in New Zealand are the nightmare stories of feral behaviour that are always in the news this time of year. About women getting harassed. About violence. I hate environments like that so I’ve always avoided the scene. 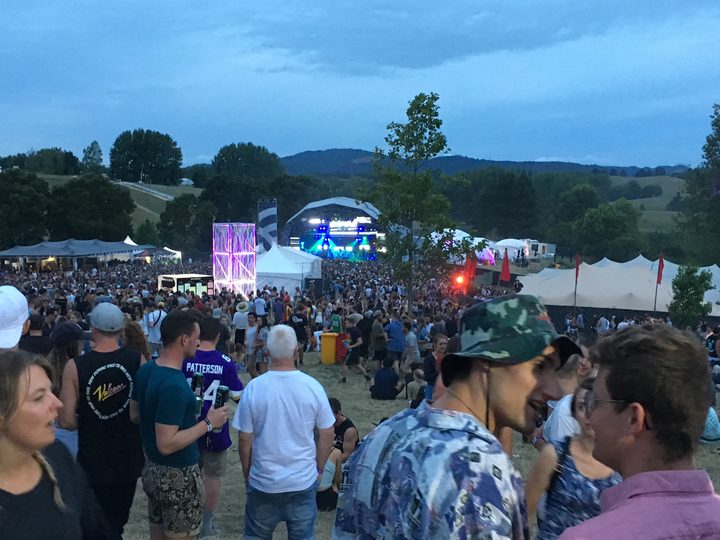 Salmonella Dub from right up the back Photo: Alex Behan

But I saw nothing like that at Northern Bass. I saw people cavorting around in happy bubbles, dressing up (or down) together, dancing like maniacs and being really nice to each other.

I made several new friends, I saw a couple of people I haven’t seen in years and shook my ass with a bunch of happy strangers fizzing to see in the New Year.

I was 15 in Christchurch. Back then, Tiki was their live sound engineer. They played a free show at the Bridge of Remembrance and I've been a dedicated fan since.

It’s not just me Salmonella Dub had a big impact on. They are one of this country’s most influential bands and this year celebrating 25 years of being together with three shows, the first at New Year’s Eve at Northern Bass.

When I arrive at four the sun is beating down on the dancefloor. Crowds are strangely thin for (drum and bass MC) Tali and UK drum and bass DJ Digital on opposing stages.

Some of the day-trippers were still arriving, of course, but for a sold-out event, I had a problem working out where everyone was hiding at first.

Apparently, they were hiding from the sun and putting on festivals glad rags, because by the time Ladi 6 took the main stage, hordes of happy hedonists were pouring into the two main dancefloors.

Everyone seemed clean, surprisingly fresh and roaring to let loose.

Ladi 6 nailed every note and utilises the prodigious sound system to maximum effect (the sound on both stages really was very good).

Her infectious joy and well-loved setlist had the crowd singing and moving to every beat and she invited up MC Silva who added an extra burst of energy.

It was a crowning moment in a festival line-up that stood out this year for its inclusion of an exciting new wave of local female performers.

Rapper Jess B was another highlight, playing several sets across the three days and gathering much love and respect.

(Full disclosure – I wasn’t there for her sets. This information is gathered from dancefloor gossip and social media, therefore hearsay). 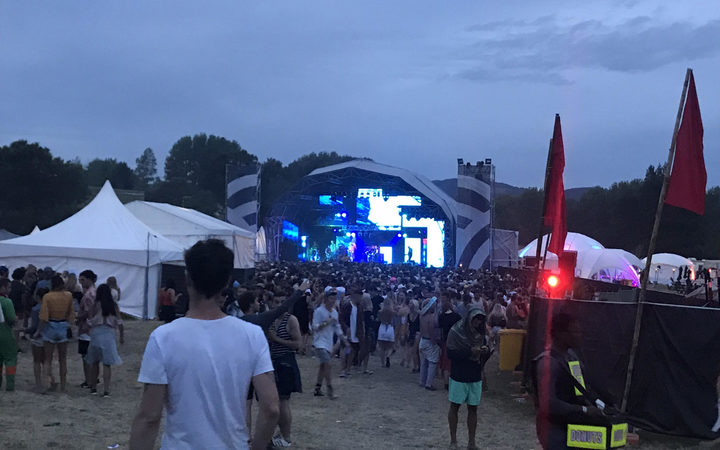 In this context, I am considered an old Salmonella Dub fan, I’ve been listening to the band longer than many of the crowd have been alive.

But the younger ones know all the hits and I found myself thinking about how bands’ legacy gets passed on to new generations.

When ‘Love your Ways’ breaks out four or five songs in, it’s clear and beautiful to me that this band, with these songs, have become deeply embedded in our culture.

By the time Salmonella Dub took the stage, the full sold-out crowd were primed and pumped and the band played a crowd-pleasing set that included something for all fans young and old.

'Love your Ways', 'For the Love of It', 'Problems', 'The Bromley St Roller' – it’s hard for me to imagine these songs and this band becoming so vital to a population in any other country.

I just can’t quite see the British or American audiences having the same love for a group of dubbed-out socially and environmentally conscious bass-heads. Not the same level of widespread acceptance.

It’s not only the music but also Salmonella Dub's ideals that New Zealanders buy into, that gives them their longevity with fans.

Salmonella Dub have always been culturally and globally aware, they’ve always put authenticity first in their art and have never separated music and message. This is a band who turn down Hall of Fame status for reasons of integrity.

As my mind starts to go down this path, watching the crowd shake loose a year’s worth of collective restlessness, the band announced they were going to take us back to 1993.

Most of the band peel offstage, including Tiki – the dynamic frontperson who’s been performing with the band since 1999's Killervision, the album that produced their breakthrough commercial hit ‘For the Love of it’. 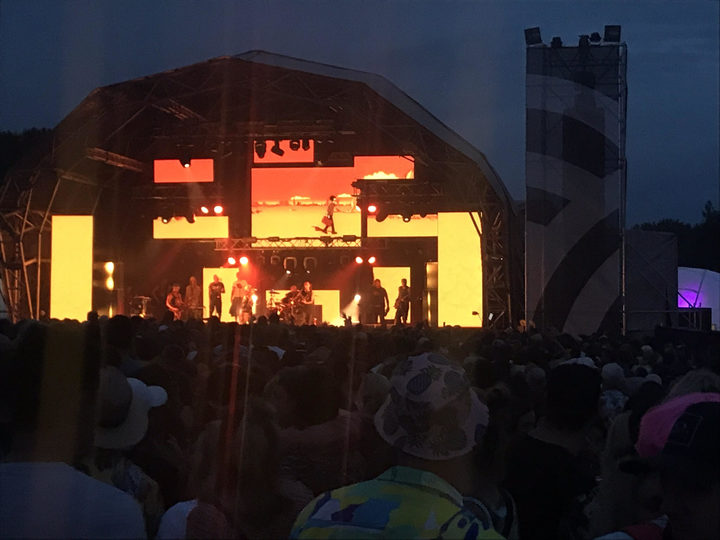 As close and blurry as we got to Salmonella Dub Photo: Kirsty-May Lillis

Now it’s just the original three members and they launch into a tough, solid groove, rockier and heavier than the more polished, smoother cuts of later Salmonella Dub.

The crowd go along with it, they may not have heard the early song but it doesn’t matter to them. The beat is hypnotic and addictive, the sound system is finely tuned and the band are tight. Really tight.

It’s easy to see how these three guys went from jamming together in Christchurch to the giddy heights of international success.

It then occurs to me that Salmonella Dub were the first band in my generation who brought dub to the mainstream in New Zealand.

If they hadn’t infected us so young, would The Black Seeds, Fat Freddy’s, Trinity Roots or Shapeshifter have gone on to the success they've had?

Salmonella Dub opened a door for those bands by normalising some pretty radical dub and combining it with New Zealand values that stood the test of time.

They’re a band who never compromised themselves and have therefore continued to inspire musicians and the music community long after their peak commercial success.

The following two scheduled shows for the reunited Salmonella Dub are in Taupo and Christchurch over the next few months (both with Ladi6 supporting). In particular, that hometown show will be quite special. 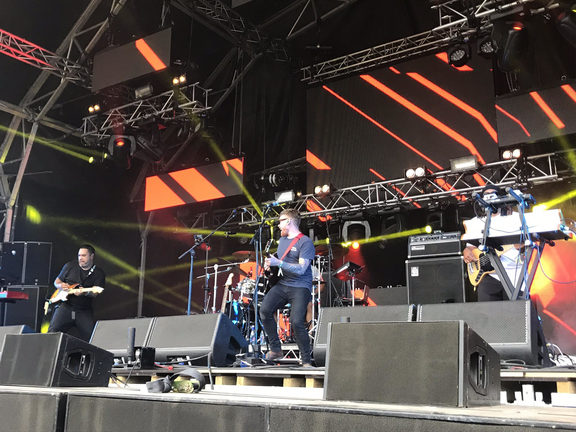 After Salmonella Dub, the Main Stage at Northern Bass gets predictably raucous for Shapeshifter and Pendulum and I find myself wandering off for something a little less in-my-face.

I stumble across the London-based DJ Swindle on the Jungle Stage, someone I’ve only ever vaguely heard of and find myself very happily getting tricked and teased by his slinky manoeuvres.

It’s always nice to see a DJ who understands connecting with a crowd. A well-mannered, but still going ‘hard as’ crowd.

On my stroll back to camp I gaze at the colourful arrangements of well-maintained campsites and realise that not only had all the toilets been working and clean and not even gross, there were also showers.

So at 3am, I took a perfectly lovely hot shower with very acceptable pressure, thank you very much. No wonder everyone looked so fresh on day three of the human dance puddle.

This festival lark ain’t what I thought it would be.