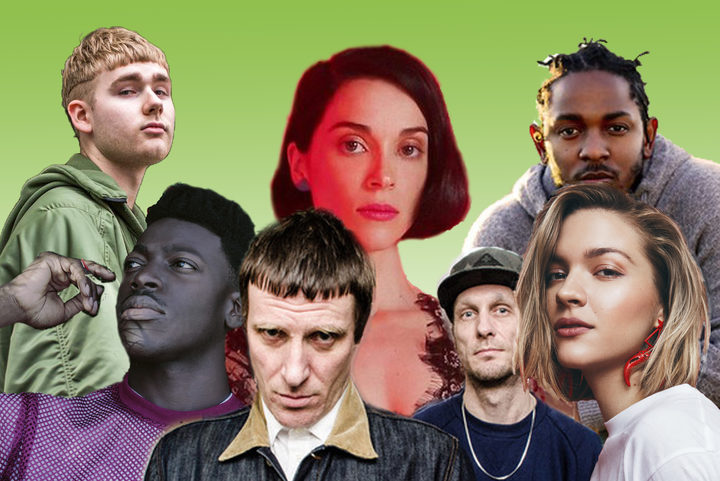 We've talked about some of our favourite NZ albums of 2017, and now sharing some of our picks of favorite music from elsewhere is Kirsten Johnstone (KJ), Alex Behan (AB), Yadana Saw (YS), Nick Bollinger (NB) and Tony Stamp (TS)

A pop confectionary from a Swedish Pop Idol runner up, the joys of this track lie in its (deliberate) imperfections: a slightly detuned acoustic guitar here, an abrupt burst of distortion there. The pre-chorus builds to a sugary crescendo and just when it starts to feel overpowering, it all drops away, honing in on the beat and a semi-chanted vocal.

Undercutting expectations by aiming for restraint, it's cool but not distancing, and when Tove sings "say my name - wear it out like a sweater that you love" it's gorgeously romantic, in an endearingly English-as-a-second-language kind of way.

I liked a lot of songs in 2017 for a myriad of different reasons. With this song, it's really simple, it just grabbed me by the feels from the start. The opening line "I remember when I first noticed that you liked me back" viscerally brought to mind the moment of vulnerability we all have when we're harbouring a secret crush. If you do like the song, I highly recommend the self-titled album. As singer Greg Gonzalez described to me in our interview it is a thing of deliberate heart on sleeve romanticism. The lyrics, the pace and even the chords don't vary much throughout the record, but it quickly became a favourite for those intimate, reflective or sensitive moments for me this year.

Sitting somewhere between Radiohead and Roy Ayers, Moses Sumney is just as at home supporting Sufjan Stevens as he is Solange. His voice is agile, swooping from bass to falsetto registers, vulnerable and powerful at different times.

He spent time growing up in both California and his ancestral home of Ghana, and as he's said in interviews, feeling like an outsider in both places.

Produced by Nigel Godrich of Radiohead, Aromanticism is Sumney's first full length album. He didn't rush into it, taking his time to get to know what his sound is, and constructing a careful narrative, seeking to "interrogate the idea that romance is normative and necessary."

It's a pretty gentle album, great to have on in the background, but as a headphone album you can hear how richly it's orchestrated - harps, dinky casiotone beats, jazz keys, flute pads, thumb pianos, and horns. I can't wait to hear what he does live at Laneway.

Sleaford Mods are a duo: beatmaker Andrew Fearn and vocalist Jason Williamson. Their name is a geographical pointer - the pair hail from Nottingham, and Williamson delivers his torrent of words with both humour and bile in the working class vernacular of the streets he grew up on. This latest album, English Tapas, seems to have been largely written post-Brexit, and Williamson, for all his identification with working class frustration, leaves no doubt as to where he stands, comparing contemporary Britain with the British Home Stores chain - BHS - which went into liquidation just before Christmas leaving thousands jobless while the CEO sailed on his yacht.

Mura Masa is the performing name of 21-year old Alex Crossan who hails from the remote Channel Islands of Guernsey.

His pastiche production style is like a form of musical hyperlinking. Think of his music not as a disparate collection of open browser tabs, but rather a coherent and accessible interpretation of current musical styles that can sometimes feel difficult to digest.

Mura Masa takes the seemingly-impenetrable trap music, or the dinky-robo-pop of millennial songbirds (Charli XCX, Nao and Bonzai), and fuses it with the comfortable and familiar (hat tip to Damon Albarn guesting on the album's closing track).

In the typically self-aware way of his generation, Mura Masa samples himself (2015's Lovesick F*ck) in this track which features A$AP Rocky, and showcases the sonic embellishments of 2017, marimbas, steel drums and thumb pianos. Turn this up, grab a frose, and snap a selfie with your pals!

What even was 2017? Weinstein and the #metoo movement. Trump Year One. Fake news about fake news. The noise is overwhelming. Humble is THE song of 2017 for me. An instant classic. Within the context of 'Damn', Humble serves as Kendrick's mantra to himself.

And in 2017, a year in which mansplaining has run rife many of us would also be well served to repeat the chorus and "sit down, be humble".

That refrain can get stuck in your head for days but it's not even the best lyric. In a world where image is everything, Kendrick is taking a stand.

Kieran Hebden has been making warm, organic electronic music as Four Tet for nearly twenty years now. Having escaped labels like 'pastoral' and 'folktronica', he still uses a similar palette of sounds, employing instruments that are plucked, hammered, or bowed alongside more traditionally 'dance' elements like synthesis and vocal samples.

The jazzy shuffle of Scientists centres on a quietly volatile synth arpeggio that moves through various permutations, revealing a verse-chorus structure on repeat listens. It gently builds to a final crescendo featuring brass and female vocals, and by the end your heartstrings will be thoroughly tugged. Plus you can dance to it.

Dark Matter, the first album in nine years from Randy Newman, begins at a fictitious conference where a selection of scientists, theologians and other supposed experts are about to have a face-off over some of the great questions. Evolution. Global warming. Dark matter. The song serves as a kind of overture to a classic Newman album which ranges from the laugh-out-loud funny to the kind of song that captures the human condition so poignantly it could make you weep.

St Vincent is Annie Clark - is a New Yorker who has been a darling of indie music since her first album Marry Me 10 years ago, and while she has always had a fervent cult following, she's never really had mainstream recognition. With the slick highlighter marketing of Masseduction I wondered if it was a breakthrough.

Produced by Jack Antonoff (Lorde, Taylor Swift) she's pared back the songs to only keeping in what really needs to be there. But then the liberal swearing and risque subject matter, from kinky dress ups to suicide, mean that there's no way commercial radio will touch it.

Like Lorde's album it's deeply emotional, witty, moves so well through moods and tempos through the album, and creates real intrigue about the person behind the music. It's subversive, smart, brave and adorable.

KOKOKO! are a musical collective that hail from Kinshasa. In the midst of the economic and political turmoil that has beset the Democratic Republic of Congo, here are a band that have literally taken things into their own hands.

The instruments you hear on this song are made by the group from found objects. The pulsing bass note is a one string biscuit tin guitar where the body is a infant milk formula tin. Percussion is a broken typewriter that hits a tambourine, or a set of water-filled bottles; and a talk box made from a repurposed car cassette stereo.

The result is a driving, trancy dance number that will transport you to an imaginary NYC warehouse party with ESG and the DFA Records stable sharing the bill with these Congolese groove-magicians.

Here's a spotify playlist of these songs and many more we've loved this year. Merry Christmas.