The Staves on recording with Bon Iver: 'It was the most fun we've ever had '

The Staves are three sisters from Hertfordshire, England whose ability to harmonise impressed Bon Iver’s Justin Vernon so much he took them on tour, recorded their 2015 album and helped set up a new collaboration with New York-based chamber sextet yMusic. 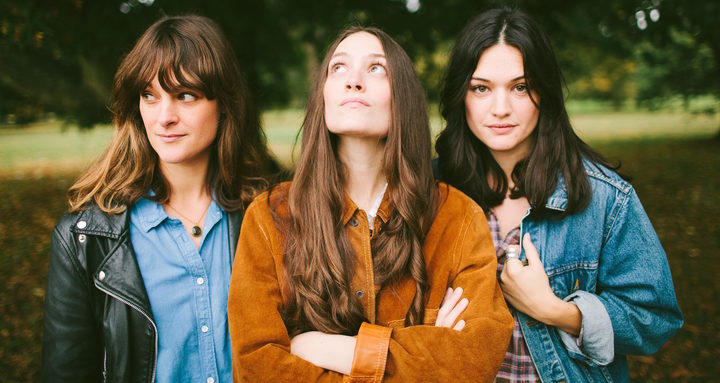 The Staves’ youngest member Camilla Staveley-Taylor says a lot of people are shocked when they first meet the sisters. They’ve got foul mouths and aren’t what people would expect from a trio of sisters who make rather gentle folk music with beautiful vocal harmonies.

“I think people saw long hair, a family band, and girls. Vaguely kind of folk-ey singers and that we sung together sweetly. So I think everyone thought we were kind of … sisters that sit around braiding each other’s hair all the time, speak in hushed voices, who never swear, who’ve never drunk beer in their lives.”

The sisters have been singing together for as long as Camilla can remember: “I kind of can’t really remember the first time we sung together, or hearing them sing … I can’t remember when that didn’t happen. It was always very natural to us, and there was always music on in the house.”

The sisters grew up on a steady diet of music including The Beatles, Mowtown, Neil Young and Simon and Garfunkel.

“I think we always associated having a sing with having a party, and it being a social occasion, because that’s what we’d do, we’d have friends over and the guitars would come out, people would drink wine and sing together.”

“You already know how horrible each other are, so there are no surprises!”

The Staves’ latest offering, The Way Is Read is a collaboration with yMusic – a New York-based chamber ensemble

The two groups met when Justin Vernon of Bon Iver commissioned them to do a set together at the festival he puts on in his hometown of Eaux Claires, Wisconsin. The groups enjoyed the collab so much they decided to record it.

Justin Vernon has been a big part of The Staves’ musical career: he produced their 2015 album, which involved the trio living in his home in Wisconsin for about a year.

“Definitely making that album was the most free we ever felt. Sometimes when you go into the studio with people, they maybe have an agenda of putting their stamp on what it is that you’re making … whereas he was just like, ‘I want you to make it exactly how you want to make it sound.’

“All his suggestions we really liked, and he gave us a lot of freedom to just do what we wanted – no idea was too silly … there was no inhibitions, which is so, so important when you’re in the studio and you’re experimenting with stuff. It was just the most fun we’ve ever had recording.”

The Staves perform at Auckland City Limits on Saturday, March 3rd at 1.30pm on the Tamaki stage.