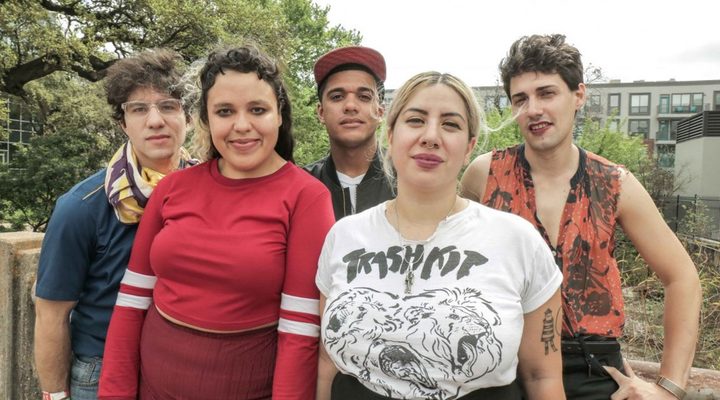 Two disgruntled hotel workers in Rhode Island with a shared interest in workers rights and labour union activism quit their minimum wage jobs and became one of the most exciting bands in the U.S. Jana Whitta chats to Joey La Neve DeFrancesco and Victoria Ruiz.

Where did you two meet?

V: We had met each other a couple of months before when we both worked at the Renaissance Hotel and were labour activists there. So that’s how we met. Through labour activism.

Often when you’re an activist or politically inclined it’s hard to narrow down which cause you’re really passionate about, but in terms of your music what issues would you say you focus on the most?

J: Yeah, I think that's a really hard question and I think depending on who in the band you ask you’re going to get a different answer. [The] songs ... on this record were written over the course of a couple of years and ... weren't written one song one month and another song the next month, they were all happening at the same time and evolving. 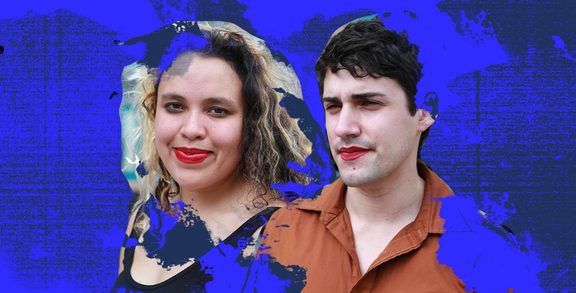 So I think there’s a lot being put into each song and there’s a lot of subtlety and a lot meaning in all of them, but ... certainly we’re talking on this record about borders - both literal borders and the borders we put up within ourselves, and between each other and all of those walls, and needing to tear those walls down.

I think that message comes out most literally on ‘A Wall’, but it’s certainly something I think about in a lot of the songs. A lot of them are about trying to dismantle white supremacy and the police state and that’s been a common theme throughout our catalogue ... The last record was written entirely pre-Trump ... and has all these connections and amplifications of our present moment.

I was reading an article that said a lot of people listening to Cost Of Living, your new album, assume that it is about Trump because it’s come out now and it seems timely, but people have been fighting these causes for years and it’s just now that Trump’s in power it’s become more mainstream. What are your feelings around that?

V: Yeah, I think that’s what’s a blessing and a curse about being an artist and having a platform where you are actually reaching people. Everyone feels that because your music is part of a news cycle that it’s just suddenly appeared and it’s hard to see all of the time that goes into creating the songs.

But then also, when you're an artist that's calling upon your own personal experiences, it’s literally your life - but you’re finding context with other people and you’re seeing how you’re not alone, you’re part of this more collective power and collective energy.

I read this article in Bitch magazine asking if Teen Vogue is profiting off of ‘wokeness’, like profiting off of speaking about these political things, and I kind of always feel worried that we may be read that way, but then I have to remember that’s just a fear, because my actual work and where I’ve actually put my actions has always been fighting these things and believing in these things, and failing.

Like, you can’t win them all. You can’t do everything. You can’t fight everything. It’s impossible. But being dedicated and being intentional and kind of seeing that music is a vessel for many different things, including confronting hegemony.

So as long as music is your vessel and you’re about music’s vessel then you haven’t sold out and you're using it as a tool. And it can constantly be redefined and reworked and there’s always a space. You're always on a spectrum of fighting power.

Do you feel that your audience has grown since Trump and people are trying to find more vices to get more politically active?

V: I think it’s really hard to answer that question because everyone’s relation to Donald Trump, and the disease of capitalism and racism that he's a symptom of, is different.

And so I think a lot of our fans hopefully find moments of catharsis and find moments that recognise and affirm their rage and their desire for justice and these kind of simultaneous emotions. I think that our music is reaching people who need that right now and we’re part of a lot of musicians and artists and people who are creating a space to hold all of the almost contradictory emotions that we feel right now in this country.

And then I think also there are a lot of our fans, especially coming out of a punk scene, who are so desirous of anything to hold on to. Right now it’s sort of like people are in a locked house that’s on fire, and so either you mobilise to pull the door open and get out or jump out - and you try to find something to hold on to.

I think that we’ve seen this time and time again throughout history, but women, people of colour, people who identify as non-gender binary end up being the things that people want to claw at and to hold on to trying to find some sort of answer.

So I think also a part of our fan base may be tempted to find out everything bad about the band; what’s wrong about the band, is the band selling out, is the band doing enough? They’re kind of putting a lot of expectations on us because we’re the closest thing for them to hold on to.

This is sort of one of the curses of any kind of clique or scene or group of people that becomes insular and an echo chamber, that you want something to hold on to when times get tough. So I think that for a lot of people and for the majority hopefully, we are providing some sort of landing ground for a lot of the emotions and a lot of the terror that we’re feeling on individual and collective levels.

Then I think we’re also experiencing the growing pains of being a band that is on a bigger record label, has PR people setting up interviews just like this one and having to be part of a context in a world right now that’s in a lot of pain. And sometimes it’s hard to find collective power in that.

So in a way signing to a relatively major label, Sub Pop, that would help spread the message through their following and distribution…

V: Definitely. Which is what they've done. Working with them has been really incredible. Everyone knows the music industry is not what it was 20 years ago, and what they do is they help push you out of any kind of echo chamber and kind of give you a very small sailboat to navigate a giant ocean which I think if we’re going to be any sort of threat to power that is what has to happen.

I wanted to touch on your musical influences, I hear a lot of early punk like Crass, Dead Kennedys, there some X-Ray Spex with the saxophone in there. I’m sure you get these comparisons a lot. I read that one of your biggest influences is Sun Ra...

J: Yeah, we listen to all sorts of different music. A lot of jazz and especially bebop era until free jazz zone, where people were doing things that were very out there artistically and giving it an explicitly political message, at the same time that a lot of music around them was really extraordinarily conservative.

We like to give The Beatles all this credit for being these great innovators and attaching politics to their music in the late sixties, but like 10 years earlier there were black jazz musicians doing things way beyond what they [The Beatles] were doing tonally.

Who influenced them, as well…

I think they made some of the most inspiring music and inspiring political cultural work that exists, in the last however long, hundred years. So definitely when we were starting the band, we had the saxophone and some people see the saxophone and think ‘ska’ or something, but much more what we were thinking about the saxophone was that passion and exploration and radicalness that resembled what Sun Ra was bringing to music.

Describe a Downtown Boys show for listeners who might want to come along. What could they expect?

V: This is a good question. A British interviewer asked me a similar question and he was like, “So much of your intro seems so based on your politics in the United States. Do you think that the crowd is really going to understand?”, and I was like, “I don’t know” [laughs].

We live in a way more globalised world, when you talk about power it’s always a learning process. I don’t think we’re going to be like foreign aliens to people coming to the show, but I think people can expect us to be just as excited and nervous, and also trying to figure things out - as they are.

I think that we want to be able to bring people the energy and the music that we’ve worked really hard on. And I think people can just expect us to be bringing our truest selves and we know that we’re one band, we’re five people, but we’re part of a bigger context of music and of musicians who have travelled to different places in order to have a connection with people who want that music. And we want to be part of that tradition.