New Zealand artist Dick Frizzell reflects on his life and talks us through five of his favourite songs – which all happen to be homegrown. 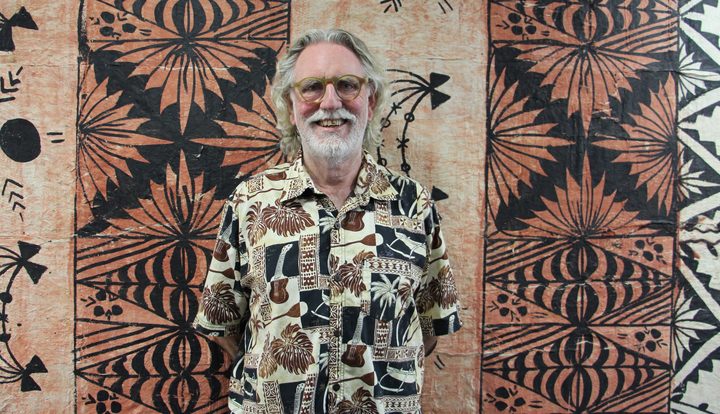 Frizzell grew up a quiet, slightly nerdy kid who liked to draw, he says.

At primary school in Hawke's Bay, kids would queue up to have him draw Mickey Mouse and Donald Duck on their schoolbooks and he spent hours in his bedroom copying comics.

At his school, a boy's character was defined by whether or not he was into The Phantom, he says.

"All the naughty guys read The Phantom and all the head prefects and stuff read Eagle and Roy of the Rovers."

Dick's dad worked at the freezing works and Dick was working there as a 14 year old when rock'n'roll happened, he says.

He was roller-skating around the house and the kitchen window flew open.

"Mum stuck her head out and said 'Richard, Richard, come listen to this. This is this new rock'n'roll!'. And I clomped into the kitchen and stood in the middle of the living room listening to [Bill Haley's 'Rock Around the Clock']. I thought what the hell is this? It's not for me."

Dick's mum was into music and even performed in an all-female skiffle band.

"They had half a beer bottle with tissue like a kazoo and a broom with beer bottle caps nailed to it that you bang and a tea chest bass, Mum playing the stupid kazoo… (Laughs)"

It was his mum who encouraged Dick to "be arty".

"Dad was terrified of the whole idea. He thought I was going to be a 'poofter' as he called it.

"Because I could draw and belonged to a tramping club and was good at maths they thought I'd be a surveyor. I thought 'No thank you'. I deliberately failed School Cert so I could take art the next year."

Dick met his wife Jude at Christchurch's Elam Art School in the early sixties and left there with a family.

He went to work in advertising – at an animation studio for three years.

"[Animation] is about the only thing I've learnt to do properly. Everything else I've just figured out."

His philosophy of treating all objects equally has its roots in that time.

"One day you're advertising potato chips, the next day Fiat cars … you give it the same level of conceptual concern, no matter what it is.

"When I walk through a supermarket I feel like van Gogh walking through a wheatfield … I look at everything democratically."

The image Dick is perhaps best known for – 'Mickey to tiki tu meke' – was a little idea that he popped out for a child cancer auction in Wellington that he didn't think anything of at the time.

"I just liked the idea that the shape of Mickey's face was the same sort of the shape as the face of a tiki."

He turned it into a lithograph three years later at Jude's suggestion.

The response to 'Mickey to tiki tu meke' was "double-barrelled" he says.

The young artists he knew through his son Otis welcomed it – but academics and filmmakers did not.

"Oh Jesus, I was the scum of the earth. A 'spiritual assassin' someone called me."

He "bolted" on a six-month sabbatical with Jude, but was prepared to argue his case, he says.

"If you get an impulse that makes you quiver with excitement, whatever it is, you have to do it to find out why it feels so exciting. There's always a reason. In fact, there's a reason you should be able to articulate.

"If you start ring-fencing a culture and saying 'This is how we like it, let's keep it like this' you might as well just bury it."

Dick says he wears his references on his sleeve.

"No matter how much you explain yourself you can never get rid of the mystery. In fact the more you explain, the deeper you go, the more interesting it gets. My success is totally predicated on this notion of full transparency."

"Prior to this I was just like 'Dad', you know, didn't like it all. Then I heard 'Burntime' and I went 'Oh, this is pretty good'.

Otis and Rhythm Slave made costumes for the video at the Frizzell home, he says.

Dick designed the cover of their 1991 album What Can We Say to the brief - "make it fruity as hell".

"Songs like that, you think 'why didn't they go global?'

"I heard them up at the Peter Pan Ballroom. They sounded light a bought one. The complete package ... That should have been a worldwide hit."

"It was so dynamic. When you heard it you thought 'Whoa, where's this from? This can't be from Grey Lynn or whatever!'.

At a party, Darcy told Dick he was mystified himself. He said "I'm so sick of people going on about it. I don't know what to say to them!"

"It's a wonder they weren't bigger than they were. And you look at the vid for 'Trippin'. The whole thing about singing is being unself-conscious and letting go and just doing it. And boy oh boy, they sure did."