Martin Phillipps of the Chills shows us Dunedin's historic venues

Martin Phillips of The Chills revisits the iconic venues where the 'Dunedin Sound' came to life. 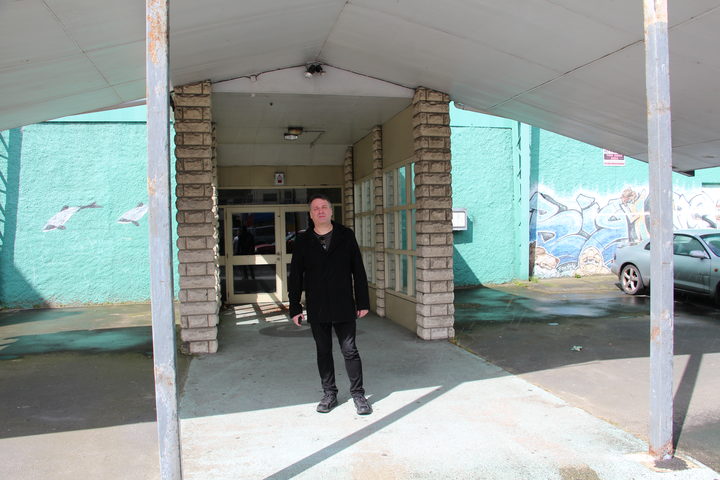 “Sammy’s is one of the larger venues. It’s an old theatre. There’s debate now about what it’s going to be, everyone wants to keep it because it’s quite special.

"I think it used to be His Majesty’s or something. It sort of became the focus of the Dunedin Sound bands, particularly those who were on big tours.

“It would be really hard to recall all the bands that have played here, but we had some pretty big bands like Faith No More and stuff and lots of the Dunedin Sound bands and Flying Nun anniversaries.

"There was one that was broadcast live on a station in the United States who had flown out especially for it. It used to have an immaculate, beautiful Victorian or Edwardian frontage on it. There has been talk of replacing that.” 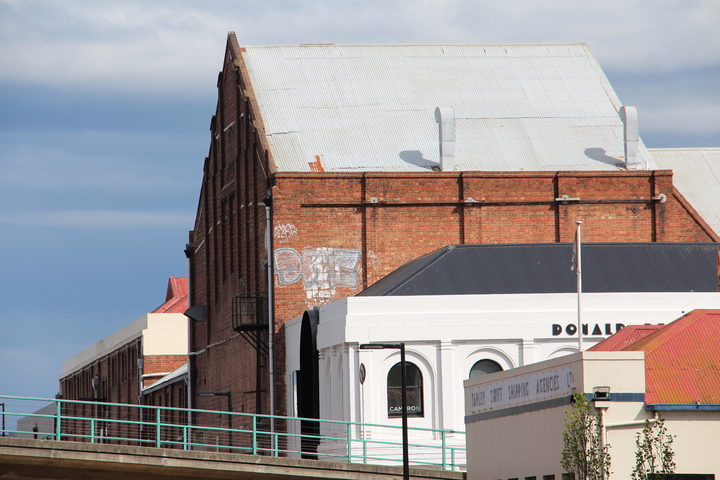 The room in which 'Pink Frost' was born Photo: Darryl Stack

“Just round the back of Sammy’s, on the corner by the overbridge, on the second floor, the end two rooms are the practise rooms we had where Terry Moore, Martin Bull and myself first practised ‘Pink Frost’ one morning.

"I’d written it the night before, the bulk of it, and we just ploughed through it and we knew we were on to something very special right from the start.

“The night I wrote ‘Pink Frost’ it just really did flow through me, you know, I felt like a conduit of some sort. First came the music, then I realised I had to have a suitably creepy kind of lyric. I still think [the lyric] is kind of hammy but I was only seventeen.

“Then the next morning just mucking around and we were really communicating well at that point. We very quickly came up with the two little intro things based on ideas of Terry Moore’s.

"So it just came together and I think we played it two blocks away at the Empire Tavern that weekend for the first time.” 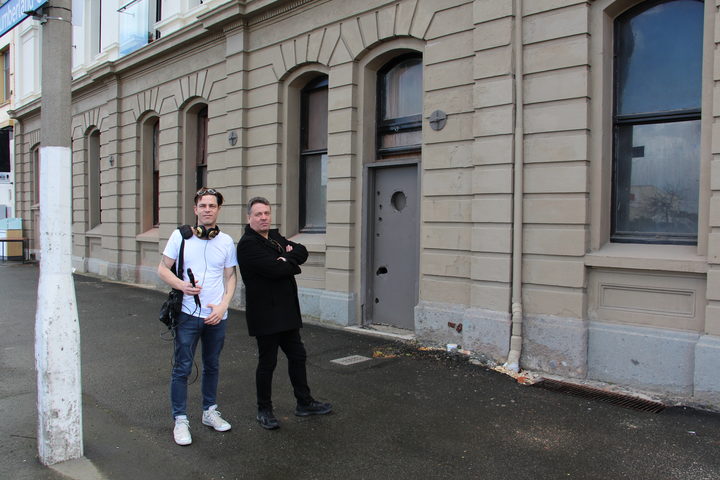 Outside what was 'The Pitz' Photo: Darryl Stack

“Behind us, under the ground, there's what used to be The Pitz, which I think became Pharaoh’s Tomb. This is mid-to-late-eighties into the early nineties.

"It had a low roof and concrete walls, it was incredibly loud. Not a very nice venue but it was about the only thing going for a while.

“Notable mainly because it covered the period of the end of the initial Dunedin Sound and the rise of the new ‘Oi’ kind of audience. There was a lot of friction, a lot of violence.”

“The people who had been there for early punk stuff and were now exploring more New Wave stuff that was coming out of Britain and the people who were onto their own kind of GBH exploitative kind of music.”

“They were not always eye-to-eye about what should be happening here. So it was an interesting venue always fraught with tension. 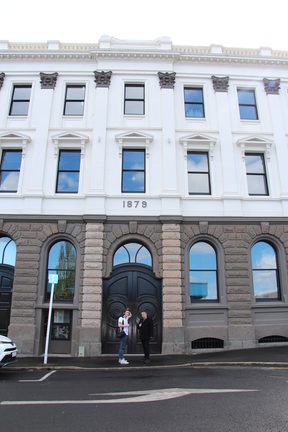 “A little further up the street is Chippendale House, one of the main early attempts at a collective art centre, to the extent that they’d have touring bands play there.

“The first time The Chills came back with my Auckland lineup we played there. There were knives being sharpened, you could hear it on the motorway on the way into town. They blew them away and we all became friends after.

“Unfortunately most of the collectives were run by people with hearts of gold but not a lot of financial wisdom so a lot of them just fell apart and left with the wrong people owing money.” 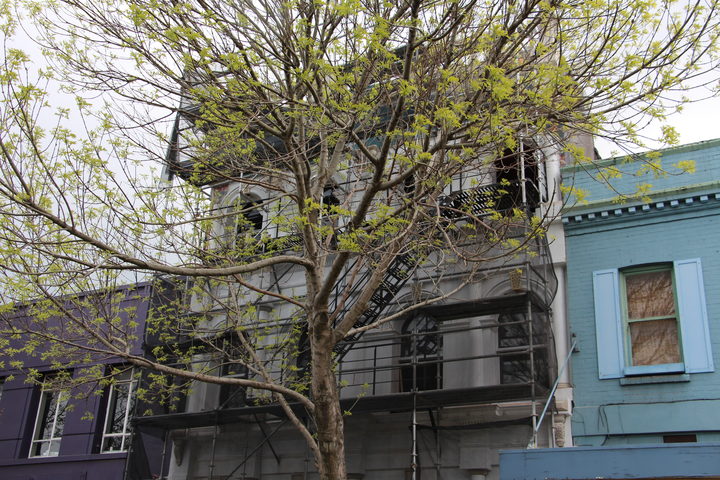 “Just up the road from Sammy’s, is The Empire Tavern, which I guess is internationally known as the heart of the Dunedin Sound as it developed during the eighties right through the nineties. John and Maureen ran it and they just loved having the young people around and all the music.

"It’s finally being redone. There was a good chance it was going to get torn down and it’s been saved.

"They've got these little shelves basically wide enough to put a pint of beer on, lining the walls. I’ve seen at gigs where people were standing on those and a room that was probably meant to hold 80 people had maybe a 160 people easily crammed in, the floor rocking as The Clean played or The Verlaines.

"Every combination of Dunedin bands will have played here, literally as Roy Colbert said, ‘with a piece of paper in their left hand from the song they’d written the day before’.” 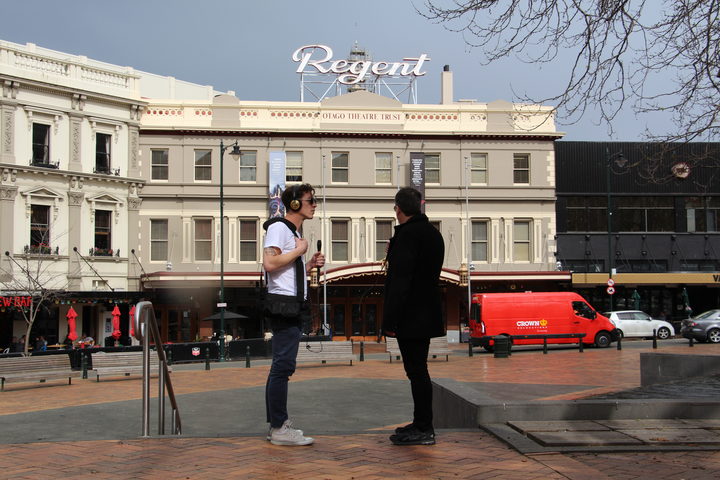 “The Regent has been really important for Dunedin in terms of the international acts that came through. Lou Reed, Talking Heads, The Cure, The B-52s, all those acts played here and everyone would come out.

“On the first and second floor there were practise rooms during the eighties, there were a lot of small office rooms … they were all little sewing companies and things.

"Then at night you’d practise until somebody would come up and bang on your door and let you know that in fact there was a classical music concert happening in The Regent and ‘Did you not know that your back wall is actually the back wall of the theatre?’

“They shouldn’t have told us that, because we then worked out that the little fire escape door at the back led out over the roof onto a door which they had to leave open during concerts for fire safety reasons.

"So from then on concerts were free … I’m not sure if I should be telling you this.” 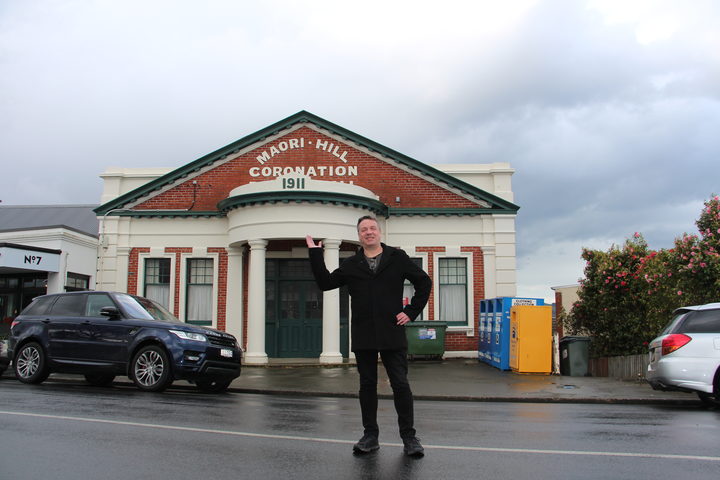 “Coronation Hall is important because, well, first of all, I saw The Enemy only twice and the second time was here. I remember they had their door takings stolen that night.

"It was [also] where The Chills first played spontaneously ... at a Bored Games/The Clean gig.

“This is one of the two or three places I talked about where the so-called bogans forced their way inside just to beat people up. By that stage, we were trying to have at least the look of having security, but it wouldn’t take long for them to choose between life and death and basically step to one side.

“At the non-policed events you really did realise you were outside society … I don’t think we realised that things were different elsewhere. At that point, that’s what we assumed you had to do to play.

"I guess I thought that any kind of new music coming along must get this type of resistance. I didn’t realise that no it’s not the case, that this was quite exceptional, this level of antagonism and actual physical violence.” 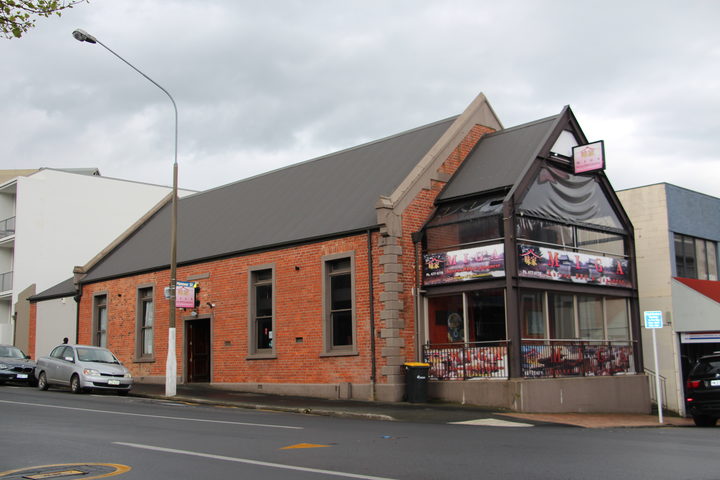 “This is the old Beneficiaries Hall ... the kind of place people would rent for $50 and put on their own gig and bring out a small PA, print up some A4 posters.

“Picture the scene - I was fifteen years old, I’d been to see the Hues Corporation whose big hit was ‘Rock the Boat’. That was my first concert.

"Second gig was early Split Enz: I was definitely the youngest person in the audience of probably 200 watching, just terrified in case one of these crazy people on stage was going to come into the audience.

“Third gig was the second gig that The Enemy did. Chris Knox used to cut himself up onstage. He was an Iggy fan and it’s the kind of thing Iggy would do. In fact, they had a song ‘Iggy told me’, which was apparently when it happened. He suddenly saw a sharpened drumstick so he lacerated his arm.

“Looking back, it was a transitional moment and I was confronted by a situation that I had never been in. One weekend I’d be going out with my disco friends where everyone would get beaten up. The next weekend I’d be going to play with my other set of friends listening to the latest record by maybe Joy Division.

"This particular gig [The Enemy gig] the surfers turned up with a pigs head, which they threw on stage for Chris to have fun with as a gesture of solidarity.

“One of the surfers took a good dump on the floor before they left that night and that’s what made the papers the next day: ‘Punk Rockers Shit on Floor’.

"The next day you’d try and explain to your teachers 'No, it wasn’t the punk rockers, it was the surfers'. They didn’t want to know. Some of my teachers were ex-hippies, but they still couldn’t see what was going on in terms of media manipulation." 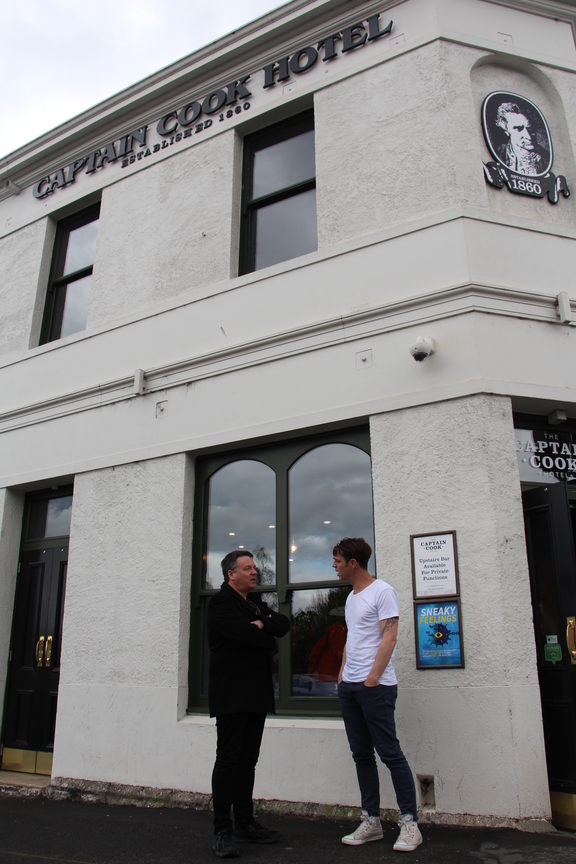 “We’re coming up to the Captain Cook, which is obviously quite a famous Dunedin venue. You’re talking back to ... James K Baxter sitting on beer crates and talking poetry and drinking with his mates.

“Big sort of hippy hang-out and then upstairs became a very famous venue. I saw The Swingers there in their early days, well before ‘Counting the Beat’. Toy Love did a lot of gigs there.

Notable Pictures is making a feature documentary about Martin Phillipps and The Chills. They're running a Kickstarter campaign to raise the final few thousand dollars needed.