Clear the way for the Prophets of Rage 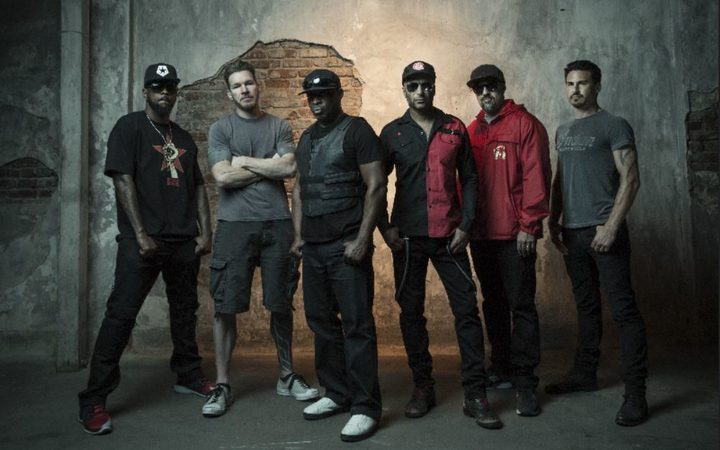 Five years later, when Rage Against the Machine released their debut, Bush Snr had graduated to the presidency, his Republican administration providing the political backdrop to the band’s ideologically-driven rock.

Fast-forward 25 years and it’s a new Republican administration that has members of both groups fired up.

Prophets of Rage is PE’s Chuck D and DJ Lord, the Rage rhythm section, and Cypress Hill’s B-Real, a new supergroup formed when Donald Trump entered the presidential race. But as guitarist Tom Morello tells it, the Prophets juggernaut would have rolled on with or without a Trump presidency.

“There certainly would have been plenty of injustice to still confront, but the Trump-Pence regime brings into sharp focus just how important it is to make a stand now,” he says. “And this album and this band is really our audition tape to be the soundtrack for the resistance.”

Chuck D is no stranger to leveraging hip hop as a political platform, famously declaring rap “black America’s TV station” in a 1988 interview with Spin magazine. He agrees that the current US political climate has provided a focal point for their music, but is emphatic about the new work’s standalone strength. “We don’t need the world to be in a chaotic, f-ed up state in order to be a strong band.”

“Your antenna is either up or it’s down, and mine has always been up,” Chuck continues. “As a matter of fact, I would like Prophets of Rage to be an antenna to let people know that you can be the spark for significant change. It comes down to one single manifesto for the band, and it’s a very simple one: the world is not going to change itself – that’s up to you.”

Prophets draw attention to police brutality, immigrant rights, racism and militarism in their music. They’ve also campaigned to drive voter registrations and connect grassroots political activists. And while Tom recognises their rage has been reinvigorated under Trump, he has very real objectives in mind for the times he’s living through, beyond its creative possibilities.

“Bad presidents make for great music, so there’s that. But also, my hope is that this Trump regime crystallises the resistance in a way that we don’t continue in the United States – and around the globe – with this sort of business as usual, where we sort of change one corporate manager for another one, and that we really aim for the kind of world… the kind of world we really want, not one that we’re willing to settle for.”