Ella Yelich-O’Connor – better known as the singer Lorde – has won the 2017 APRA Silver Scroll Award for her song ‘Green Light’. 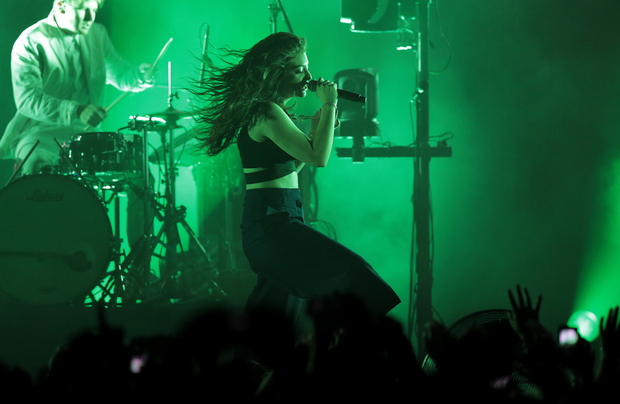 Lorde takes the prize in a historic year, in which for the first time all five finalists in the prestigious songwriting award were songs composed by women. Written from “within a fog of grief” after the breakup of a relationship, ‘Green Light’ was begun with her New Zealand writing partner Joel Little, but completed with American producer Jack Antonoff who brought the song “into sharp focus” when he “started hitting these chords - and they were so angry.” It is the second time Lorde has won the award, which she shared with Little in 2013 for their song ‘Royals’.

The ceremony in Dunedin also saw the APRA Maioha Award go to Lewis de Jong, Henry de Jong and Ethan Trembath of teenage thrash metal band Alien Weaponry for their song ‘Raupatu’. The song, with lyrics in te reo Māori, is about land confiscations by the colonial government. Lewis de Jong says the power and complexity of thrash metal makes it “a great vehicle for expressing real stories and emotions".

“It also works with te reo Māori,” adds his brother, Henry. “Both the musical style and the messages have a lot of similarities with haka, which is often brutal, angry and about stories of great courage or loss.”

The Best Original Music in a Series Award was won by Auckland composer Claire Cowan, with her score for the six-part mini-series Hillary. A multi-instrumentalist with an honours degree in composition, Cowan approached the music for the story of New Zealand’s mountaineering hero by thinking of each character as an instrument.

Wellington-based Tim Prebble won the Best Original Music in a Feature Film Award for his work in Samoan New Zealander Tusi Tamasese's character drama One Thousand Ropes. The composer, who has previously worked on everything from short features to documentaries, often incorporates sounds of the natural world in his compositions. This time, his score called on performances by the Tudor Concert Choir and Aroha String Quartet.

Traditional Māori flute the pūtōrino is the inspiration behind Salina Fisher’s 2017 SOUNZ Contemporary Award-winning work Tōrino. Commissioned in 2016 by Chamber Music New Zealand for performance by the New Zealand String Quartet, Tōrino is based on the pūtōrino playing of taonga pūoro musician Rob Thorne. This is the second consecutive year Fisher has won the SOUNZ Contemporary Award - New Zealand's premier composition prize. In 2016 she became the youngest-ever winner for her work 'Rainphase'.

And influential Dunedin band The Clean were admitted to the New Zealand Music Hall of Fame, having turned down the honour twice before. "We didn’t feel like we were part of the industry and it just didn’t sit right with us at the time we were asked", bassist Robert Scott said in August. But the death three years ago of founding member Peter Gutteridge, plus the fact that this year's Scrolls would be held for the first time in Dunedin, contributed to their change of heart.