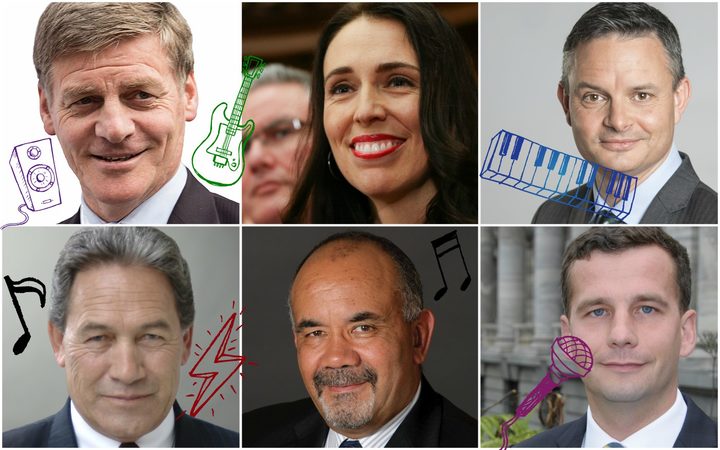 It's probably not going to influence anyone's vote, but we love finding out what our politicians are listening to.

Here's how our party leaders responded when asked who their favourite band was. The results are enlightening:

"I'm a Split Enz fan. I've really enjoyed them. The bands from my generation - I'm a Dire Straits fan. I quite like listening to them.

"But I like listening to a whole range of music. Because my kids have been musical I've listened to a lot of choral music, sort of modern New Zealand choral singing, which I really like. So not always a band."

"Oh I have quite a few, there's nostalgic ones - I've always loved The Beatles - but I'm a child of the nineties so I equally love Smashing Pumpkins and Shapeshifter, one of the most long-standing bands I've followed has been Shapeshifter."

"I've got a lot of favourite bands. I love music, and all sorts of music and frankly one of the greatest things you can have in the stress of life is a love of music.

"You go home when you're stuffed, tired, annoyed and bitterly disappointed by a day's events and you have one hour listening to that and you're different.

"I honestly think that not enough people understand and love music enough.

"Now Suzi Quatro was a young woman who started off when she was about 15 and shot off to New York and started her own band and she was a stand-up rock 'n' roller from way back then and she was also a guitar player.
And she was a kind of person who just emits this love of what she does."

"I've been listening a lot to The Killers recently. But one I've always come back to is Parov Stelar. They're incredibly funky. It's electric swing."

"I reckon it's probably the Doobies. Michael McDonald, in particular. He can sing, that fella."

"Crowded House - the tones of the Finn Brothers' voices in some of the lyrics for me really capture a lot of New Zealand.

"If you take a song like 'Together Alone', I interpret it as about Māori and Pākehā together alone in New Zealand. That was the eighties [and] it's a bit outdated - there are now many strands to New Zealand - but they really captured a lot of New Zealand at the moment."