The five finalist songs for the 2017 APRA Silver Scroll have been announced - and for the first time ever, they are all by female artists. 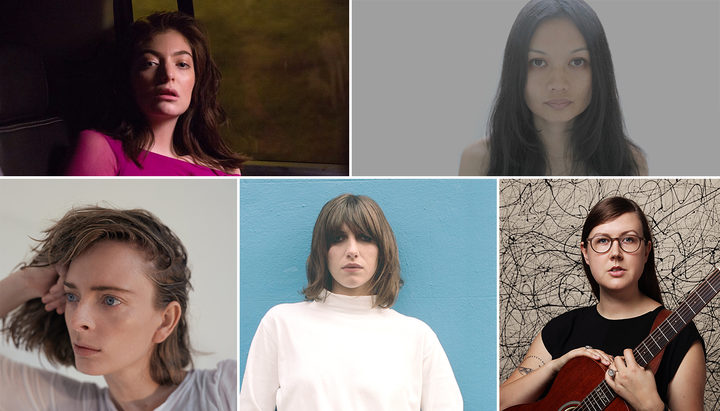 The songs are (jump to a playlist and artist biographies below):

The annual award recognises outstanding achievement in the craft of songwriting and is voted for by the Australasian Performing Right Association (APRA) membership, which represents over 10,000 of New Zealand’s composers and songwriters.

The five finalists were pared down from a notably eclectic and diverse long list of 20 songs selected by a panel of judges earlier this year.

An all-female top five is a first for the prestigious 52-year-old award. Another first is the new preferential voting system that has allowed the body’s membership to rank their top five songs, where previously voters could only choose one song from the long list, or have the winner determined by a panel.

In July this year, APRA acknowledged the need to address the gender imbalance within the New Zealand and Australian music industry, after it was revealed that only 21.7 percent of APRA writer members identified as female.

"We want to make sure that in the initiatives we put into the world, that the performances we give, the seminars, the judging panels, all the different things that we do, that women are well represented with 40 percent representation in those things."

The number of co-written songs in this list of finalists suggests a continuing shift from the award being a marker of individual talent. The majority of previous winners from the past five decades have been by solo songwriters such as Dave Dobbyn, Don McGlashan, Shona Laing, Neil Finn, King Kapisi and Brooke Fraser.

This year’s emphasis on collaboration could be seen as a reflection of the international trend in which hit songs are increasingly written by committee.

This year’s top five sees the return of past winners Bic Runga (1997 for ‘Sway’) and Lorde (2013’s ‘Royals’) and an approving nod to other female artists who have recently gained considerable international attention: Aldous Harding, Nadia Reid and Chelsea Jade.

The sonic palette of this year’s finalists strongly showcases both the folk and electronic talents of New Zealand’s songstresses - not that these aspects will necessarily be highlighted at the 28 September awards ceremony.

Under Silver Scrolls tradition, a musical director selects an artist or band to perform a live cover version of each of the nominated songs. This year, it will be Shayne P Carter who chooses who will play the songs, which will be performed at Dunedin's Town Tall.

Bic Runga, last year’s New Zealand Music Hall of Fame inductee, received the award one day before releasing her fifth studio album, Close Your Eyes. The album was produced in her home studio with Kody Neilson, in between the demands of family life. With three children in the house, it wasn't easy. As she put it: "Sometimes they are literally screaming, banging on the door, and we're all, 'Go and watch telly! Go and eat some chips!' It had its toll on the family, but we're really proud of it, and I owe it to the kids and all their chip eating to make the best of this, because it was really hard work."

At age 16, Ella Yellich-O'Connor burst onto the international scene with debut album Pure Heroine, which went on to win two Grammy Awards, much chart success and critical acclaim.

She wasn’t sure that would be the case with ‘Green Light’ but as she explained to RNZ's Kim Hill prior to the release of her sophomore effort Melodrama, she was glad her fans trusted her.

“I actually feel more kind of light and open and calm in the last three months than I have probably in my whole life. Because it’s the most incredibly freeing knowledge to know that, you know, to an extent, people want to go with you and see the world inside your brain.”

Previously making music under the name Teacups and Watercolours, Chelsea Jade is no stranger to the local music scene. But now that she has finally settled on using her own first and middle names, she has moved to Los Angeles and embraced a collaborative songwriting approach, which she has said removed the ego of making songs. Recently Chelsea Jade was awarded the biennial APRA Professional Development Award.

Despite music being the family business, Aldous Harding has said she never wanted to be a musician. Yet for most of this year she has probably spent 11 of the 12 months extensively touring Europe, the United States, and a few dates back home captivating audiences with her unique live performances. Not to mention television audiences too, with her appearance on Later with Jools Holland alongside Lorde. She has also received critical acclaim for her latest long-player Party which features the Silver Scroll-nominated 'Horizon'. And she's even road-testing some new material, which she is keenly writing.

"It’s cutting, it’s wistful, and fully deserves to join the rich canon of songs dedicated to jilted lovers throughout the ages (refer to Carly Simon’s 'You’re So Vain', the entirety of Beyonce’s Lemonade)," we said of Nadia's song 'Richard'. The Port Chalmers native has harnessed a maturity and assuredness on her latest album, Preservation. Currently on tour in Europe, like her friend from adolescence Aldous Harding, Nadia Reid is gaining an international following and fans who reckon she's saving folk music. Interesting fact: at last year's Silver Scrolls, Nadia performed a cover of Lydia Cole's 'Dream'. Who will perform the cover to 'Richard'?