A week in the life of Mermaidens

Last Friday Mermaidens released Perfect Body, the Wellington band's first album on Flying Nun. We gave guitarist/singer Gussie Larkin a sound recorder in the week leading up to the release, to give an insight into what can be a busy, anxious, and giddy time for a band. 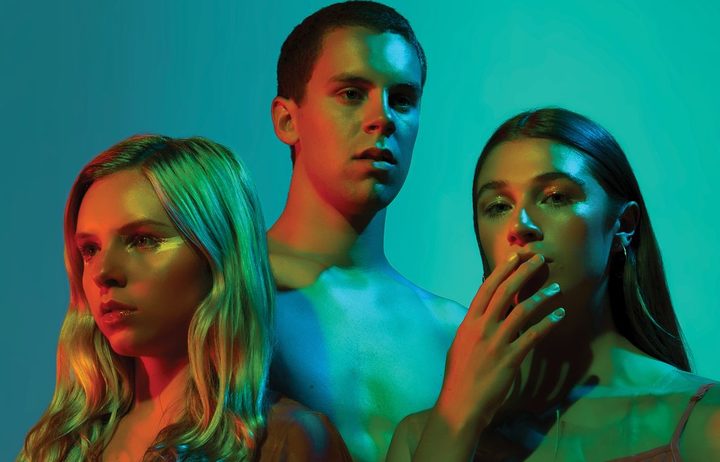 I’ve just done an interview with RNZ Concert, about a collaboration with Wellington chamber choir Nota Bene. I’ve arranged a  song from the album for the choir to sing, and we’ll be playing alongside them in an amazing catholic church on Sunday.

We have a U.K. Publicist who just sent us a review of the album by Vulturehound. It got four stars! It was a really good review.

There’s two boxes of ‘Perfect Body’ records here! Ready to sell at our listening party tonight at DeathRay in Newtown.

Before that, we’ve got a dress rehearsal for our concert with Nota Bene. I’m just a little bit worried about how we’re going to get the balance between the band and the amplified factors and then this really beautiful, unamplified choir. We’ll see how it goes.

So we’re at our listening party, got some pizza, got some beer, there’s quite a few people milling around the shop. Been selling some t-shirts, and we’re listening to the album.

Gussie: Hi Dad - what do you think of the album?

Dad: I…. thought it was quite… gentle, actually.

Gussie: Yeah, yeah. From playing in the church today, playing through the last song on the album, ‘Fade’, I was like ‘this is not Mermaidens’, it was really soft and lovely and beautiful.

The main thing about the album is that it’s very dynamic, and the bits that are loud are huge and thick but then there’s songs like ‘Perfect Body’ which has really gentle guitar parts. 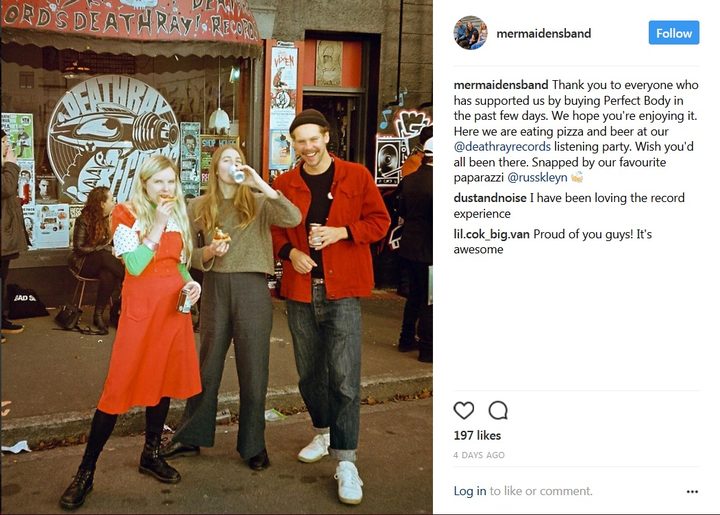 It’s been a hectic few days. This morning I had a bunch of emails in the band account of reviews of the album because we’ve just had an album stream go up on a U.K. blog. One called ‘God Is In The TV’ reviewed the album and gave it a 9 out of 10.

So, feeling good. Feeling good about myself. Our living room is looking like a warehouse full of giant boxes of t-shirts and records, heaps of gear everywhere - it’s quite shambolic.

Release day! I’ve been doing heaps of emails and refreshing my social media lots.. I had an interview at Radioactive, Lily had one on Radio One and Abe took the Bfm one tonight.

In my lunch break, I was just going to go down to Slow Boat and RPM and pretend to be a customer, and look through the records and put ours at the front.

But neither of them had it! This is not ideal. I’ll have to take them down some of our personal stock tomorrow.

Gussie: So Lily, do you think it’s a good album?

Lily: Yeah. And that’s a hard thing to say, because so often you listen back to something and you pick out everything that you’d do differently. Do you do that?

Gussie: I’m at one with this record. When we first started making music five years ago, did you hope that we would get this far?

Lily: That was part of the fun of it, because we both had this fantasy to be the band that we were going to see on the weekend - on the stage, in the lights, and now that it’s real, I feel like a grown up.