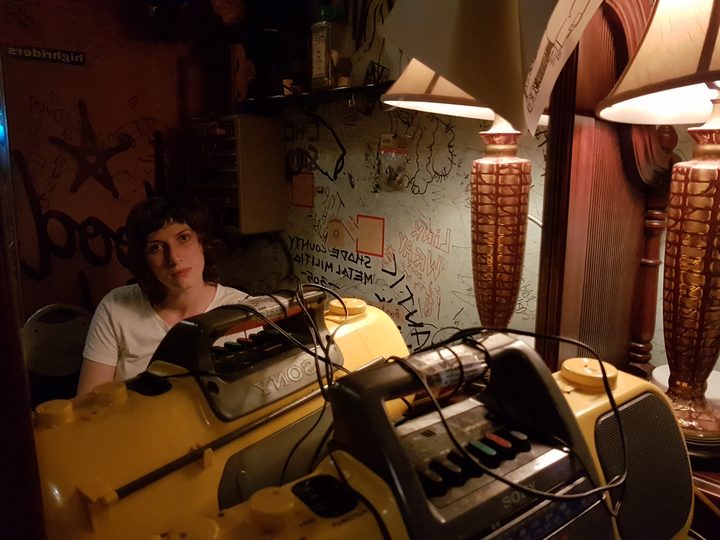 A man vomited in the front row of Aldous Harding's Brooklyn, New York show during the last song 'Horizon'.

"What I would like is for people to hear that, and people who don't like it can be like, 'Heard someone threw up at Aldous' show. Hashtag my thoughts exactly'."

Aldous Harding has not lost her sense of humour on this never-ending tour, and you get the sense she knows how polarising her performances are.

The story behind the headline is that the air-conditioning had been turned off because it was too noisy, and it's summer in the Northern Hemisphere. It just got too hot, and the man over-heated.

Like the true professional she is, Aldous played on, with only a slight break from the stern character she portrays in 'Horizon'.

"They put this velvet rope across the area, so this corner was quarantined, and I did the 'Here is your princess' gesture towards the area, and I couldn't help but laugh a little bit."

She's touring eleven months of this year. "I was shown the schedule, and I said 'Yep, whatever it takes'. I mean I'm tired, but you know, we're killing the shows, and I don't feel... mind you it's only June. But I'm smart enough to pull back in whatever ways I have to cope. Or it might kill me."

Aldous' lone band member for this tour is Jared Samuel, a New York native who has worked with artists including Sean Lennon, Yoko Ono, !!!, and Martha Wainwright. His own project is dream-folk band Invisible Familiars.

"He can really play" says Aldous, who questions why he plays with her, when she has him doing minimal, textural accompaniments. "We get on really well" she admits, and says that an essential part of their pre-show ritual is having an hour of time alone, to "make each other laugh, hold hands, just get into a kinda... thing? ya know?"

Despite releasing her sophomore album Party just over a month ago, Aldous says she's obsessed with the new songs she's writing. A couple are already being road-testing, morphing as they go.

In May, Aldous was part of the first ever all-female line-up on British late night TV show 'Later... with Jools Holland,' alongside Lorde, Jane Birkin, Oumou Sangaré, and Pumarosa.

"I met Ella [Yellich O'Connor] on set, she walked over and said 'This is your first television performance, right? It was mine, too.' I said 'I don't really know what to do with my hands.' And then afterwards we had a chat, and she's super lovely."

Aldous has recently released the third video from Party, 'Blend' which sees dancing in a blue bikini, gun holsters at her hips, white fishnets and cowboy boots. It's a reference to a scene in the Francis Ford Coppola Vietnam film 'Apocalypse now.'

"I watch that movie, probably once every three weeks. I just think it's the best thing I've ever seen.That playmates scene, I just thought - god, that's disgusting. She's not having a good time.:" Quick to assure that there are no correlations to be drawn between her and the stripper, she says "to get any woman half naked and have her dance, exposed like that, it's an interesting concept."