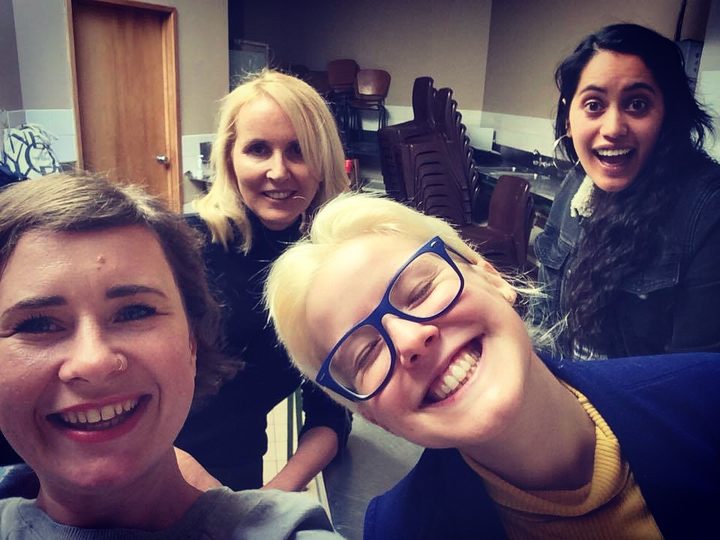 Equalise My Vocals aims to address issues brought to the surface by a story published last year by The Spinoff, outlining serious allegations of grooming and sexual predation in the local music industry.

“We saw a lot of hurt people… a lot of people frustrated and in pain, and who were just excluded and don’t have a voice,” says Jessica Hansell - aka Coco Solid - who's spearheading the campaign alongside fellow musician Trixie Darko. 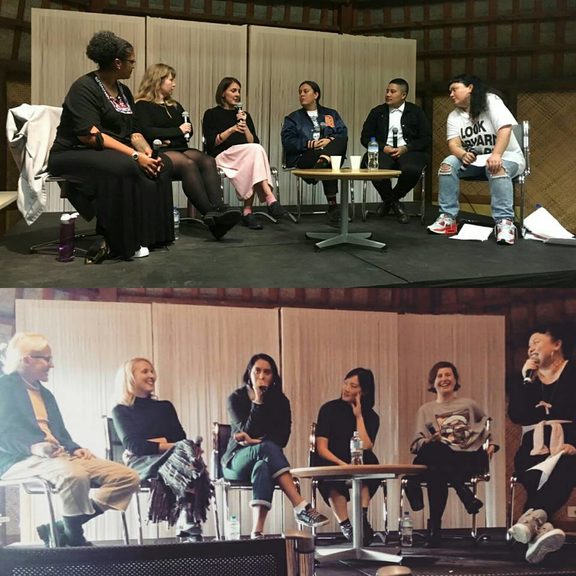 And so, on a crisp autumn afternoon in Auckland, a group of people gather in the high-ceilinged fale of Samoa House to talk about one of the things they love most in the world - music.

Hailing from different backgrounds, but united by a love of organised sound - the rapper, the beat-maker, the singer, the broadcaster and the journalist share experiences from their collective 70-ish year careers.

They are not dissimilar to other groups gathered to talk publicly for New Zealand Music Month - except where most of them are majority-men, this group of music-lovers identify as women, non-binary or trans.

The event is a panel, one of two organised for the weekend to bring Equalise My Vocals from its online domain into the real world. Its aim - to bring together stories and experiences from everyone, "not just a chosen few” says Jess.

Here are some of those stories.

For links to info on the panellists, head to the bottom of this article.

"The NZ Music Industry is 95% ‘GCs’ and 5% dicks, and that’s the same for any industry. Most people are good people and they’ve got good intentions. But you can’t be a reflection culturally if you’re not reflecting the people… [and] most of the media’s white, most of the music industry is white.

"That’s not on each of those individual people, they’re not going ‘yay white supremacy’, they’re just going about their lives … It falls on the shoulders of the heads of each major record label, and each government funding agency. You’re actually only talking about 20-30 people whose job it is is to make sure that their organisation reflects Aotearoa. So they’re the ones that aren’t doing their job, in my opinion."

"I remember making music before figuring out my identity … it was kind of a crazy time because I was making music and then it gained attention and then I was like ‘oh whoa! I’m trans! ‘ … [I] remember getting hit up to do interviews but I wasn’t out yet, and it was very awkward ... The older I get, I feel a lot more confident … I’m more proud, and I know who I am.

"Sometimes when you come out as trans you don’t want to make a big deal of yourself, or like, "Oh you’re using the wrong pronouns" constantly - you kinda feel like you’re the one making a fuss. But now because of panels like this I’m like, "Oh ok actually I can stand up for myself and it’s not me being a diva."

"I grew up in a bubble. The bubble where everyone’s intelligent and smart and interesting and they know Māori. Which is a really wonderful environment to grow up in but after high school I realised that it was a bubble.

"About the time of the Rugby World Cup I realised that the Māori identity was consolidated down to rugby and haka. And haka is very important to me, so when drunk people do it in the street it upsets me. [But] in countering it - you’re only one person so - I can sing, I can write, I can speak Maori, and that’s what I’ve been doing." 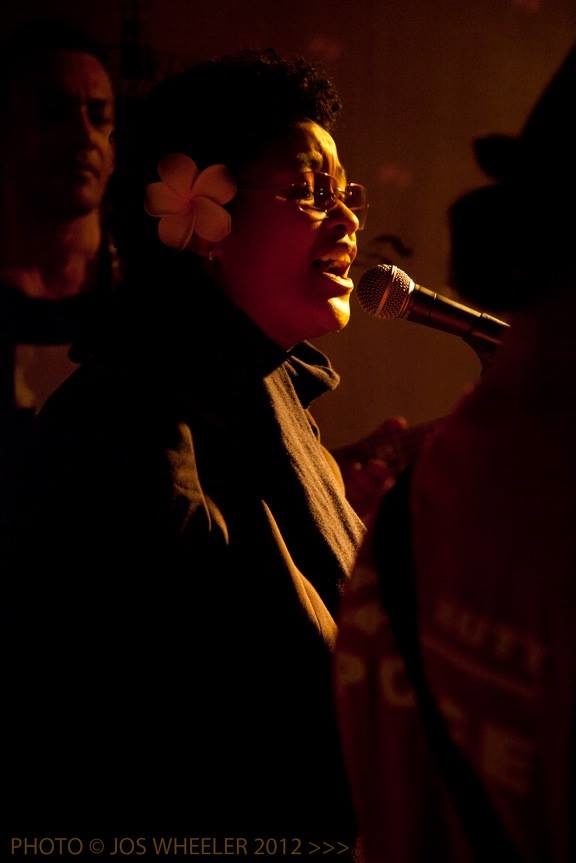 "My husband is a rapper right? And I’m his DJ for the best part of the time. And what I’ve noticed in the industry is he can get as big as he wants … weight-wise, but as soon as I do it, people are devastated. I remember I did a live performance with my husband and somebody tweeted and said, "I guess Teremoana ate all the pies." Because they hadn’t seen me on television for 20 years … I was like, "I’m done with this shit." And that’s why I had to step away. I looked at my babies and thought, "You’re way cooler than this rubbish I’ve been part of."

Karyn Hay (On directing music videos, including for Shona Laing)

"Shona always resisted the pressure to look glamorous - from not just NZ record companies but international companies when she was on the verge of international stardom. And I really had to fight against that in my own head, because my own programming was, "Yes that’s right! She’s a female in a music video so she has to look glamorous!" And she’s just not that person.

"I made three [music videos] for Shona and we worked really well together in that we decided she could just do what she wanted to do. [But] because she didn’t dress up the way that they wanted her to dress up … it really affected her career.

"There’s a hell of a lot of pressure - whether you’re a male or female director - but I think … it’s a responsibility to not just do what you’re programmed to do. And you’re programmed from a very early age - especially in a country like New Zealand … [to] put people in boxes; ’this is what they look like’ and ‘this is how you sell them’ … and, "I have this girl that I’m going to get from a modelling agency and she’s going to come in and be the love object." That was then, and I still see it now and I find it really disturbing. So I try to rally against that."

"I had an agent when I was about 3 years old. My background in acting was very restrained as to being what I looked like and what role I could fit into in someone’s script. So as a musician I’m able to express what is actually happening inside, or what I’m observing … and I’m actually allowed to have an opinion. Before it was about the marketability of my appearance and my gender and my whole outlook was completely consolidated into that one product."

"I quite like being scary on stage … and music really lets me do that. Doing kapa haka in High School - it was a way of connecting with that scary, bitch quality that every woman and man can have."

"When I first started making music I would get approached by people who’d stay stuff like, "Oh! Did you sing on that track? Who made it?" and it was like, "Well I did all of it." It pushed me to want to become more technical, so I taught myself the whole process … just to be like, ‘that was me’. And also, it’s fun to learn, and on a logistical level, it’s much easier than having a band.

"I think it comes back to visibility … I feel like because there aren’t a lot of Asian musicians doing more underground or electronic music … it makes you feel weird about putting it out there."

Kat Saunders: "That’s one of my favourite things about the club nights we do with the Super Rad Babes. I’m not a good DJ… I love music and I love playing my tunes but I can’t mix for shit. And I wanted to do these club nights and create these spaces anyway, and show my friends and other people that wanted to do this too - it doesn’t have to be a male-dominated space… everyone can have a go. One of my favourite things and most rewarding things is when I see people trying it for the first time and they get such a kick out of it. That’s just the best feeling."

Coco Solid: "Yeah! Because how else are they going to practice and get good?… We did an interview with Jessie Moss who is a researcher, [and] gender imbalances in local music was her thesis… She said that a lot of men often give each other that room to make mistakes and practice and get good, whereas often for us it can be ‘you better debut and be immaculate. You better come out and skin people alive and be perfect otherwise we can’t get down with that.”

Nikolai: … "The guys that come and watch everything that you do, that pisses me off so much. It’s like ‘yeah bro, I’m playing this song, yep you requested this, you can piss off now.’.. there’s too many of those guys in the Auckland DJ scene, that have to have their 5 cents."

Leonie Hayden: "My friend who’s left handed got told she’s holding her guitar wrong. She’s like ‘I’m f***ing left handed! You really think I’d play a gig if this was the first time I'd held a guitar?!"

Kat Saunders: "And I think that’s one of the things as women and non cis men - it holds us back, that scrutiny."

ON WHAT THEY WANT TO CHANGE

"I always feel most satisfied when I’m in a space and i feel like everyone is being respected and considered … The other night I went to a queer open mic night and it was just like everyone was visible … There was a lot of warmth and care and I was like, “Cool. This is what I want out of music".

"Because before I started going out to shows I spent a lot of time in my bedroom … and I just felt super isolated and kinda depressed. Creating and sharing was this thing to get me out of my room and feel like actually there is meaning. Not to sound like an emo!"

"If we can’t protect people like us then what the f**k are we doing this for? Music is supposed to be safe, an escape, it’s supposed to be fun and people’s careers have been built on the backs of women and trans people, non-binary people, people of colour doing a lot of work that’s been un-thanked, used and tokenised."

"[Music institutions now] have been set a certain standard - people want to [discuss these isues], people want to tell these kinds of stories … They’ve been given the ‘proof’ that they need to make a contribution, so now it’s up to them to actually do something that has some kind of meaning.

"NZ Music Month previously hasn’t meant anything to me, which is why we hijacked it. Because NZ Music Month is for musicians, it’s for people who consume music, who like music … You want to call it that? You better start investing in the people who make it possible for you to get paid."

Information on the panellists: