A fry-up with the All Day Breakfast Stringband 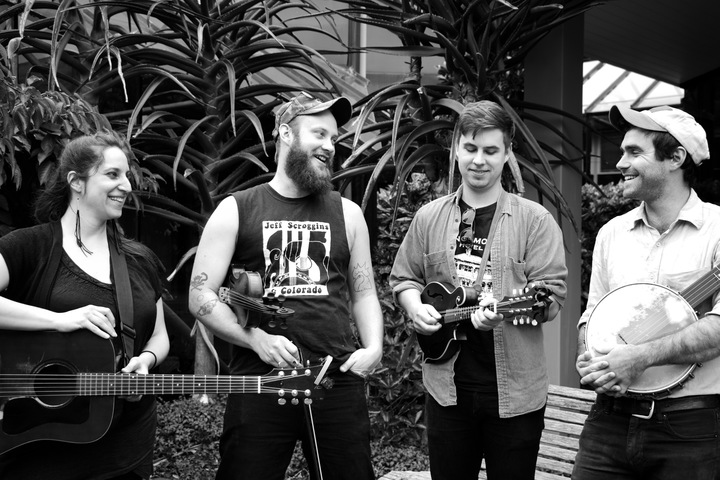 Fiddle, guitar, mandolin, banjo, and close harmonies are the ingredients going into The All Day Breakfast Stringband's skillet. The Montreal-based band are in New Zealand doing an extensive tour, and hoping to get some squaredances started.

The All Day Breakfast Stringband are proponents of a style of music that emerged from the crevices of the Appalachian mountains at the turn of the last century. “Old-time” music came from the tunes and songs of the British Isles, mutated through a couple of hundred years distance from the old countries.

It is played on stringed instruments including the banjo, an instrument which had developed from its earliest, crude form by African slaves, fashioned out of gourds, animal skins, wooden broom sticks and catgut strings. Joined by the fiddle, mandolin, and guitar, the music has propulsive, trance inducing rhythms and melodies, perfect for a barn dance. The All Day Breakfast Stringband are in Aotearoa hoping to get some square dancing started while they’re here.

Canada has its own folk traditions, notably fiddle music that came from Scotland and France.

“None of it really resonates with me. There’s a drive, and a spookiness to the American music that I just don’t find in Canadian music” Max says.

He says he was hooked on old-time after attending an Appalachian Stringband Festival in Clifftop West Virginia as a teenager.

“I’ve always been interested in ‘outsider’, oddball music, and these weird field recordings of tunes that are really hard to learn, and the idea of creating a library of music in your head appealed to me.”

Asked what type of person is drawn to this music, Max immediately identifies "professors and woodworkers." And it's true of their band at least - Dara and Andrew teach music to school children, and Max builds sets for the film industry. Sean, who is living in Dunedin at the moment, and filling in for the band's regular banjo player who couldn't make it over, says he works and teaches when he needs to "to supplement my music habit."

Sean says "it's quite a wide variety of people that take an interest in this music - that's the beauty of it. You go to these festivals, and you've age ranges from toddlers running around holding instruments, to people in their late 90s. You find yourself sitting in jams with doctors, straight punks - people that you might not otherwise have much to do with. This music is what brings you together. That's what I really love about it."

The band have been playing together about five years, and taken out awards at the aforementioned ‘Clifftop’ Stringband festival. It was there they met New Zealand fiddle player Flora Knight, who was over learning from Ben Townsend, a friend of theirs. She offered to set them up a tour – and they took her up on the offer. Playing everywhere from Totara North to Barrytown, the All Day Breakfast Stringband are half way through their New Zealand tour.

Kirsten Johnstone learns more about them and the traditions they bring at the audio link above.

Catch the rest of The All Day Breakfast Stringband NZ tour here: