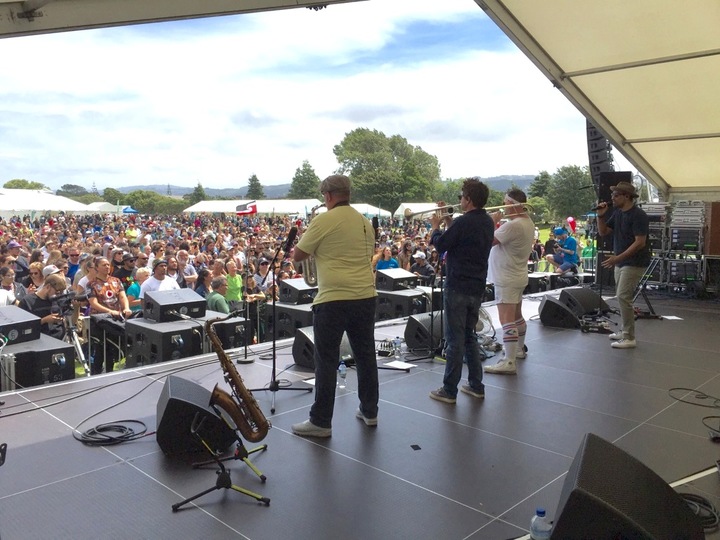 Nestled at the end of Whites Line East, at the foothills of Pukeatua, the maunga where the road winds up and over to Wainuiomata, Waiwhetū Marae is a thriving, living papakāinga complete with a radio station, medical centre, sports ground and a wharewaka. Every year for the past 23 years Atiawa Toa FM have hosted a one-day community event known as Te Rā o te Raukura, held in the expanse of Te Whiti Park.

Wairangi Luke, one of the original instigators, explains the event’s humble beginnings.

“We built a little whare across the road there and it was our radio station 23 years ago.” Wairangi points to what is now a road across the gully from the sports ground where we stand. “We had a platform stage that we built ourselves, it was of course very different to what we have today.”

Today, the scale of the production is on a vastly different level, Noel Woods, Production Manager and, “homeboy of Waiwhetū Marae” explains.

“We’ve got two stages today...this production here is big enough for the international level - the UB40s, the Raggamuffins. The sound system we’ve got today is huge...We’ve grown from 500 people [attending] to 2000 people. Now we get ten to fifteen thousand people.”

Noel is also a Breakfast announcer on Atiawa Toa FM, and is the persistent individual responsible for Fat Freddy's Drop headlining the event.

“I’ve been emailing them for eight years, since I’ve been in charge of the production”

“How cool is it for Fat Freddy's to do that?” says Noel, “It just goes to show the quality of these guys, they’re more than a band. They’re a community.” It’s a sentiment reiterated by Fat Freddy's Drop. Performing at the festival was a chance for Dallas Tamaira to return to Waiwhetū Marae, where the singer filmed a music video for the title track from his 1999 solo album Better Than Change on the marae.

For a band that fills European concert halls and local outdoor vineyard parties, it is the opportunity to give something back that keyboardist Dobie Blaze A.K.A. Iain Gordon concedes is tricky nowadays.

“The scale of the production we demand now to be able to perform the way need to requires a lot of guys...It’s good  for us to be playing a free festival in Wellington to support the kaupapa”

Before Freddy's take the stage for a 2-hour slot, Iain and I are taking in the Wellington Batucada who are getting the crowd on their feet and moving to their samba rhythms. It’s particularly exciting for Iain as his Mum, Ngawara, and sisters, Jane and Airini, perform in the troupe. 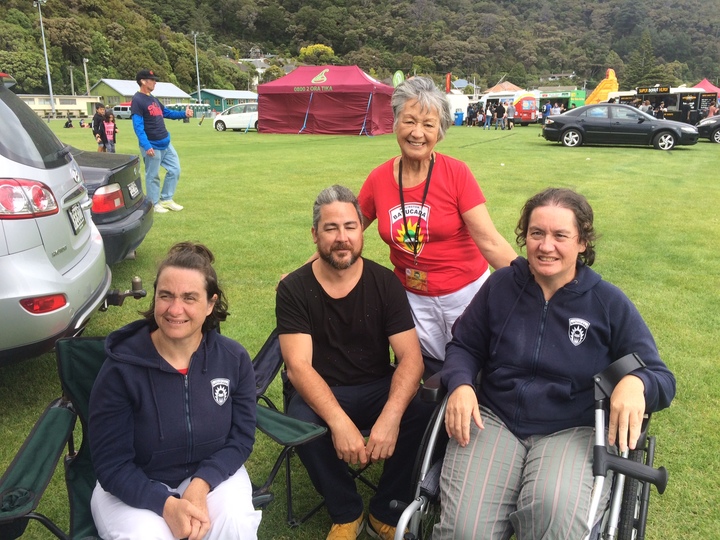 It’s the first time the Gordon family have shared the stage, for Ngawara and Jane it’s a real source of pride, “we’re the warm up act!”, they exclaim.

Batucada is a really important past time for the three women, as Ngawara explains:

“One of the things that endeared me to this band playing is that both my daughters are disabled girls and it’s very difficult to find something where they’re part of the ‘ordinary’ community.”

Jane plays her surdo (a Brazilian bass drum) from her wheelchair, which is occasionally pushed by Iain when the Batucada are marching.

Inclusivity is a very important aspect for the family. The band director “knows that Jane can keep a good rhythm so he tailors her playing. She may play half the rhythm, but it’s still in time.” says Ngawara, who is visibly proud of Jane, and of her other daughter Airini, although she thinks she's too ambitious in her instrument of choice.

The mother and daughters have been in the Batucada for nearly a decade. Ngawara is proud of being the first Gold Card holder in the percussion collective. It’s her way of keeping fit and active. “It really sets you up for the week”, she says.

The therapeutic power of music is an underlying theme of the festival, and it’s one that the organisers use deftly. While the mainstage and rangatahi stage are central to the festival, it’s the other areas that really illustrate Te Rā’s kaupapa.

Besides the amusement rides, entertainment and varied food offerings, there is a significant presence of public health outreach, and education providers Weltec and Te Wananga o Aotearoa.

Noel explains, “The health is huge, it’s part of our kaupapa ‘arohanui ki te tangata’ which means goodwill to all of mankind. So we want to make health and education huge.”

An onsite medical team offer health Warrants of Fitness to festival goers, “every year about 300-400 people get checked. Some of them are so serious that an ambulance has taken them to A&E.

“Some of our people out there can’t afford to go the doctor. This is pretty much their annual fix in terms of their hauora and health.”

For the last two years the festival has been a water-only event, as well as being smoke-free, and alcohol-free. Further illustrating the organisers’ commitment to promote health in their community. Next year, Noel says that there will be an additional focus on healthy food options.

And with that Noel hops on his mountain bike, walkie talkie in ear, to get back to his duties.